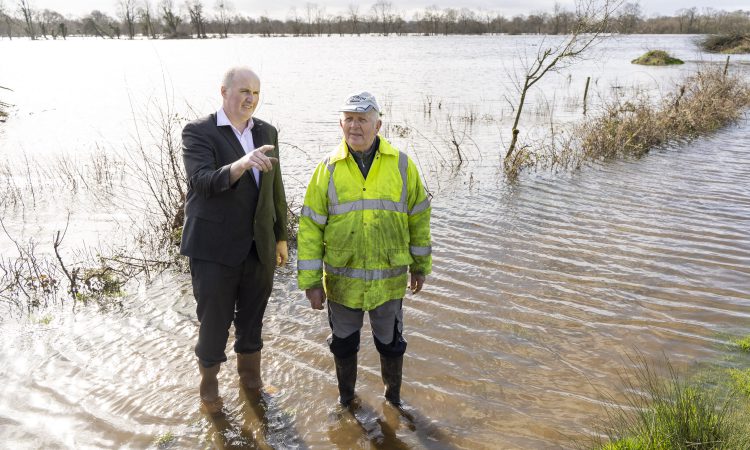 Several hundred acres of farmland around the country are flooded at the moment after weeks of heavy rain, with farmers in the worst-affected areas trying their best to cope with the water on their farms.

Donal Hynes is a dairy farmer in Co. Limerick, based about half a mile from the River Shannon and just to the north of Limerick city. The images below – in which Donal is pictured with Pat McCormack, the president of the Irish Creamery Milk Suppliers’ Association (ICMSA) – show the extent of the flooding on his land.

“There’s about 60ac to 70ac flooded out of a couple of hundred acres. You can’t go near it at the moment,” Donal explained to AgriLand.

All his cows are inside at the moment, though, in ideal conditions, they would be going out in the coming days and weeks – which is now impossible.

“If we had the weather, we would get them out of the shed before the end of February. We have no hope of doing that now,” Donal said.

The biggest difficulty for Donal, he explained, is getting slurry out, which he is managing to do “bit by bit”.

Five years ago, Donal’s land fell victim to another massive flood. He is predicting similar hardship this time around.

“It was really bad five years ago. That was extreme. Water was on the land for five months, and grass was dead when the water cleared. It’s nearly as bad now.”

That time, Donal had to re-seed 30ac of land, and he’s expecting to have to repeat that process when this flood clears.

“You get no help in this situation,” he remarked.

One of Donal’s “biggest complaints”, he said, was the lack of river maintenance on the surrounding waterways.

This, he explained, would clear the waterways of obstacles such as trees and sand banks, thereby removing obstructions to the free flow of water and reducing the incidences of flooding.

“[Authorities] talk about flood defences…but nothing is being done about river maintenance.

“There’s trees that can fall into the river, and sand banks have built up… They’ve never been touched. High water is able to get away,” Donal said.

He pointed to the example of another river in his locality, which meets the Shannon near the University of Limerick (UL), which was cleared a number of years ago. According to Donal, there’s been “very little” flooding there since.

Not only is there the damage that has already occurred, and is currently occurring, but there will also be damage caused when the flood waters recede – however long that talks.

“This is a problem that will only get worse as time goes on,” Donal stressed.

Donal was visited earlier today, Monday, February 24, by Pat McCormack, the president of the ICMSA, who, after seeing the situation on Donal’s land, called for a “single waterways authority to which all other agencies – semi-state and local authorities – must defer”.

It is impossible to formulate a strategy to deal with the much more frequent and increased scale of the flooding if we have several agencies – often with conflicting aims and policies – all attempting to shape governmental response.

“We have been saying for at least five years that we’ll have a single waterways authority and it’ll have to be given primacy with the other [agencies] – all deferring to this single authority in terms of the ‘what, when, where and how’ of flood planning and response,” McCormack said.

“The present system isn’t working and the farmers, like the Hynes family, are looking at massive damage lasting weeks, if not months,” the ICMSA stressed.

“It is indisputable that much of the damage here is down to the inactivity of other actors, often state agencies…the ICMSA’s opinion is that the flooded farmers have a fund established from which they could be paid compensation,” McCormack concluded. 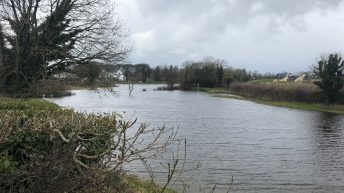