Milk prices are set to fall again for August returns, according to latest figures from the Milk Market Observatory (MMO).

The average farm-gate milk price across the EU has fallen over 20% in the last 12 months and the latest MMO statistics suggest that it will fall a further 1.3% for August supplies.

The MMO figures also estimate that on average Irish milk prices will fall by 1.3% for August returns to just under 26c/L. Irish farm gate milk prices in June were 23% lower compared to June 2014. 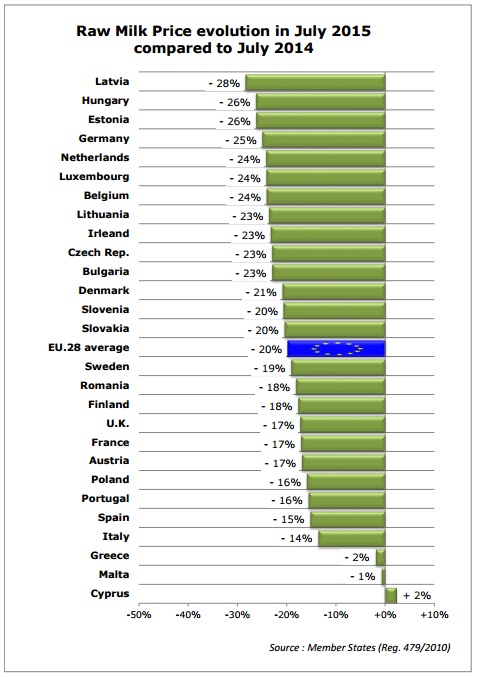 The latest milk price statistics from the MMO come in the wake of a €500m farmer support package announced this week by the European Commission.

Commission proposed that the most significant part of the package will be provided to all Member States in envelopes to support the dairy sector.

In determining the distribution of this aid, we will ensure that it is fairly distributed, targeted and effective, having particular regard to those Member States and those farmers which have been most affected by the market developments.

The Commission’s intention is to provide maximum discretion to Member States to reflect their specific situations.

The Commission said the announcement should be seen in the context of considerable support already provided to the agricultural sector in response to the impact of the Russian ban and the level of support that the EU provides annually to farmers and rural communities, amounting to more than €50 billion.