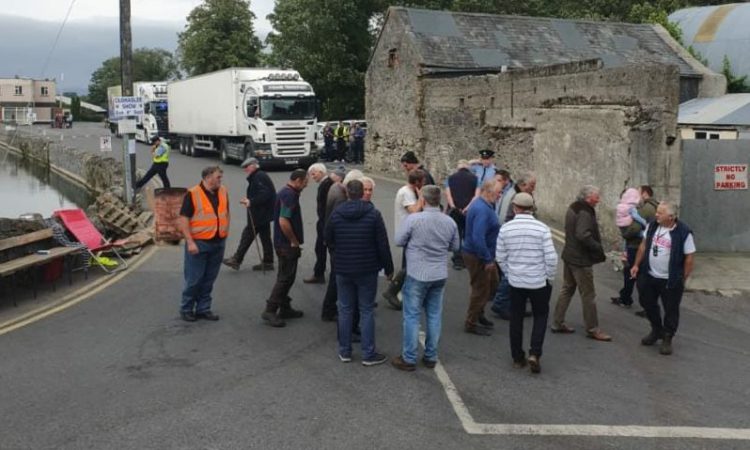 Following discussions that ran into the early hours of this morning, Friday, September 6, an agreement was struck between the farmers protesting and the beef processing facility in Rathdowney, Co. Laois.

Speaking to AgriLand, one of the farmers at the protest in Rathdowney explained that seven farmers were due to appear in the High Court this morning. However, these injunctions have now been withdrawn.

According to the farmer, the injunctions were withdrawn on the condition that 12 loads of beef were allowed to exit the factory between last night and this morning.

The farmer noted that, once the 12 loads of beef have exited the facility, the farmers would continue their protest as it had been.

The farmer added that this morning “about 20-25 farmers maintained a presence at the factory gates”.

In an update this evening, a representative for Dawn Meats told AgriLand: “Dawn Meats’ motion for attachment and committal against a number of named individuals and John Does (identified by photographs) was before the court today.

“That motion was brought on account of breaches of the court injunction. Those named individuals were present and called before the court. Dawn Meats agreed to withdraw the attachment and committal motion today following an accommodation being reached.

The court granted liberty for Dawn to re-enter the attachment and committal motion if necessary.

“Dawn has not compromised in any way on its injunction proceedings. Those proceedings and the Court injunction across all of Dawn Meat’s plants remains with full force and effect.”

Commenting ahead of the talks on Monday, the farmer said the picket is going to stay in place until “we get the result that we want to get”.

“Every farmer is sticking to their guns. People are not backing down and that’s it.”

The farmer expressed optimism that the 30-month rule will be reviewed during the talks and noted that a recent article published on AgriLand  “rubbished the whole 30-month rule”.

Meanwhile, in Cavan last night, an agreement was reached between almost 300 beef farmer protesters and representatives of Liffey Meats at its Ballyjamesduff processing plant.

The deal includes a commitment that all legal proceedings taken by the meat processor will be “struck out“.

Meanwhile, the protesters have agreed to allow access for some containers at site, however, they will continue to maintain a “peaceful presence” at the Co. Cavan plant.

In the agreement, seen by AgriLand, the below seven points are outlined and signed off on by Liffey Meats:

Concluding, Fitzmaurice told AgriLand: “I told them straight that you’re not going to solve anything if you don’t go to the table and get it sorted.”