There will be checks on goods and on live animals in the event of a no-deal Brexit, Taoiseach Leo Varadkar has confirmed.

Speaking at the British Irish Chamber of Commerce last night, Thursday, September 5, the Taoiseach underlined what would happen in a no-deal scenario.

“There will be checks on goods and on live animals; and as far as possible these will take place in the ports, airports and at business level,” he said.

Some may need to take place near the border.

“We are working out the details of this with the European Commission, and will inform the public and businesses as soon as we know what the outcome will be.”

Earlier in his speech, the Taoiseach warned: “Given the political developments in the UK, there is a significant and growing risk of no-deal.

“We don’t want to see no deal and will continue our efforts to avoid one to the very end – but not at any cost. Unlike some, I see no upsides to no deal – and yes, I do fear it – but I’m prepared for it politically.”

He noted that, even if there is a deal, “we are going to enter several years of negotiations on a new free-trade agreement and a new economic and security partnership”.

Advertisement
The Taoiseach said that this will lead to “difficult debates and even more difficult decisions to be made” on a number of topics, including: tariffs; customs; quotas; product standards; and state aid, among others.

He added that such deals may make negotiations on the withdrawal agreement “seem simple”.

Meanwhile, Minister for Agriculture, Food and the Marine, Michael Creed, also commented on the Government’s preparations for a no-deal Brexit.

Speaking to AgriLand on Wednesday, September 4, at the official launch of the 2019 National Ploughing Championships, the minister said:

“Yesterday [Tuesday] in cabinet we had a detailed discussion around our own Brexit preparedness; the increased likelihood of a no-deal Brexit.

“We’ve significant investment made already in terms of infrastructure, IT systems, staffing, to deal with a no-deal Brexit; and obviously we’re engaged as well across Government and at EU level in terms of the supports that would be necessary for the industry should there be a crash-out.

“And the best-laid plans will not insulate us from the consequences of a no deal. But we are doing everything we possibly can in conjunction with stakeholders to be prepared as much as we can,” Minister Creed concluded. 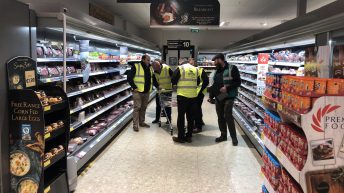