IFRG calls for ballot of farmers on CAP 2020 proposals

The Irish Family-Farm Rights Group (IFRG) has called for a ballot of farmers on the proposals for the Common Agricultural Policy (CAP) after 2020.

The group’s national chairman, Donnie Shine, claimed that this was because “certain farm representative associations” were arguing against changes to the CAP that would benefit the majority of farmers.

Shine echoed the comments by member of the European parliament (MEP) Luke ‘Ming’ Flanagan, who argued that the line taken by some farming organisations was not in the interests of farmers.

Certain Irish farmer representative associations and their no-change stance on CAP, if left unchallenged, will mean the big payment recipients will continue to take the payment entitlements due to the small payment recipients.

“Successive EU commissioners for agriculture have attempted to reform the CAP payments system to distribute payments more equitably, but these attempts have been repeatedly resisted by the Irish farmers’ representative establishment,” claimed Shine.

He also urged farmers to “bypass” representative bodies and go straight to their TDs or MEPs so their voices could be heard.

Shine also claimed that successive ministers of agriculture in Ireland failed in their duty to adequately represent farmers here, which, he said, results in the current discrepancy in CAP payments.

According to Shine, the misrepresentation of the Irish agricultural sector by farm groups and government departments has resulted in the “failure of the EU project for the 80% of Irish farmers now receiving only 20% of the EU farm fund divided up between them”.

Concluding, Shine called for the current system of distribution to be either repaired or scrapped.

“Either the current flawed Irish system of EU farm fund distribution among Irish farmers is repaired, so it is fair and equitable under CAP 2020, or it should be scrapped altogether so that ordinary, decent, hard-working farmers can compete with each other once again on a level playing field,” he argued. 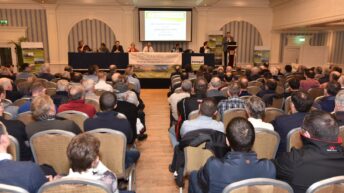