How did calves perform on Green Acres farms in 2020? 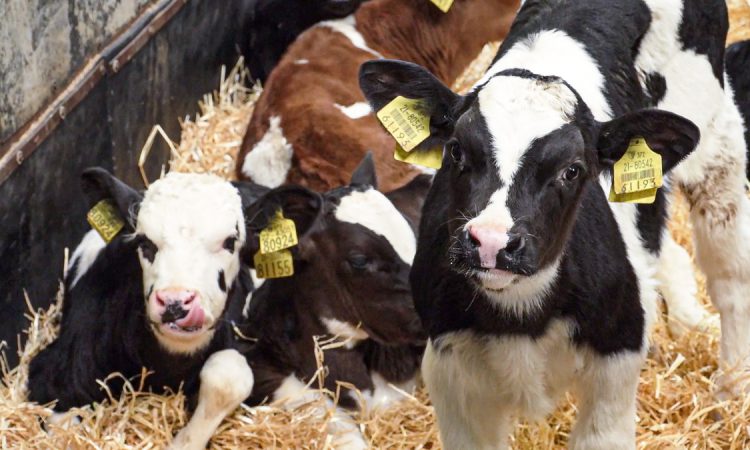 Monitoring the weight gain performance of young animals on calf-to-beef farms can be a useful source of information for farmers. It allows them to review and identify any underperforming animals that may require preferential treatment.

As part of the Teagasc Green Acres Calf-to-Beef Programme, all of the participating farmers are encouraged to regularly weigh their animals, when practically possible. The purpose being to record their average daily live weight gains (ADG).

As part of a review for 2020, AgriLand has been taking a look at how calves purchased in autumn 2019 and spring of 2020 performed on the farms within the programme over the past year.

The following weight data was gathered by the programme’s advisors, James Fitzgerald and Seán Cummins.

On the farms that purchase calves with Angus and Hereford breeding, the majority of these were born in the spring of 2020.

From the group of 172 early-maturing males, the average weight recorded at 243 days was 227kg, which results in an ADG of 0.77kg/day (accounting for a 40kg birth weight).

The highest ADG of 0.89/kg was noted on the farm of JP Hammersley as his calves weighed approximately 263kg at 251 days old.

As a whole, the females are on target with their weight gains as they achieved an ADG of 0.69kg (accounting for a birth weight of 35kg) over a 255-day period.

Ciaran Bartley’s calves recorded the highest ADG from this group of females, recording 0.83kg/day or 267kg at 279 days old, albeit his calves were approximately 20 days older than the rest of the farms at weighing.

The number of farms with continental-bred calves was limited to only three farmers within the programme. Belgian Blue was the most prevalent continental sire, followed by Limousin, Aubrac, Charolais and Simmental.

The male continental calves were averaging 221kg at 253 days old, which meant they reached an ADG of 0.72kg/day.

Continental-bred heifer calves amounted to 69 head in total and were weighed at an average age of 263 days old. They recorded an average weight of 213kg or 0.68kg/day.

Holstein Friesian bred males dominated the programme as there was a total of 105 with 739 autumn-born and spring-born calves, respectively.

2020 witnessed a rise in the number of Holstein-Friesian calves purchased by farmers within the programme. This was due to the relative value for money in calf price.

The autumn-born weanlings were weighed at a later age compared to the spring-born calves and reached an average of 360kg at 374 days old or an ADG of 0.86kg/day.

The large group of spring-born calves weighed an average of 254kg at 271 days old. This resulted in them having an ADG of 0.79kg/day.

From the list of farms, JP Hammersley and Jarlath Ruane recorded outlying ADGs of 0.90kg/day and 0.88kg/day, respectively. 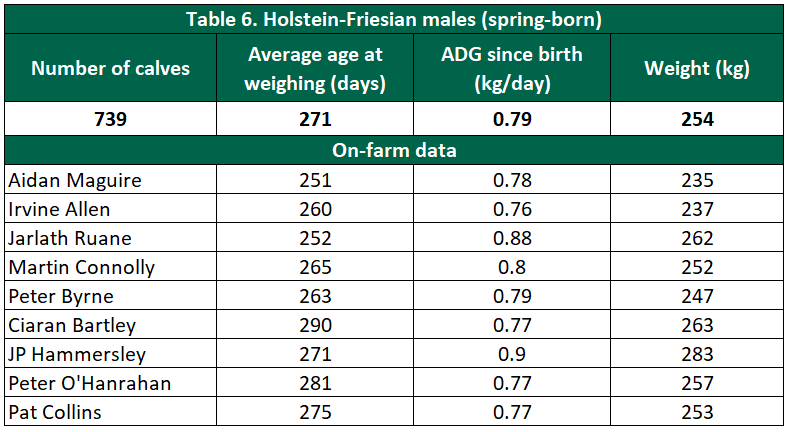 Comparing the overall calf performance this year to the calves weighed in 2019, there have been gains made across all breeds. It should be noted that there are variables that can influence these yearly comparisons in weight gains such as the calves’ ages at recording.

For 2020, the highest gains were witnessed among the continental males, as this group achieved an additional 31kg.

The second highest additional yearly weight gain of 24kg was noted in the group of Holstein Friesian bull spring-born calves.

Early-maturing males born in spring 2020 and Holstein Friesian bulls born in the autumn of 2019 both had an additional weight gain of 20kg, compared to the group of weanlings weighed during 2019.