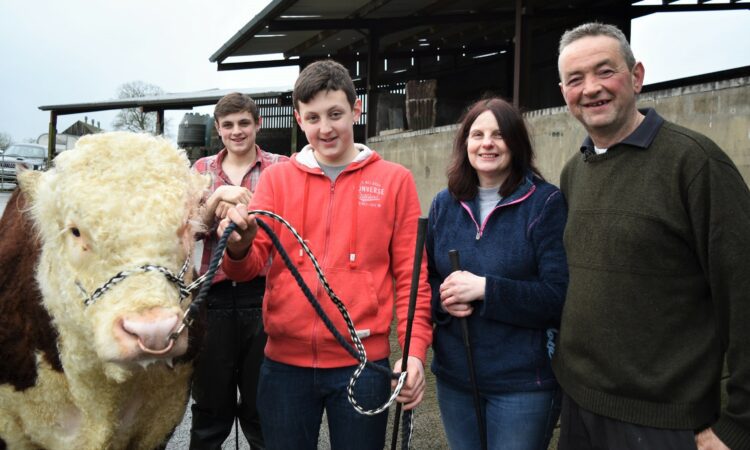 ‘Rare Breed – A Farming Year’ returns for a new series with new farms and families and some familiar faces on Thursday, January 17 at 8:30pm on UTV.

Taking viewers into the heart of the farming world in Northern Ireland, Rare Breed’s behind-the-scenes depiction of the annual farming cycle, and the ups and downs of farming life across Northern Ireland, has proved to be a much-loved hit with viewers.

Filmed in all weathers, this series follows 11 farmers and families from a variety of farms across Northern Ireland over a 12 month period.

We follow the producers of cattle, sheep, pigs, apples, eggs, trees and vegetables, and see how our local produce not only ends up on our tables but also how internationally successful it is, worth millions to the economy, providing employment for tens of thousands of people.

In the first episode, we meet The Wilson family from Co. Fermanagh (pictured top). They make a welcome return to the Rare Breed screen having been featured in the first ever series. They are getting bulls ready for sale, which involves a Fairy Liquid shampoo, and serious skill and patience with a camera. We also see how the boys mix studying and working on the farm, as they examine newborn lambs to ensure they are well enough to go outdoors.

We also meet Richard and Selina Beattie from Tyrone who too are in the middle of lambing season. They are kept busy by also running livestock markets.

Part-time farmers Gary Hanna and Iain Coleville breed pedigree sheep and cattle in the Newtownards area, and we see how they are managing careers as a lawyer and funeral director with their new found passion.

Moving away from livestock, the first episode also features the McKeever family from Portadown who are apple farmers. We see dad, Pat, and son, Peter, test the soil and prune the trees in preparation for growing season.

Finally, in Episode 1, we meet Joel Kerr from Dungannon, who gave up his career in IT to return to the family farm to breed shorthorn cattle.

We hear how he’s not put off by the weather. “If you stopped when it got cold, you wouldn’t get much done,” he chimes.

‘A firm favourite among viewers’

Terry Brennan, head of news and programmes at UTV, said: “Rare Breed – A Farming Year has become a firm favourite amongst UTV viewers who look forward to the return of the agricultural series each year in our New Year schedule.

“Rare Breed is unique in that it gives viewers an access-all-areas pass to the people behind one of the island’s biggest industries – on farms both big and small, and I’m sure the series will entertain, educate and delight in equal measure.”

Kelda Crawford-McCann, managing director of the company, said: “We are delighted with the continued popularity of Rare Breed.

The year we’ve spent filming with the farmers has been fascinating, with the 12 episodes encapsulating perfectly the highs and lows of the cycle of farming, be it livestock, fruit, vegetables, forestry, or eggs. It’s all there.