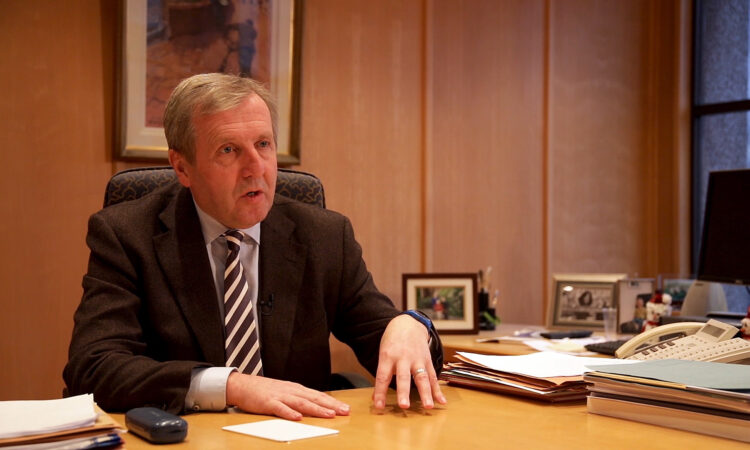 The Minister for Agriculture, Food and the Marine, Michael Creed, has said he does “not envisage” border infrastructure in the case of a hard Brexit, despite growing speculation of no-deal border infrastructures potentially being imposed if the UK crashes out of the EU next month.

Speaking earlier (January 23) on RTE’s Morning Ireland, the minister faced a hard line of questioning following yesterday’s statement from European Commission spokesman, Margaritis Schinas, who frankly stated that if there is a no-deal Brexit it would result in a “hard border” for Ireland.

At a press conference in Brussels the commission’s spokesman said: “If you’d like to push me and speculate on what might happen in a no-deal scenario in Ireland, I think it is pretty obvious: You will have a hard border.

“And our commitment to the Good Friday Agreement and everything we have been doing for years with our tools, instruments and programmes, would have to take inevitably into account this fact,” he stated.

This morning, when asked what steps are being taken to prepare for the introduction of a hard border, if the UK leaves without a withdrawal agreement on March 29, Minister Creed said that it is imperative that the focus remains on action being taken in Westminster.

You can dress the question up any way you like. We have made it imperative in our negotiation strategy from day one that we would not countenance a border infrastructure.

“The focus remains fully on Westminster and London because we have negotiated an agreement which deals with the border issue with the UK government.

“If the withdrawal agreement takes its current shape because of the self-imposed red lines that they have insisted upon.

“It is currently the situation that there are checks because the island of Ireland is treated as one biosecurity area in terms of checks on animal imports,” he said.

The minister said that it is not politically the case that there is “any fracturing of the consensus” among the EU-27 on how the UK should depart the EU bloc.

We do not envisage – under any circumstances – border infrastructure.

“This Government is not countenancing – in any circumstances – returning to a situation where we have hard border infrastructure,” he said.

The minister reiterated that the “solution” to concerns surrounding the border issue is outlined under the terms of the current EU/UK withdrawal agreement – which was overwhelmingly rejected by MPs in the House of Commons last week.

“If they change their self-imposed red lines, that offers the opportunity then to revisit the withdrawal agreement and the commission has clearly stated that.

We need to have a concluded definitive response from the UK parliament to the proposals to deal with their exit from the EU.

“It is not for us who have engineered a solution in negotiating with the British government. It is imperative that the Irish Government’s position is clearly understood in the context of a debate that is current and fluid in the UK parliament.

“We have a solution and we share the same position that the Northern Ireland Secretary of State shares in the context of there being no hard border in any circumstances,” the minister concluded.