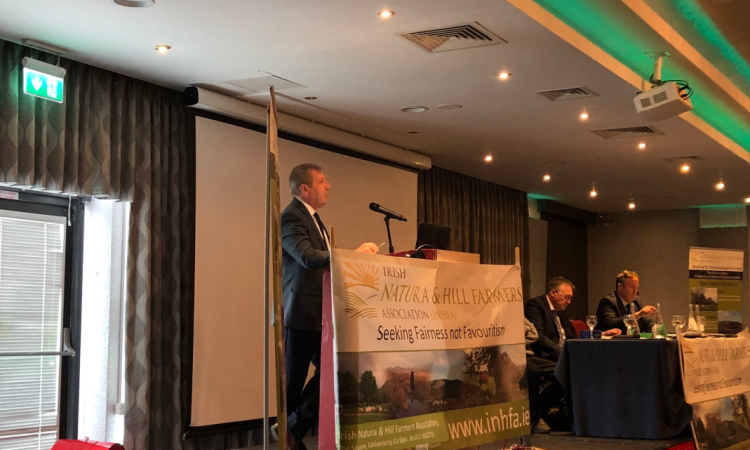 Minister Michael Creed speaking at the INHFA AGM in Sligo

Suckler farmers should be included in the allocation of the €100 million beef aid fund, according to Michael Creed, the Minister for Agriculture, Food and the Marine.

He also reiterated is previous statement that the scheme is “for nobody other than farmers”.

He was speaking at the annual general meeting (AGM) of the Irish Natura and Hill Farmers Association (INHFA), which was hosted at the Clayton Hotel in Sligo town this evening, Thursday, June 6.

Minister Creed stipulated a “condition” to this, namely that the Government was still awaiting the exact terms and conditions from the European Commission on how the funds can be allocated.

In a wide ranging address, the minister said that “details are being discussed”, and that he would “make information available as soon as possible”.

Minster Creed also confirmed that he would engage with stakeholder groups on how to distribute the fund.

It was in the context of the “prolonged and exceptional period of depressed prices” in the beef sector that the minister argued: “The future of CAP [Common Agriculture Policy] must take centre stage.”

He argued that a retention of the current CAP budget is “a key priority”, adding that a cut to that money would be “unacceptable to me and the Government”.

We are prepared to pay more into the EU budget, even as a net contributor. We’ve been building alliances [with other member states] with commitments to contribute more.

The minister outlined his view that consultation at the national level will be “really important”, and that this would “allow us to shape the CAP at a national level”.

On the issue of convergence of payments, the minister argued that “the journey should continue”; however, he warned against “absolutist positions”, saying “we need to be aware of unintended consequences”.

He added that his goal is “to keep as many people as possible in farming”. 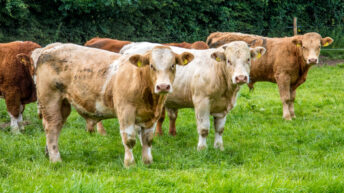