Look back: ‘You can start small. You don’t have to start big’

In this ‘look back’, we take a short journey into the past to October and the Macra Annual Conference. The Saturday of the conference featured farm walks and Tom Barry inspired a group of young tillage farmers to farm if that’s what they want to do – on a small or a big scale.

“You can start small. You don’t have to start big. You’re every bit as important as a small tillage farmer, as the fella who’s out there doing it on a large scale. You do what makes profit for yourself.”

Tom Barry farms in Killavullen, Co. Cork and last week he told his story to a group of young tillage farmers at the Macra Annual Conference.

It’s fair to say he got their attention. Standing in his farmyard, in which there is space to store 30,000t of grain, he explained how it didn’t happen overnight and gave some solid advice as they start on their way. 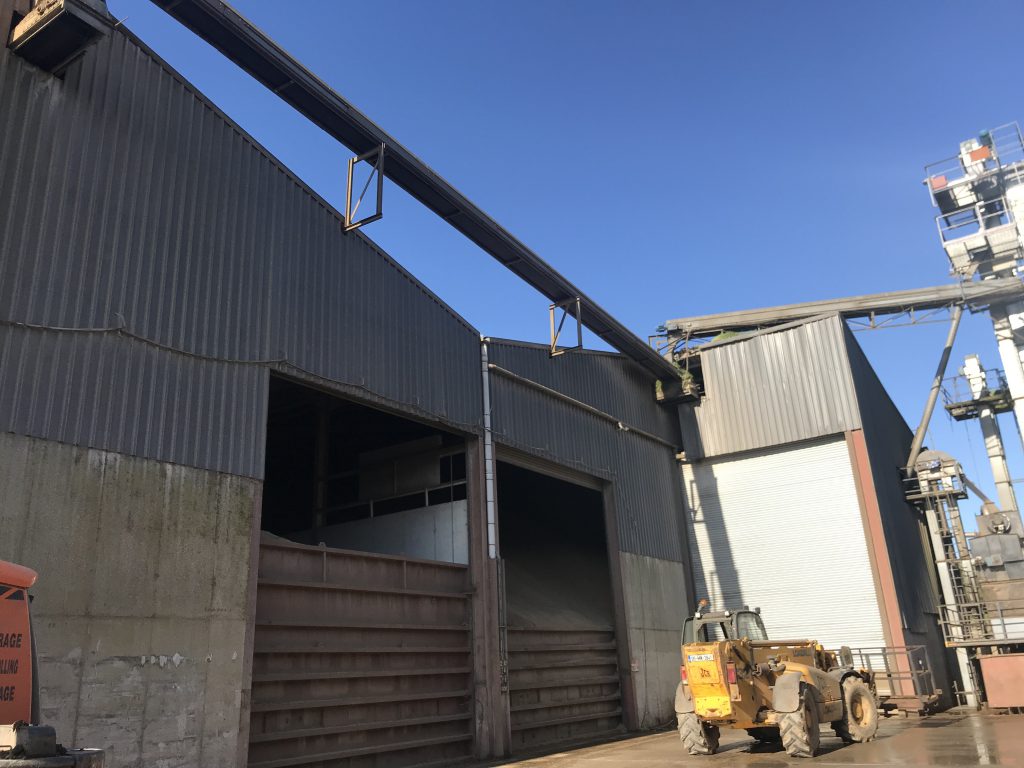 “We used to milk cows here and we got rid of them and it was the best decision I ever made in my life. We got paid to get rid of the cows, can you believe that?”

That was in 1991, but at the time Tom used this money wisely. He knew he needed another income aside from tillage farming and so he erected two storage units on the farm.

Having stored product for the sugar factory, the closure of the industry was hard on his business, but he built it back up and he now dries grain and has storage space for 30,000t.

Don’t need to be large scale

While the Co. Cork man now runs a tillage operation on 1,000ac, he didn’t get to that scale overnight. It has happened over almost 30 years and he was adamant that a young farmer can enter the sector on a small scale.

He added that there is nothing wrong with finding another skill that fits in with the farm that will provide more income. As he said himself, tillage farming lends itself to that.

He advised young farmers to make a plan, stick to the area they know and very importantly not to take on too much.

It’s all about building your business over years. It won’t happen immediately. 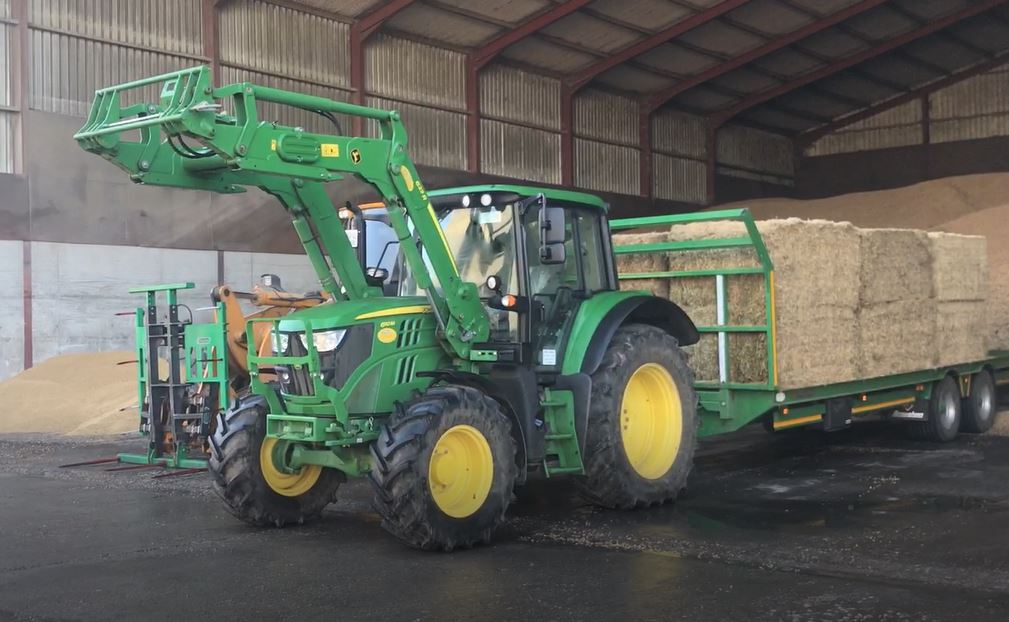 Looking around the yard now it’s a far cry from that Rabi harrow and a combine with an 8ft cut and no cab. Tom has a yard of many colours, but is not over capacity.

“You need a machine for everything,” he commented.

Every machine in the yard is working hard. The 10t Bredal fertiliser spreader will spread 200ac/day and the 6m Amazone sower was putting in 10ac/hour when the weather permitted over the last number of weeks. 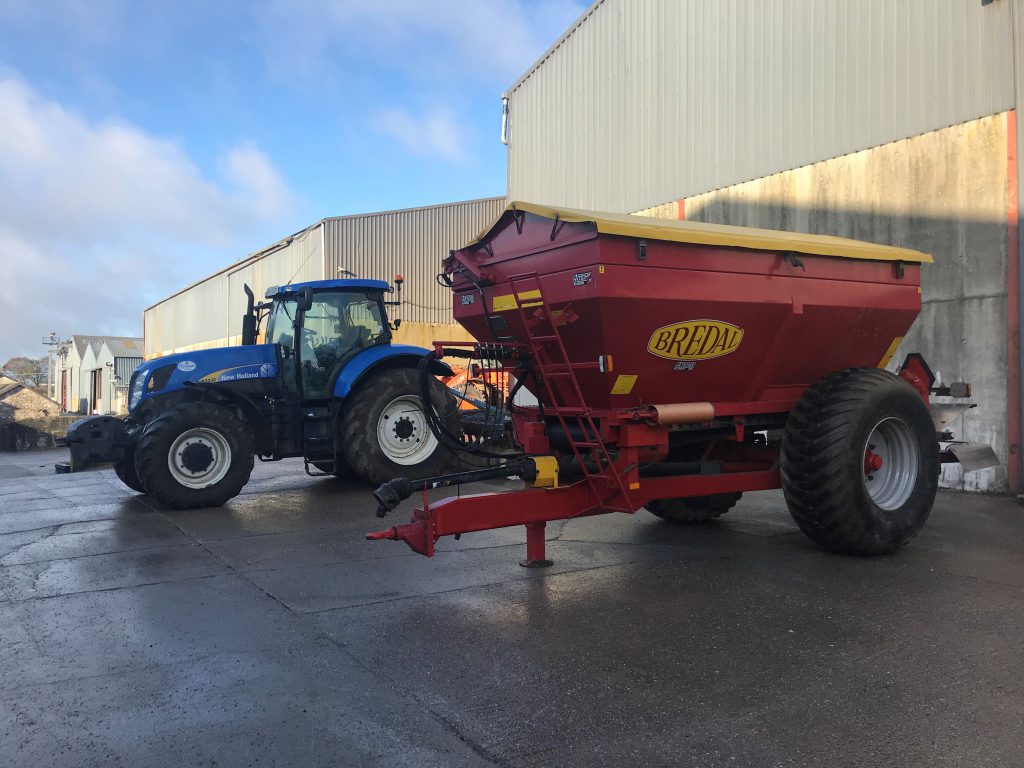 Back to the colours and he noted that he will buy a machine that he likes and is good value, regardless of colour. With no allegiance to any particular brand he feels he might get a better deal.

Before coming home to farm Tom had completed a PhD in biochemistry and this, no doubt, influences his soil management on the farm.

It also might have something to do with the two million gallons of pig slurry he spreads on his crops.

Advertisement
From late-January into March, Tom applies pig slurry to his winter crops and is convinced this is playing a huge role in achieving 4.5t/ac of winter barley.

He noted that the piggeries in his area are extremely professional. They need the land to spread it on and an agreement has been reached between both parties. Storage facilities have been built on farm and at certain times of the year the piggeries will even spread the slurry themselves. 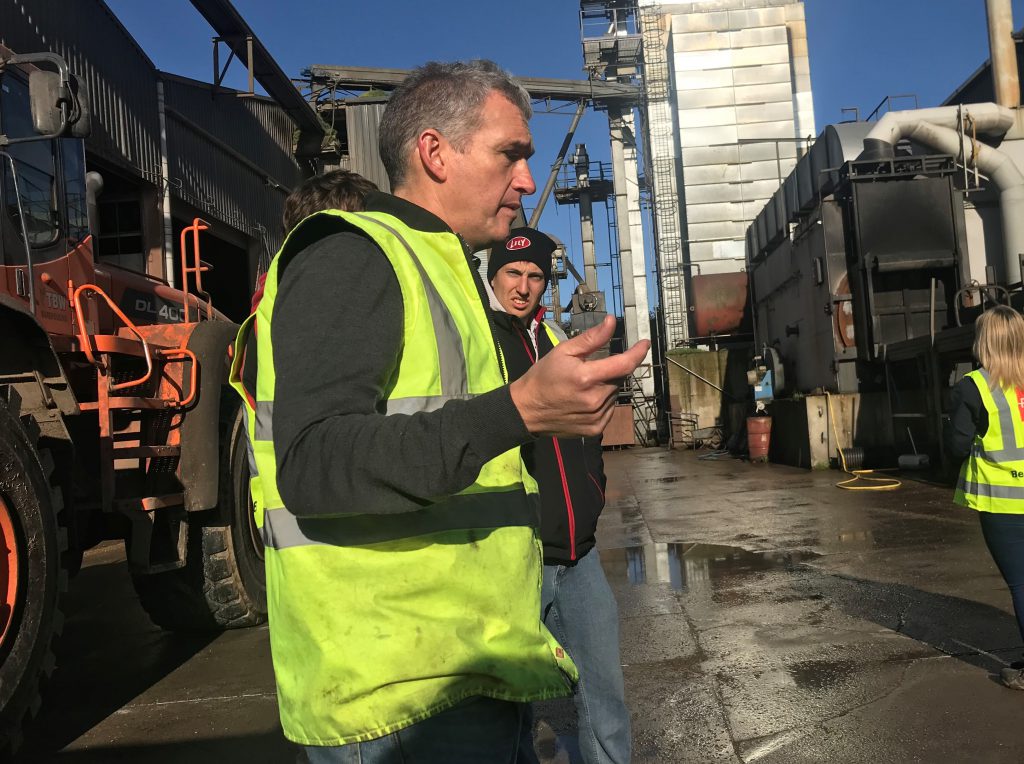 Commenting on the first time he spread pig slurry on growing crops, he stated: “It absolutely turned the crops inside out. You could see where the tanker stopped or overlapped.

“The pick up of nitrogen (N) in February was outstanding, so from then on we regularly spread all our winter barley ground with pig slurry – from late January into March.”

He is a firm believer in looking after his soil and believes soil health plays a key role in producing healthy plants as more chemicals leave the shelves.

Soil science is so critical. People in the past knew all about soil science. They knew the potential in their land. We have all the soil samples now, but we’re still not understanding what’s going on.

“The more we’re increasing fertility and the more we’re rotating we have a very strong, healthy plant. If we’re preventative rather than reactive in our sprays, with what we have left, I think we’ll be okay.”

Some of Tom’s land is on long-term lease, but he is not paying any outrageous prices. This is most likely because he focuses on soil health on all ground that he is farming. He keeps the landowners involved in what’s going on and has built up relationships with the landowners.

However, he sees a huge flaw in land leasing and the fact that a landowner cannot avail of tax relief if renting to their son or daughter. 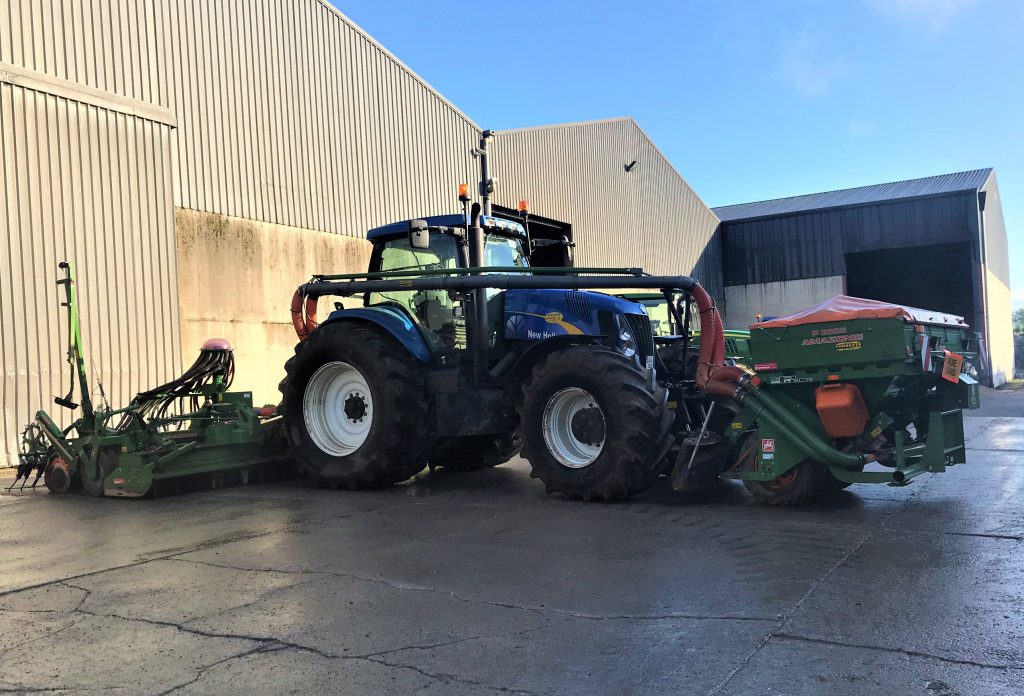 He continues on to describe how things have changed so much since he started out. He was given an installation aid payment of £15,000, REPS provided a further £10,000 into the business and his parents were able to avail of the retirement scheme. This is very different to what’s available now.

Young tillage farmers need to speak out. They need to lobby and fight for supports.

“If you don’t speak out for yourselves nobody is going to do it. You need to be listened to. It’s very important. The whole rural fabric of our communities is based on the likes of yourselves staying here.

“There’s enough money coming into the pot in Ireland to leave all of you with a proper income, with enough money to invest back into your business and have a good standard of living, but you need to fight for it,” Tom stated adamantly.

Some of the schemes and grants at present clearly frustrate Tom. As he spoke to the group a “massive pizza oven” as he terms it sits behind him, but needless to say it’s not for pizza. There are just three of these types of burners on tillage farms around the country.

The burner fits an 8X4X4 bale of straw. That bale replaces 300L of diesel in his grain drier and dries 30t of grain. However, there’s no grant aid for it. Under the Targeted Agriculture Modernisation Scheme (TAMS) grant at the minute funding is available for a diesel drier.

He adds how coconut shells and other forms of biomass are imported into this country by the boat load. Using straw would first of all save on emissions, but also provide a consistent price for straw and therefore a consistent income for young farmers. 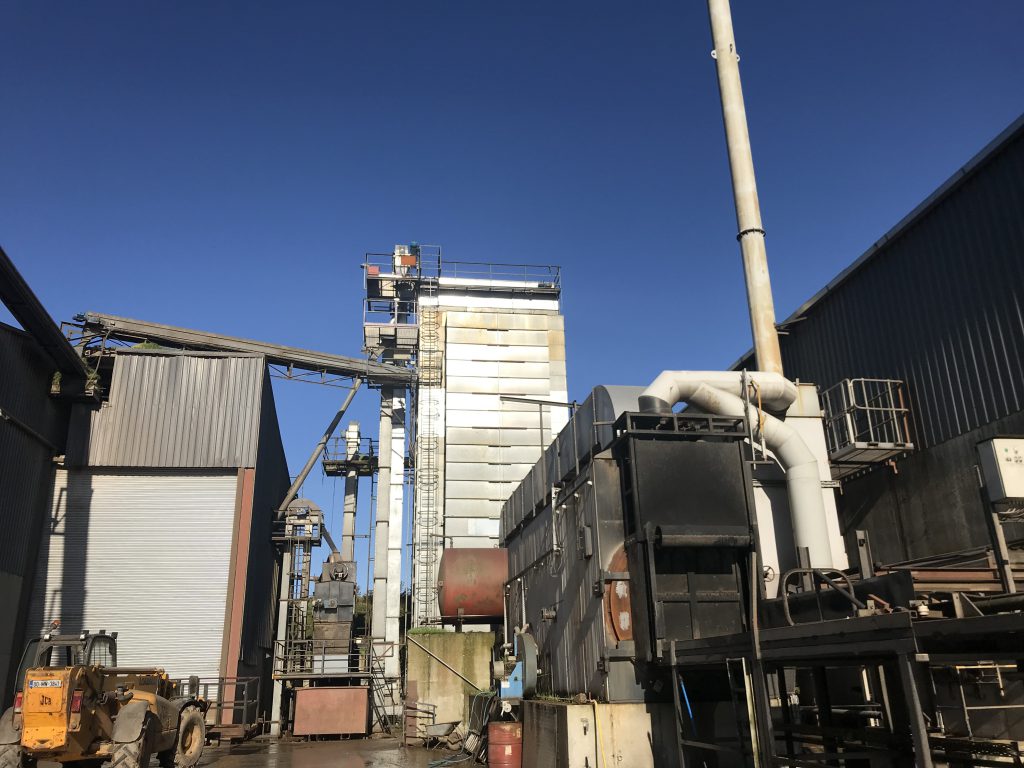 An 8X4X4 bale is used to create heat and dry grain

“This is your livelihoods. If you can get €150/t for your straw, on top of your grain price, stable for 10 years plus, you have a livelihood. It drives me crazy when people talk about carbon tax. Put money into projects.”

Advice for someone starting out in tillage

Tom had some sensible advice for the young farmers in front of him, who were clearly impressed by what he has achieved in his farming business.

Look at how you can get into it. What have you got? What gear have you? Can you share with some other farmer? Has he got a plough? Have you got a drill? Can you work together?

Tom added that he shared a combine for years before buying one of his own.

“Start off and share your gear, but do it with like-minded people. Start honorably and finish honorably,” he concluded.