Despite the poor weather conditions over the last week, there is a strong demand for quality continental heifers, according to mart managers across the country.

However, plainer cattle remain difficult to sell with these lots falling by as much as €10-15/head in some venues. 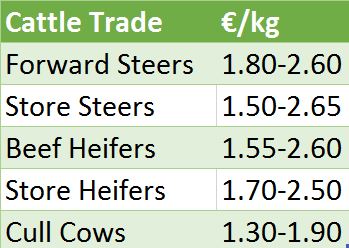 The south-east of the country had the best weather over the weekend, but there was also a very strong cattle trade in Carnew Mart on Saturday, according to the Mart Manager David Quinn.

Forward steers in Carnew Mart remained in exceptional demand and these lots traded at €750-900 over while the lighter store classes made €550-850 over and Friesian steers sold for €450-850 over, he said.

The trade held up well despite the poor weather in Balla Mart on Saturday, according to the Mart Manager Michael Murphy, where breeding heifers traded at exceptional prices.

Like previous weeks, the plainer type steers proved harder to sell while the nice continental stores made excellent prices. The hammer fell on these lots from €1.24-3.11/kg or €500-760 over.

The Mart Manager said that there was great demand for heavy steers with prices also holding similar to last week’s levels at €1.55-2.60/kg.

He added that there was a smaller number of heifers on offer with 200 passing through the ring with the store lots trading at €1.89-2.87/kg.

Heavy heifers had improved on last year’s prices, he added, with some heifers suitable for breeding making €1,095 over while generally these lots made €1.65-2.92/kg.

There was a great trade for fleshed heavy continental cows on Saturday, he added, and these lots made €1.13-2.04/kg.

There was a good number of cattle on offer in Mountbellew Mart on Friday with good prices achieved for the steers and heifers on offer, according to the Mart Manager Marianne Higgins.

She added that there was also a firm trade for all the weanlings that passed through the ring with bulls trading at €2.57-2.59 while the hammer fell on the weanling heifers at €2.55-3.19/kg.

Plainer cattle were a little easier in Kilkenny Mart on Thursday with some lots back by €10-15/head on previous weeks, according to the Mart Manager Michael Lynch.

There was a large entry of cattle in Mayo Sligo Mart on Tuesday, according to the Mart Manager Billy Loftus and the trade has slipped especially for the lesser type cattle on offer.

According to Loftus, most agents and farmers have put this down to the difficulty getting overweight steers and cows killed in the factories.

There was also a good show of store heifers on offer, but he added that these lots had dropped by €20-40/head in recent weeks and these lots sold for €2.15-2.60/kg.