The cattle trade continues to remain mixed with good demand reported for the better quality steers and heifers on offer.

According to the country’s mart managers, these better quality lots are driving the trade at the minute as the plainer lots continue to remain difficult to sell. This is similar to previous weeks.

The cull cow market also remains difficult in some venues as the factories continue to tighten the prices paid for these lots with the vast majority trading at €0.86-1.80/kg. 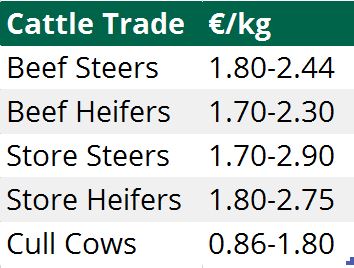 The cattle trade was a small bit easier in Mohill Mart on Saturday, according to the Mart Manager Steven Hannon.

According to Hannon, the quality of the cattle coming forward has deteriorated on previous weeks which is having a negative impact on the trade.

The weanling trade has also suffered in recent weeks as both the number of exporters and farmers bidding for these lots have dropped and, as a result, these lots generally made €2.80/kg.

However, he added that dry cows had improved with these lots generally making €2/kg.

There were 680 cattle on offer in Kilkenny Mart on Thursday with the trade holding steady for quality lots, according to the Mart Manager Michael Lynch.

Lynch added that there were more customers for the better quality stock on offer with forward steers trading from €1.60-2.60/kg while heifers made €1.80-2.60/kg.

However, the number of cull cows on offer remains smaller than previous weeks but trade for these lots remains tough with the hammer falling on the dairy types at €0.80-1.75/kg and beef at €1.20-1.75/kg.

There was little change in the cattle trade in Ennis Mart on Thursday, according to the Assistant Mart Manager Pat Doyle.

According to Doyle, quality store cattle remained a good trade while the plainer lots were more difficult to sell.

He also added that there was very little improvement in the cull cow trade with these lots making €1.26-1.80/kg, he said.

There was a mixed trade in Tullamore Mart on Thursday last, according to the Mart Manager Antoinette Daly.

According to Daly, the trade for heifers remained good but the demand for steers has slipped slightly on previous weeks.

Furthermore, she added that heifers met with good buyer demand with the hammer falling on the store lots from €2.34-2.68/kg while the forward beef classes made €1.87-2.33/kg.

The Mart Manager added that the number of cull cows coming forward had increased as the factories continue to cut these lots, and these lots made €1.45-1.89/kg.