Despite a weekly beef kill of 32,000 head and the week-on-week kill increasing by 1%, beef prices have remained relatively stable this week, according to procurement managers.

There has been no major change in the prices quotes for prime cattle with the majority of processors maintaining prices similar to last week’s levels.

According to procurement managers, heifers are currently making 400c/kg on the grid while farmers are being offered 385-390c/kg for steers.

Furthermore, the cull trade also seems to have settled, with the majority of processors offering 320-330c/kg for R grade cows.

There has also been little movement in the market for the O and P grade dairy types with beef plants offering 290-300c/kg and 280-290c/kg for these dairy types, according to procurement managers. 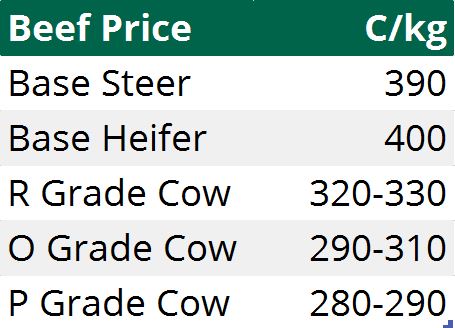 The trade for Irish beef across the key export markets has been reported as slow, according to Bord Bia.

Cattle prices in the Britain remain relatively stable with the average R4L steer making the equivalent of 508c/kg deadweight.

According to Bord Bia, the trade in Britain has eased particularly for striploin and ribs while demand was best for diced beef and round cuts.

Bord Bia also says that the demand for beef in France has also eased, particularly in the food service sector as fewer French people are eating out.

The Italian trade was also reported as slow, but it is hoped that wholesale promotions will help boost the market as the festive season approach, it says.

The cumulative beef kill at beef processors last week was back 5% on the corresponding period last year, figures from the Department of Agriculture show.

Total heifer throughput at the factories is back 4% on the corresponding week last year with total throughput this year standing at 373,376.

Throughput of young bulls to export plants is back 23% on the corresponding period in 2014. The cumulative young bull kill stands at 134,063 head.