The inventor of the Calving Assist – a device to aid dairy farmers in helping cows to calve – has had a whirlwind few days since unveiling his invention to the world.

Jim Ryan, a dairy farmer from Cashel, Co. Tipperary, came up with the idea in response to back trouble he had which caused him issues when calving down cows.

After thinking about this, he developed the Calving Assist – a device similar to a belt to help farmers to pull calves that are having difficult births.

Speaking to AgriLand, Jim explained how, after putting up a YouTube video – with the help of his brother – showcasing his device on Sunday (January 17), momentum has built resulting in him reaching a deal with Farm Relief Services (FRS) Cahir to put the Calving Assist into production – and just in time for many Irish farmers getting ready for a busy calving season. 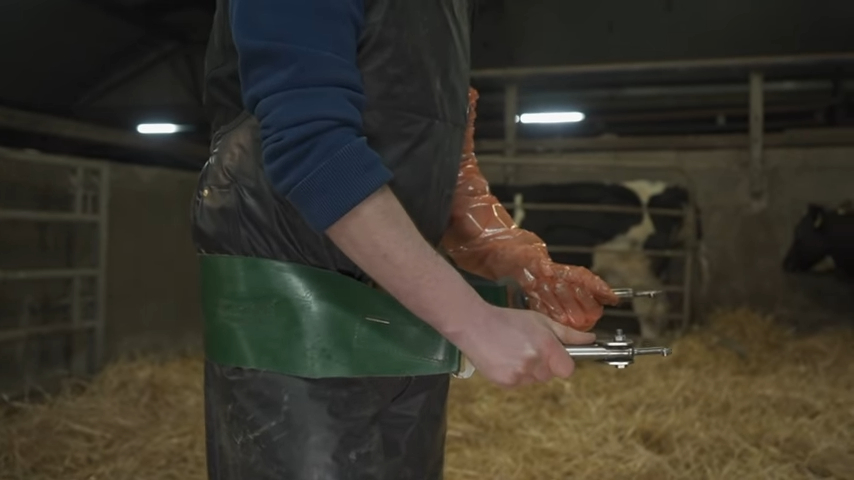 “I was chatting to Martin Burke, who runs the FRS there, he’s a personal friend of the family’s. I’m delighted that they have taken it on because they’re the right format.

There are orders in from all over Europe – England, Germany, France – not many, but all the same it’s mad. I only put the video up on Sunday.

On the Calving Assist itself, Jim said: “It’s simple but it allows you to put your body in a safer position. 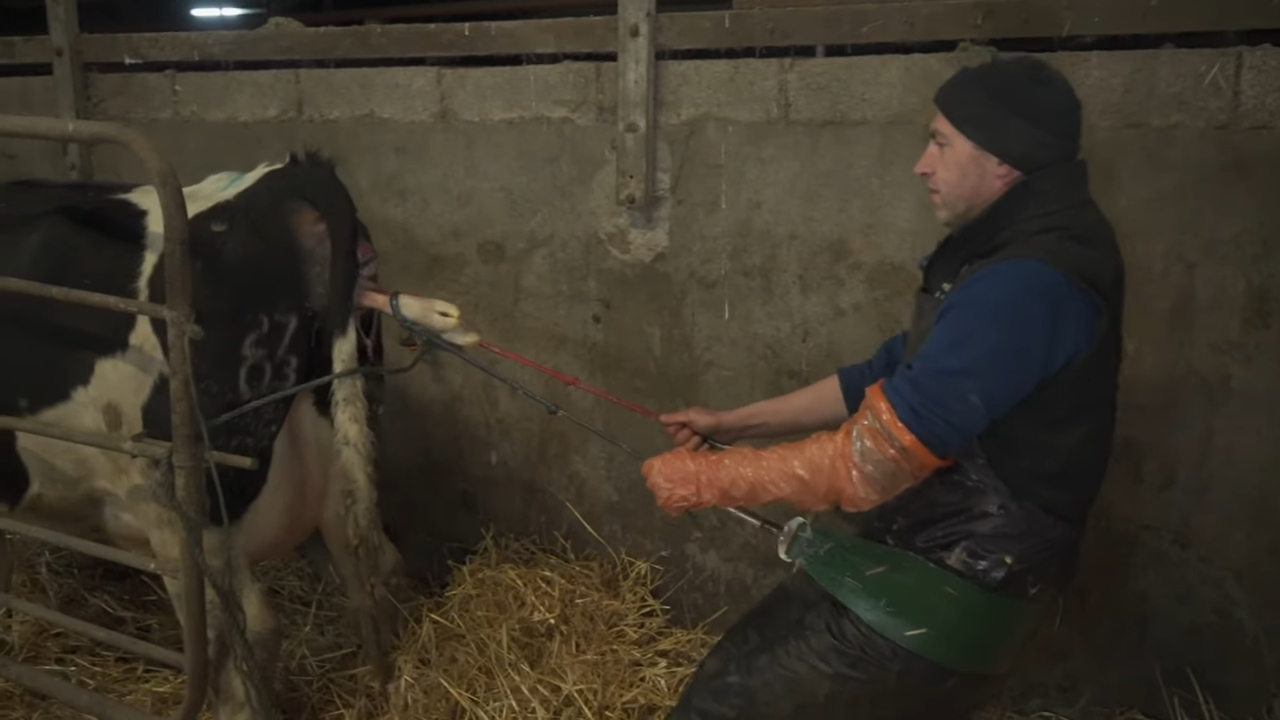 “While there are suckler lads interested too, it’s mainly for the dairy game, for calves you don’t need the bother of going for the calving jack or putting on the jack; ones that just need an assist.

“If you think of the traditional power you had pulling from the shoulders, with this thing I’d say you’re doubling your strength. It’s all about [using power from] the legs.

“I’m delighted the FRS took it on; a couple of lads were ringing me saying ‘you should have said nothing this spring and gone off to China to get 1,000 of them made’ – but I didn’t do it for the money.

If I could help a few lads, that’s the main thing. It wasn’t for the money. If you helped 100 lads with back trouble, wouldn’t it be worth it.

“When I get up to the pearly gates and I meet St. Peter, if he tells me ‘that yoke you made helped a lot of lads’ I might be better off!”

Time was also an issue for Jim; his wife Triona is a nurse working in ICU wards and, with three small children aged four and under, the idea of setting up a separate company was far from his mind.

“I’m good friends with a physio; he was saying, with the amount of lads he had coming into him every year who hurt themselves pulling out calves, you’d be shocked.”

In the case of the Calving Assist, the saying “necessity is the mother of invention” comes to mind.

“I had more epidurals and nerve blocks; in the finish I went up to Dublin and I got ozone gas injected into one of the disks; and in fairness that settled it down.

“Slowly then I rebuilt the strength around it but not to the extent that I used to have. That kind of strength that I had to pull out a calf when you had to pull one out quick, that strength was gone. If I calved one, I’d be in pain for three or four days; I wouldn’t sleep that night with pain.

This time last year, I pulled out a small calf and gave the back a twinge. That previous day I was in Cashel and saw a fellow up a telephone pole; I was looking at the harness he had.

“So, that night, I thought about it and set out how I’d do it. I got a girth off a saddle and I had a new set of white ropes; I tied a rope on to each end of it and I whipped out every calf we had last year.

“That worked away the finest but there was no release to it so it was too dangerous. Also the girth on a hard pull was too severe. 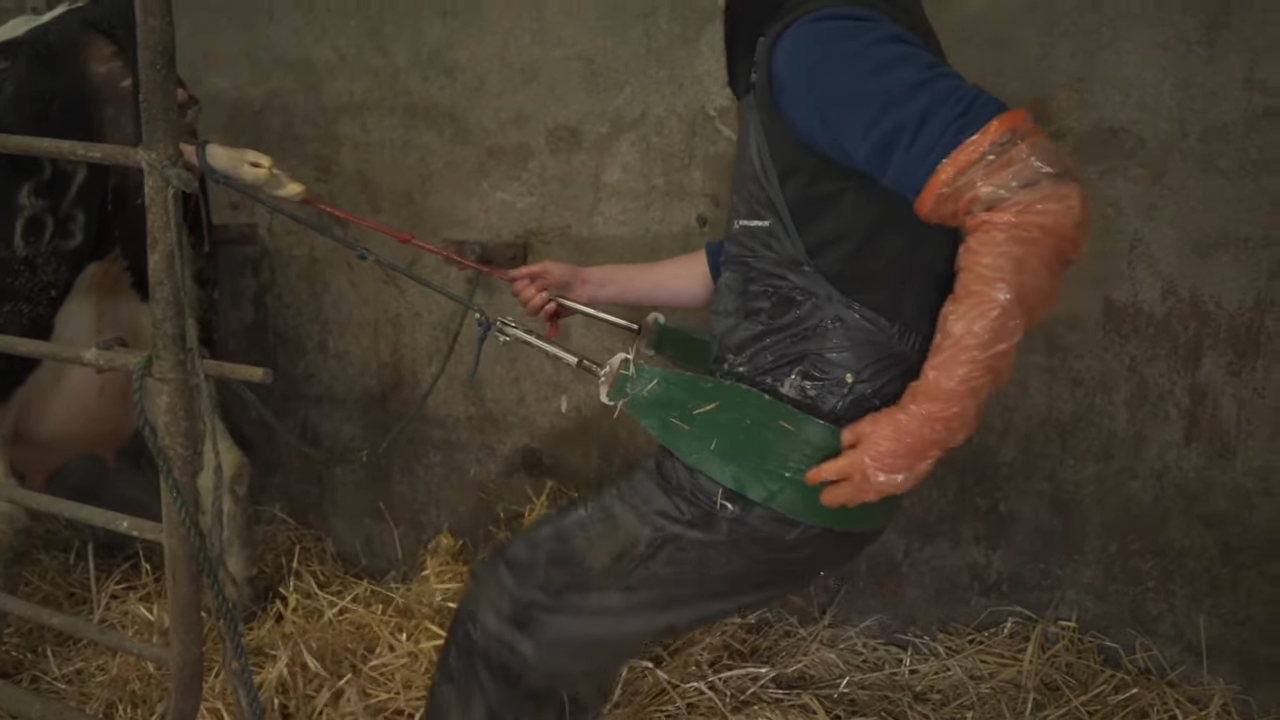 “So then, this new material I have is wider and the weight is evenly applied around the glute area so there’s no sore feeling after you use it. That was the original idea I had.

“I used that last year and then I gave the summer fooling trying to perfect it. I eventually got it the way it is now. It was actually my father Dick who helped then.

I knew I needed a release mechanism and he came up with that idea. When you’ve a bit of madness in the family anything can happen!

Moving back to this week, Jim explained that, under the deal reached with FRS Cahir, the Calving Assist is being produced in Ireland.

“It’ll be a couple of weeks with Covid-19 and everything but they’re actively making them this morning. They took away my one. Hopefully in the next two or three weeks they’ll have a batch out.”

In terms of pricing, the Calving Assist will cost €100 plus VAT.

On this, Jim explained: “The way we’re making it, the release mechanism is all made out of stainless steel; that will never break.

“The people we’re getting the harness from are telling me it’ll never break. People might say €100 is steep – but you’ll only have to buy one.”

“Stainless steel is expensive to make. I had wicked bother getting it made when I wanted to make it out of stainless because the welders are so specialized. But the strength is in it and it’s light.

“Farmers know the value of stainless steel; it’ll be used for January, February and March and then thrown up in the shed until this time next year – so you don’t want to be coming back to a tool that’s rusted. It needs to be durable.”