Beef trade: No change in quotes as supplies increase

There has been no movement in the prices beef factories are offering for steers and heifers this week. Many have opted to maintain quotes at last week’s levels.

For the most part, factories are offering 375c/kg for steers and 385c/kg for heifers; these quotes exclude Quality Assurance (QA) bonus payments.

Looking at the cow trade, it must be noted that there is a variation in the prices being quoted to farmers. This depends on the location and demand of individual processing plants.

Most beef cattle buyers are starting negotiations with farmers at 300c/kg for R-grade cows and 280-290c/kg for O-grade types. Looking at cows falling into the P-grade category, these animals are selling at 260-270c/kg.

Bulls still remain problematic in some plants. This week, factory agents are quoting 330-340c/kg for O-grade bulls, while R-grades are moving for 360c/kg; procurement managers are quoting 370c/kg for U-grading bulls and maybe 5c/kg higher in some cases.

Again, weight restrictions are causing some farmers problems when it comes to marketing their bulls.

The total number of cattle slaughtered in Ireland during the week ending February 10 reached 38,570 head – an increase of 870 head.

Beef processors have continued to work their way through the backlog of young bulls and this can be seen in the latest figures released by the Department of Agriculture, Food and the Marine. 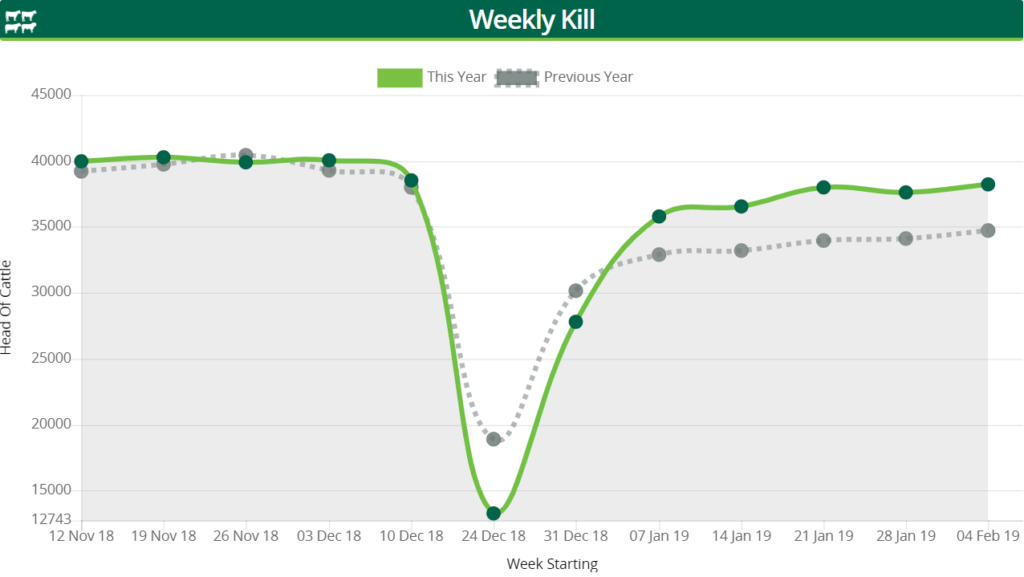 Some 6,447 young bulls were processed during the week ending February 10 – an increase of 20 head. This is also evident in the aged bull category. The number of aged bulls slaughtered jumped by 130 head to 523 head suggesting that some young bulls may have gone over age.

The majority of the overall increase was driven by the jump in bullock slaughterings; the number of steers killed during that week amounted to 11,773 head – a 514 head increase.

Looking at the yearly kill, just over 214,600 head of cattle have been slaughtered in Ireland so far this year. This is running just shy of 15,000 head when compared to the same period in 2018.

All categories have witnessed an increase in slaughterings with the exception of aged bulls.