Gardai have apprehended suspects and recovered a trailer which was stolen from a farmyard in Co. Waterford in recent days.

The trailer was successfully tracked down to the neighbouring county of Wexford, making two arrests in the process.

Taking to social media, a representative from An Garda Siochana provided a photograph of the recovered implement, with comments on the matter, and advice for the public in crime prevention.

“This trailer was stolen last week from a farmyard in Listerolin Mullinavat,” the statement said.

“Gardai in Mooncoin later traced the trailer to Co. Wexford a few hours later and two suspects were arrested and detained in Thomastown Garda Station and trailer recovered.

Meanwhile, in Co. Tipperary, a property marking machine is to be used as part of a scheme to deter thieves.

Incorporated into an initiative being run by Tipperary County Council, the device will assist victims of crime to recover stolen property, according to local radio station TippFM.

The machine, apparently worth about €6,000, physically marks property with the Eircode of the owners, thus making them identifiable in the case of theft and recovery.

Speaking on TippFM, members of the county council highlighted the benefits of marking property.

Cllr Imelda Goldsboro said: “It would reduce insurance premiums; it will act as a deterrent.”

Cllr Andy Moloney also spoke, adding: “Things will be stolen but it will be easier to recover them.

“The Gardai have a number of pieces of equipment that they have no owners for, so at least if they’re numbered it will be easier to find them.” 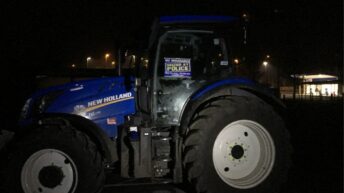