In this week’s beef focus, we visit the farm of Ben and Elaine Ryall – a husband-and-wife team – where pedigree cattle have been bred since 1956.

The Fellfort Irish Angus herd can be seen dotted across a 50ha grazing platform in Watergrasshill, Co. Cork.

The herd consists of 80 pedigree cows, their offspring and three stock bulls. Every year, approximately 40 high health status bulls are sold to local dairy farmers in the region. Approximately 20% of the herd is replaced every year and surplus heifers are sold in Ireland and exported across Europe.

The Fellfort herd has such a reputation that a lot of the customers each year are repeat buyers.

Although surrounded by predominately dairy farms as far as the eye can see, pedigree breeding has always been a part of Ben’s life. His father Jack bred Shorthorn, Angus and Hereford cattle; commercial weanlings were also purchased and brought to beef. However, Ben and Elaine focus solely on breeding pedigree Angus cattle nowadays. 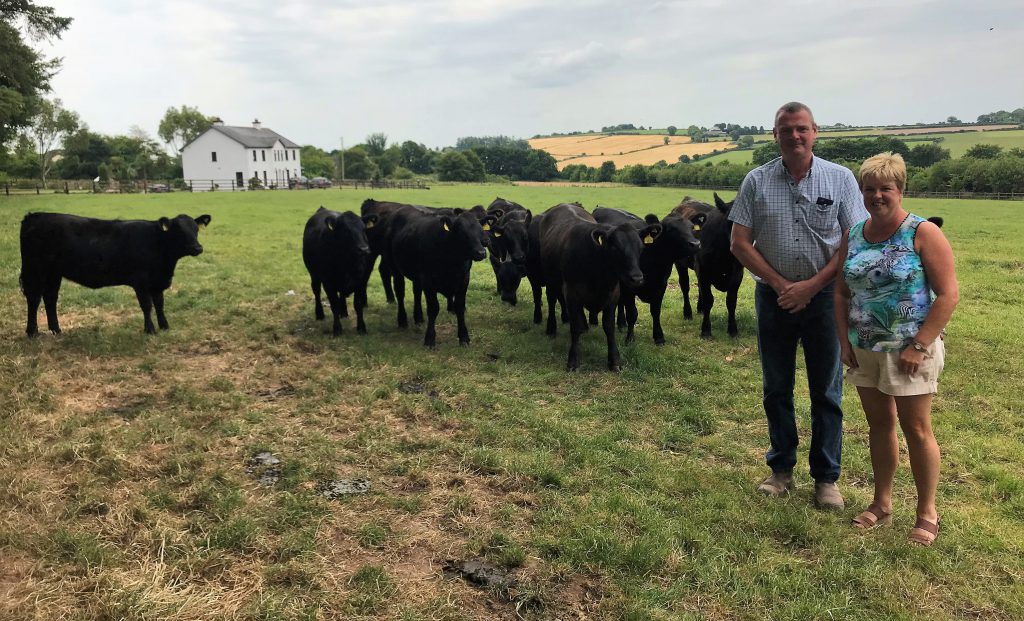 This decision – which was made in 2006 – was based on the idea of operating a closed, high-health herd; the Ryalls also seized the opportunity to supply high-quality, easy-calving bulls to dairy farmers in the area and across the island.

“We knew there was more money to be made from focusing on this enterprise; we also wanted a closed herd and we love working with the pedigree cattle,” Ben explained.

No stone is left unturned when it comes to herd health and it is an area that Ben and Elaine are extremely conscious of. No animals – apart from the stock bulls – are purchased off-farm; these stock bulls carry out the majority of the breeding. However, some AI is also used.

Strict protocols are adhered to and Elaine explained that any animal leaving the yard has its “armour” on and is ready for work. 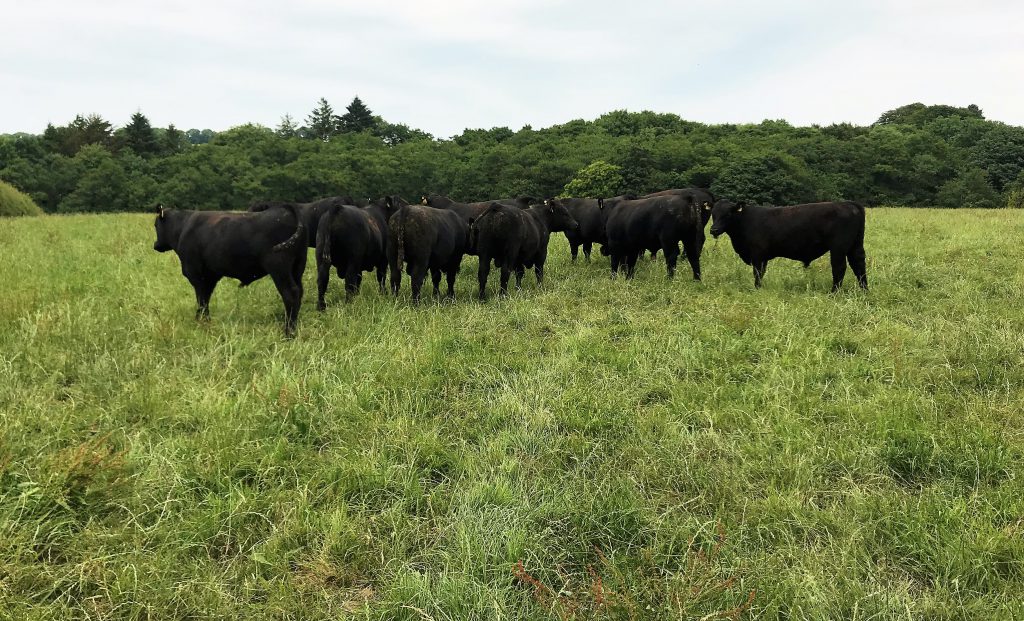 “We sell fit bulls, not fat bulls. Some bulls are totally overfed, leading to problems down the line. These animals won’t last in a herd,” she said.

Bulls sold are tested for IBR and vaccinated for BVD, IBR and leptospirosis. The dams are also tested for Johne’s disease. The bulls also undergo an ‘NCT’, where fertility is tested before sale.

“It costs us money to do all of those things, but we are getting it back because we have no problem selling bulls. We spend money to save and make money,” Ben added.

Two of the stock bulls presently on the farm were purchased from the Drumcrow herd ran by Frank McKiernan. These are Drumcrow Live Wire and Drumcrow Montana; the third bull – Carrigroe Noel – won the Aldi/ABP Championship last year. 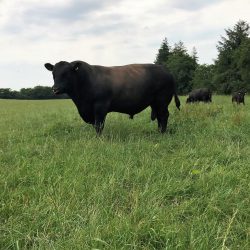 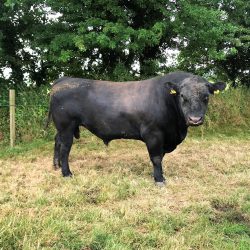 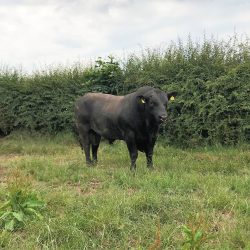 In the past, the Fellfort herd won championships and inter-breed championships at summer shows, but no cattle have been shown in the last five years. However, Ben and Elaine spend a lot of their spare time judging cattle at various shows across the country.

The Ryalls are on the ball when it comes to data recording within the herd; this is something that Ben finds to be an extremely useful tool.

All calves have a calving difficulty score and birth weight, as well as other information such as calf size and calf vigour. 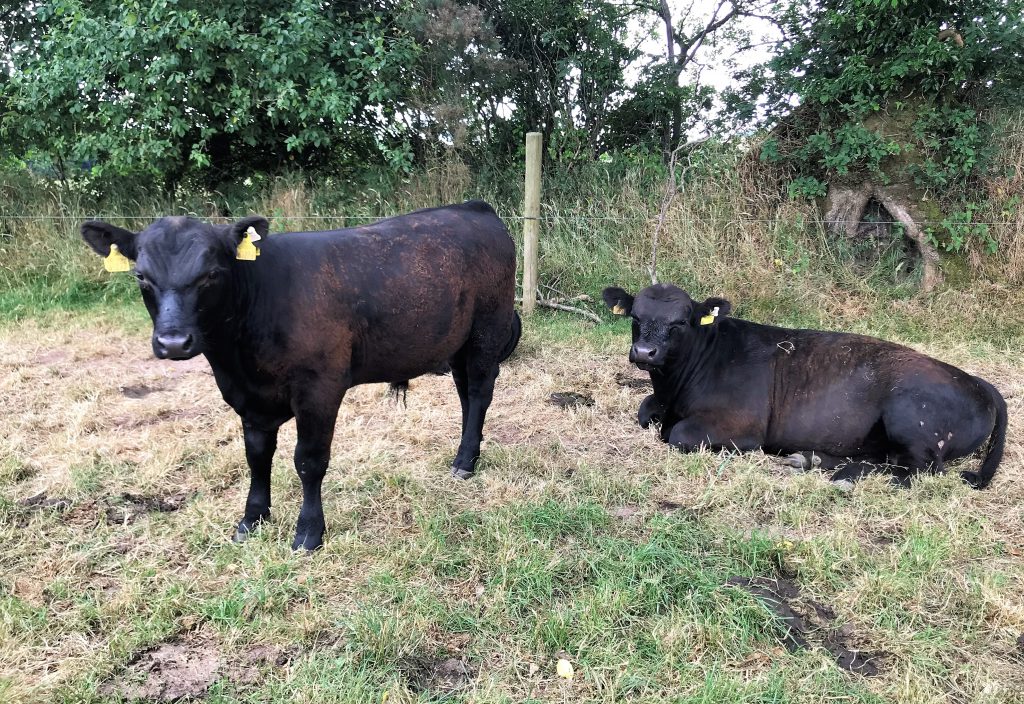 All service dates for the stock bulls and AI serves are recorded to provide vital information on gestation lengths of sires and dams.

The average calving interval on the farm stands at 350 days; this is well below the national average of 401 days. All heifers on the farm calve down at 24 months and any animals which fail to go in calf are culled.

“We have no problem culling cows; if the breeding strategy is correct, the heifers should be better than the cow and good-quality cull cows make good money inside in the factory.

“If we keep cows that are not in calf, we are keeping free loaders. We scan cows as soon as we can after the breeding season and anything not in calf is gone, once the previous calf is reared.

“You can’t look at a cow and say she’s a great cow if she fails to go in calf; no matter how good she is, she’s a bad cow if she’s not in calf,” Ben explained. 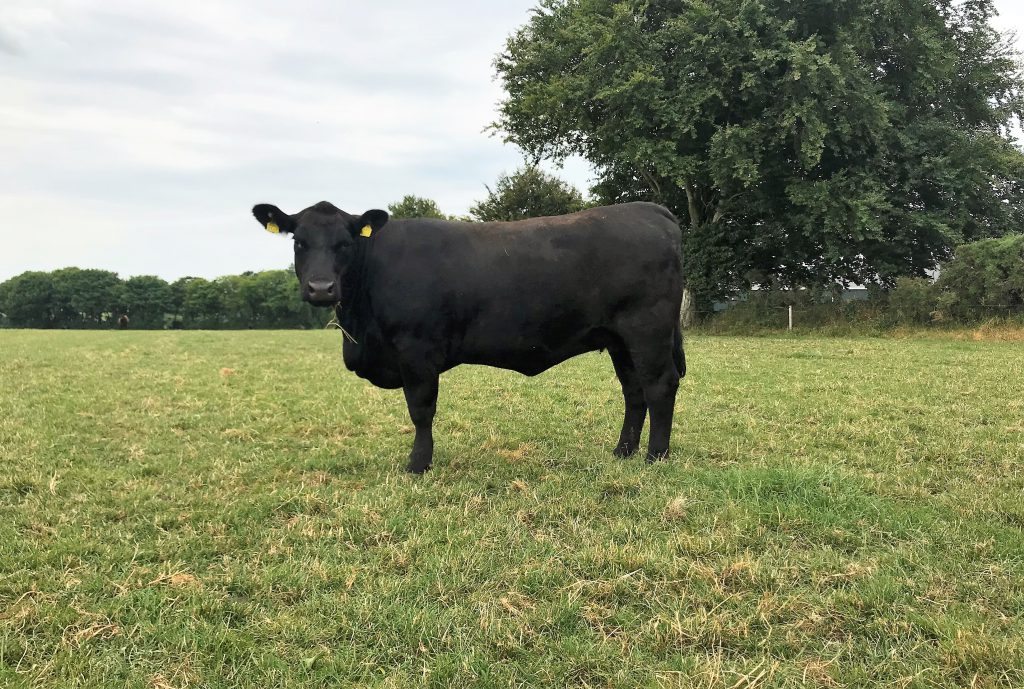 All bulls born in the herd are genotyped and sold with a genomic evaluation. All this information ensures that the bulls offered for sale at Fellfort have reliability figures.

Given that most of Fellfort’s bulls are sold to dairy herds, the Ryalls are providing their customers with the most accurate figures possible on the two most important traits for the dairy men – calving difficulty and gestation.

Switching to autumn-calving and improving infrastructure

Originally, spring and autumn-calving systems were implemented. However, from this year on, all of the herd will calve from August on.

“We used to find that farmers wanted some younger bulls and some older bulls and this was accommodated by the old system.

In addition, Ben outlined that the autumn-born calves are stronger and ready to thrive when they are let out in the springtime. 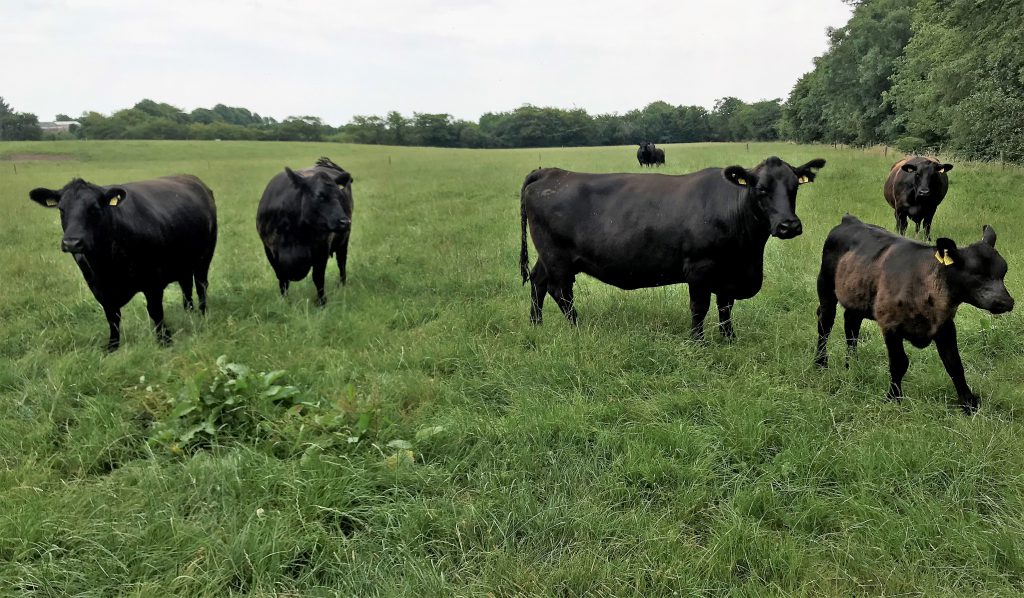 “Grassland management is also easier. When cows are due to calve in the springtime, we can’t feed them top-quality silage before because they will get too fat.

“With autumn-calving cows, we can feed great silage to the cows as they are producing milk. Growing cattle also get the best of silage,” Ben added.

Paddocks, reels and pigtails are a common sight on the Fellfort farm. Every year, water troughs are strategically placed and maintained, while upgrades to farm roadways are carried out. All of this is done to make the running of the farm easier and more efficient. 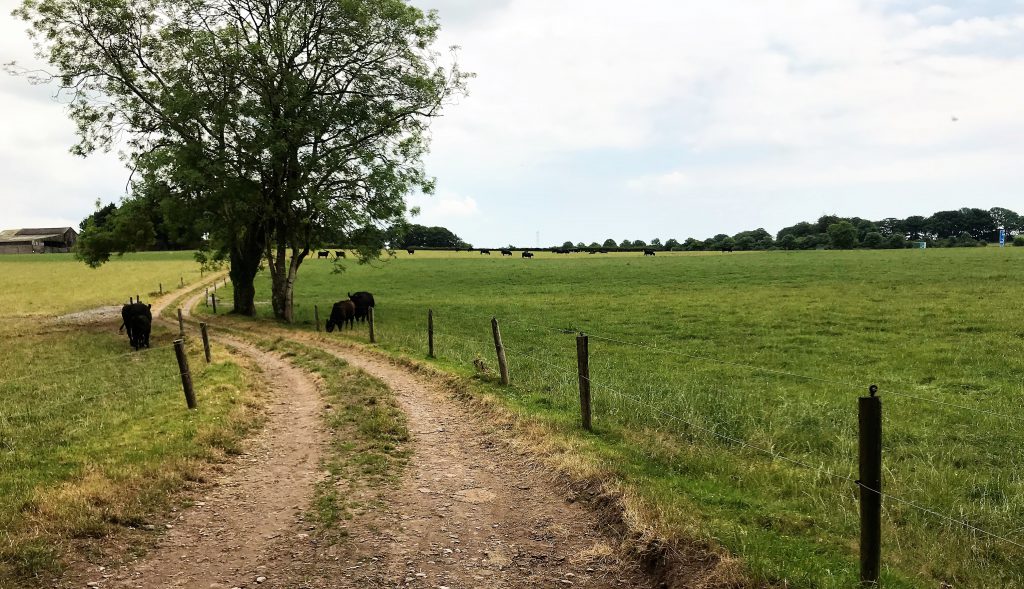 The Beef Data and Genomics Programme (BDGP) is an agricultural scheme which was launched by the Department of Agriculture in May 2015. The scheme is designed to improve the genetic merit of suckler herds and reduce greenhouse gas emissions from the Irish beef herd.

“When we are picking our replacement heifers, we will pick the ones we want visually first and then we will look at the figures. More often than not, the ones that are picked have the figures.

“They have to have the visual traits. The figures are only a guide and that’s where people are getting it wrong. It’s a tool to be used in conjunction with good stockmanship and it’s as simple as that.” 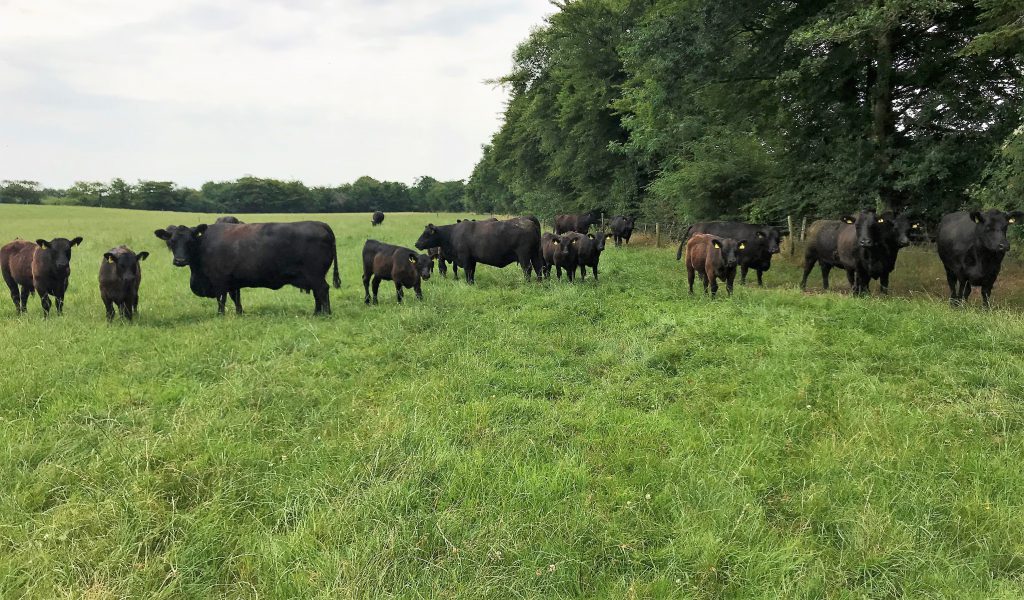 Ben and Elaine are also a fan of Whole Herd Performance Recording. On this, the Cork-based farmer said: “I have no problem with this; it’s as good a scheme as what’s available.

“You need to independently verify that the information given is the truth and there can only ever be one version of the truth.

“It’s like auditing a company’s accounts If you’re afraid of someone coming in and weighing your cattle and seeing that you are doing it the way you are saying you’re doing it, why are you afraid? Are they going to find out something?

“It’s a better system than what’s available in the UK, where it is just the breeders putting in the information; there is no information coming from the kill sheets in the factories,” Ben explained.

Like the majority of farmers across the country, the drought has effected the Ryall’s farm. All August-2017 born calves have been weaned a little earlier than normal.

These animals have access to the fresher grass, while the dry cows graze the stemmy, heavier covers.

“We’re surviving OK in the drought; but we haven’t had rain in a month. If it persists, we will feed silage to the cows. Being an autumn-calving herd, we’re not trying to get the cow to produce milk to rear the calf, so it’s easier and it is working in our favour,” Ben explained.

In a normal year, 15ac of spring barley is sown and this is reseeded in the autumn. However, this didn’t happen this year, as Ben and Elaine are trying to replenish silage supplies, which were exhausted last spring.

To date, 800 bales of top-quality silage have been made. A second cut is earmarked to be harvested in approximately two weeks time. 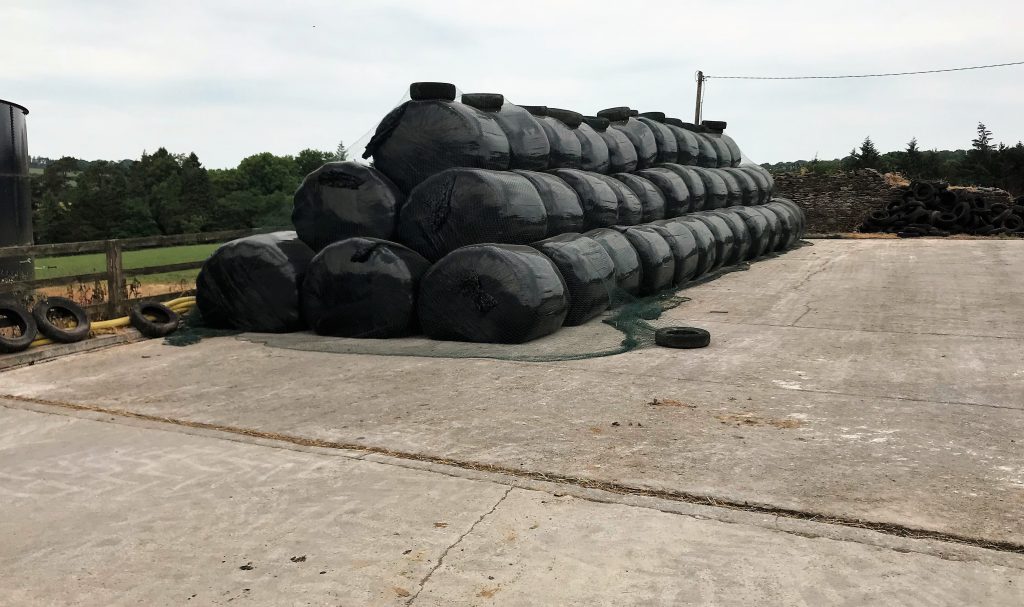 50ac of winter barley was also sown last year. This crop is doing well and will be harvested next week. All straw is used on the farm; however, the barley is sold and all meal is purchased off-farm.

Ben and Elaine have two children, Jacqui (18) – who has just completed the Leaving Certificate – and Harry (16), who helps out on the farm and has a keen interest in engineering.

The Ryalls have a very positive outlook on life and it is quite evident that they love what they do. However, they recalled a farm accident – involving a PTO shaft – which Ben was involved in 12 years ago. 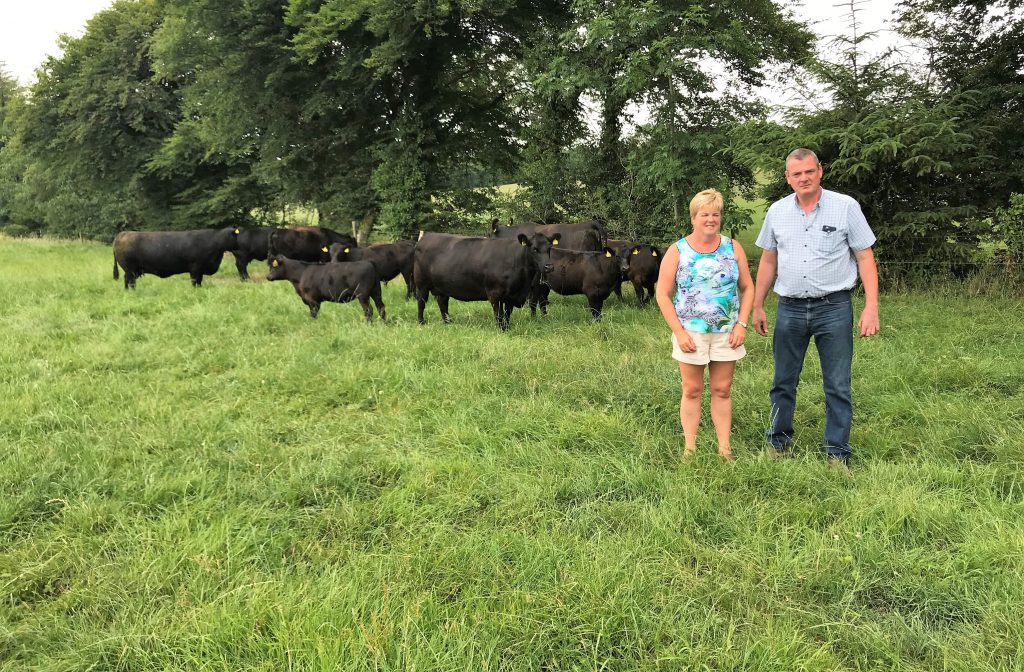 “Because of that accident, we have a slightly different outlook on what we do; we know things could be totally different.

“We looked at the bigger picture and Elaine gave up full-time work in 2010, as we asked ourselves: ‘What are we doing it all for? Do we farm to live or live to farm?’

“But we enjoy farming; when you get a belt like I did and you are put on the flat of your back on a hospital bed, you get a different perspective on things,” Ben explained.

Beef focus: 'You can read all the books you want, but it takes experience to farm'

Beef focus: 'We shouldn't envy the dairy man; we should be copying him'