Just 47% of farmers have succession plan in place – survey

Only 47% of farmers who responded to a recent survey have a succession plan in place for the future, according to the National Farm Research Unit (NFRU) this month.

In its most recent newsletter, the unit offers results around farm workforces as part of its ongoing Farmer2020 study.

This study asks farmers how many people work on the farm, comparing part-time to full-time employees and family to non-family workers.

The unit asked 1,070 Irish farmers the question: “When considering the future of your farm, is there a plan for the younger generation to take over?”

According to the NFRU, over half of the farmers polled either have no succession plan in place or are unsure of their future plans.

Other polls carried out within the agricultural sector indicate that these figures are consistent with the findings, the NFRU adds.

The NFRU also conducted surveys based on current farm labour on Irish farms.

The results show farmers are employing more part-time staff, with the number of full-time employees decreasing over the past three years, down from just over 70% to 56% in May 2018.

Advertisement
Generally, labour has steadily increased year-on-year over the past three years. Figures were very similar across all sectors.

According to survey results, in an enterprise breakdown, it was found that arable farmers have the largest number of employees per farm, employing 2.5 workers on average. This was followed by dairy farms, which had 2.2 workers on average.

Sheep and beef farms came in third and fourth place with employee numbers of 2.1 and 2.0 respectively.

The research unit also gave a county-by-county breakdown of employees per farm.

The breakdown showed quite a clear east-west divide with eastern counties having more workers per farm.

Counties Dublin and Kildare have the most employees per farm on average, with figures of 3.2 and 3.0 respectively, while counties Clare and Mayo employ the fewest, with an average figure of 1.7 workers each.

Workforce is currently made up of 81% family members but, interestingly, this number has reduced by 10% over the past 4 years – falling from 91% in 2014, the NFRU notes.

Established in 1994, the National Farm Research Unit is a respected research organisation and considered an independent authority on farming.

In contact with over 40,000 UK and Irish farmers, the unit communicates regularly by telephone, online and face-to-face interviews. 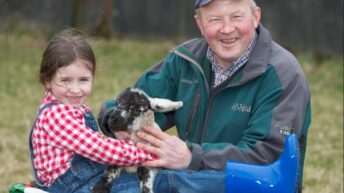