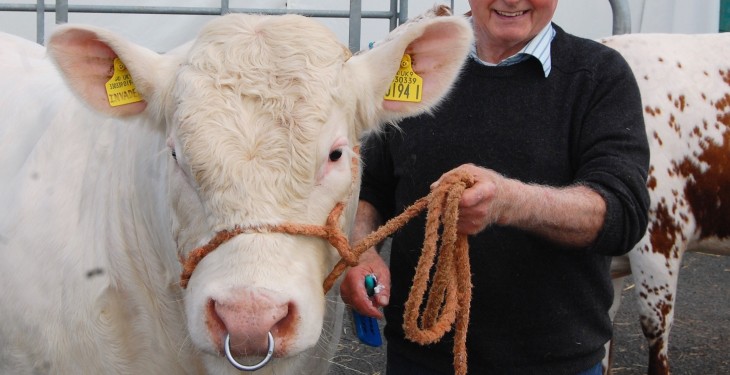 Ready for the off on Day 1 of Balmoral Show: Co Down Charolais breeder Albert Connolly with his yearling bull Brigadoon Invader

Approximately 25,000 people are expected to attend the first day of Balmoral Show today. This is the second year for the Show at its new home of Balmoral Park on the outskirts of Lisburn. Significantly, a large proportion of today’s crows will be coming from  the border counties of Louth, Monaghan, Cavan and Leitrim.

Royal Ulster Agricultural Society (RUAS) Chief Executive Colin McDonald has confirmed that the Royal Ulster Society will use attendance figures at this year’s Balmoral Show to gauge the true potential of the event moving forward. And the good news for the organisers is that the weather may well play its part in helping to encourage a large turnout of visitors for the next three days. While today (Wednesday) will be cloudy with the odd shower breaking out, there is a strong likelihood that the sun will come out to play on both Thursday and Friday. And with temperatures set to rise accordingly, the scene looks set fair for a successful three days at Balmoral Park.

Colin McDonald has also stated that there will be no repeat of last year’s traffic chaos at Balmoral 2014. Moreover, new parking arrangements have been put in place, which will do away with the bottlenecks created for visitors on arrival.

“All show traffic coming from the West will exit the motorway at Sprucefield, not Moira,” he said. “That means they will enter Balmoral Park from the Hillsborough end of the site. With regard to parking, visitors will now pay as they leave. Specific pay points will be in place throughout the show grounds for this purpose.”

The RUAS has never published official attendance statistics for Balmoral Show. When the event was held at its former home in South Belfast, the presumed figure was 70,000. But what we do know is that the survey of those attending this year will be used to help answer the fundamental question: is there merit making Balmoral Show into a four-day event? Colin McDonald has never made any secret of the fact that he wants to maximise the incomes streams generated by the Society’s flagship occasion.

He has said that the issue of extending Balmoral Show to four days is likely to come up at Society meeting in the autumn. If the RUAS decides to push for the extra day, the more likely option is to finish on Saturday rather than starting the event on a Tuesday.