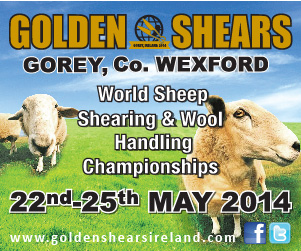 Good Food Ireland will provide the first ever all-island restaurant food experience at any agri event in Ireland when it chefs and food producers will come together in an alfresco feast for the senses at the Golden Shears World Sheep Shearing Championships in Gorey, Co Wexford from May 22-25.

Some 10,000 international visitors from almost 30 countries will attend this Olympics of Sheep Shearing making it the biggest global population of countries ever at the event. The Good Food Ireland Village will see Chefs from the four corners of Ireland, including Irish TV chefs and authors Darina Allen, Martin Shanahan, Derry Clarke and Evan Doyle, Michelin starred chefs such as Cormac Rowe of Mount Juliet and JP McMahon owner of Michelin starred Aniar Restaurant in Galway, work alongside one another in the state of the art Bosch Kitchen Theatre.

“It is a great honour to have been invited to showcase the culinary identity of our country, sheer testament from the organisers in rewarding chefs and business owners in Good Food Ireland, who fly the flag for Irish seasonal, sustainable and locally produced food, supporting Irish farmers, food producers and fishermen” says Margaret Jeffares Founder Good Food Ireland.

On the menu at The Good Food Ireland Village, the Waterford Blaa and Slaney Valley New Season Lamb will form a strong South East regional gourmet slant. Kelly’s Resort Hotel will give it traditional treatment in a gorgeous Irish lamb stew, Ballymaloe House will chargrill succulent lamb burgers, while Ananda Restaurant Dublin will slow cook new season Lamb for 18 hours, in a special mix of spices.