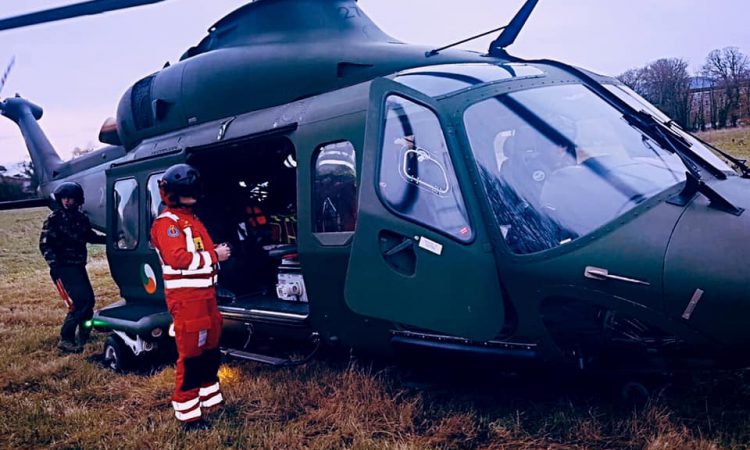 Air Corps 112 – a combined team of Irish Air Corps and National Ambulance Service crews – were called to the scene of two farm accidents this weekend.

“For the second time this weekend, the crew of Air Corps 112 were tasked to an agricultural accident, this time as a result of livestock.

Our Leonardo AW139 allowed our team to be on scene within nine minutes of takeoff and convey our patient to definitive care in 11 minutes.

The service thanked members of the public for assistance given at the scene as well as staff at Galway Ambulance Station and Saolta University Hospital Galway.

A family member of one of the farm accident victims got in touch to express his gratitude to the ambulance crew for their “heroic efforts yesterday”, thanking them for their “outstanding work” as well as the efforts of family and neighbours.

Meanwhile, on Saturday, November 16, Air Corps 112 noted that it responded to three incidents including an agricultural accident that day.

The air corps service highlighted that 53% of serious farm accidents last year involved machinery and farm vehicles, while 29% were as a result of working with livestock.

Further details on the accidents are yet to emerge at present.

Encouraging farmers to attend, Anthony Dineen, Teagasc drystock advisor, Macroom, said that the health and safety event is planned to highlight key practical issues which will help to prevent fatal and serious accidents on farms in the region.

The occasion takes place against the background of an increasing trend in farm deaths during 2019.

Up until the end of October this year, there have been 16 deaths on Irish farms, compared with a total of 15 on-farm deaths during the entirety of 2018.

The meeting will focus on a variety of safety topics on the day.