On a weighted basis, land values grew by 0.6% during the third quarter of 2018, bringing cumulative growth for the opening three quarters of the year to 1.8%, the report stated. This compares to growth of 0.6% over the comparable period in 2017.

Prices increased by 2.5% over the last 12 months, the equivalent of nearly €230, the report said. At the end of Q3, 2018, the weighted average price of farmland nationally, excluding Dublin, was approximately €9,275/ac, the research found.

The mid-west region saw the largest increase in prices in the quarter at 1.7%, largely driven by price increases in Tipperary.

This was followed by growth in the south-east at 1.6% and the mid-east at 0.9%. In the opening nine months of the year, growth was strongest in the mid-east, which equalled 4.9%.

The west noted the largest fall in prices in the year, with prices dropping 1.3% in the quarter and 3.7% over the first nine months of the year, according to the Sherry FitzGerald study.

“By and large buyer sentiment, as reported by agents, remained stable in Q3. However, there was a slight uptick in the number of agents reporting a deterioration in confidence levels.

This largely localised in the border region, where Brexit concerns are more heightened. The spectre of Brexit continues to loom large over both the Irish economy and the agriculture sector.

“Land values have increased for seven successive quarters, with cumulative growth over that period equalling 3.1%.”

In June, the Central Statistics Office (CSO) revised the NUTS 3 regions, the research noted. This saw Louth move from the border region into the mid-east and south Tipperary move from the south-east region to the mid-west.

“As a result of this change, land values in the mid-west rose at the fastest rate in the quarter at 1.7%, as this price growth was largely driven by price developments in south Tipperary,” the report stated.

“The south-east, less south Tipperary, still saw strong growth in the quarter at 1.6%, only marginally behind the mid-west, with increases in the value of farmland in Carlow and Kilkenny seeing values in the region rise in general,” according to the research.

Although at a slower pace, price growth was still robust in the mid-east and the midlands, with growth in the quarter equalling 0.9% and 0.8% respectively.

In both the quarter and over the first nine months of the year, the west was the only region in the country to see a decline in prices.

The border region – impacted by the spectre of Brexit – has seen activity levels decrease, but prices are largely holding constant, according to the Sherry FitzGerald research.

Overall, land values remain the most expensive in the mid-east, where the average price per acre was approximately €10,800, the report said. Contrastingly, the west region saw the lowest land values at under €6,500/ac, according to the research. 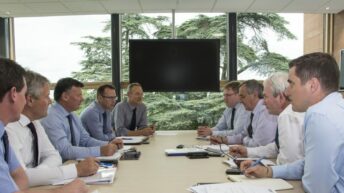