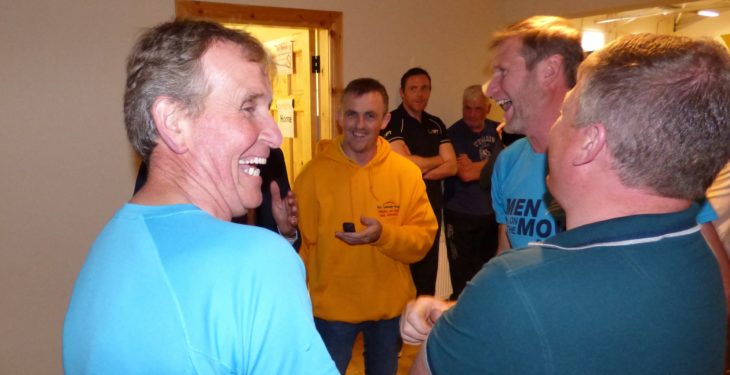 Ramelton dairy farmer Billy McMahon didn’t think he had a lot to lose when he joined the ‘Men on the Move’ initiative in Ray Community Centre, Co. Donegal.

However, it turned out he had 3st to shed, and he feels all the better for it.

After getting recommendations about the sessions, he decided the time was right for organised exercise. “It started in September 2015, and I heard positive things about it from other dairy farmers. I turned 50 that year and I had decided that I wanted to do something to become more active,” he said.

“So many signed up on the first night that I had to wait until it was being run again that December. I thought I was fit, but I didn’t realise how unfit I was until I started the course,” said McMahon, who continues to be involved.

The initiative got underway after Ray Community Group – which is based at a community centre between Milford, Ramelton, Kerrykeel and Rathmullen – registered its interest in 2015 in a men’s exercise programme with Donegal Sports Partnership.

Fiona Boyle, community centre treasurer and former chairperson, said that a few months later, Karen Guthrie from the Sports Partnership offered them the ‘Men on the Move’ pilot programme.

“We provided the facilities and organised tutors, with the Sports Partnership providing funding for the first 12 weeks, as part of a research programme through Waterford Institute of Technology.

“Other groups operated in Falcarragh and Lifford, and the ‘Men on the Move’ initiative started in Mayo about five years ago.

“We wanted to encourage 30 men per area to sign up, and 88 men turned up in Ray for the health check, which found that two men – one from the farming community – had insulin-dependent diabetes. Others had high blood pressure. The men were timed as they walked or jogged,” said Boyle.

The HSE-funded programme was designed to be self-sustaining, and after three months, the men agreed to pay €25 a month for the twice-weekly sessions.

“At the moment we have between 50 and 60 men doing the programme, with two tutors, one doing circuit training indoors and the other outdoors. Just looking at the men, they have lost weight and improved their Body Mass Index (BMI). Their mental health has been much more positive,” Boyle said.

“The programme has been a huge success. Farmers and other people may be active, but they may not be getting enough exercise. If exercise was a pill it would be prescribed for everyone. It’s a wonder drug – it’s just not in tablet form,” she said.

Not alone did McMahon enjoy the sessions, but he lost a massive 3st, and started to take part in adventure races. Running, cycling and kayaking are now part of his routine.

It took perseverance and hard work but what I liked about it was that I got to meet people outside farming circles from my own area. I might have seen them previously but I wouldn’t have known them.

“We always did stuff as a family but, in the past, I would have given more time to others than myself. This was a treat for myself. I really enjoyed all the exercise and learned to swim last winter, having had a fear of water. I’m also 3st lighter, even though I haven’t changed my diet,” he said.

The interaction with people from other walks of life was highly enjoyable, he found. “Farming has become quite a lonely occupation. Unless you have a fairly large farm, you can’t afford to pay for help, and you’re doing a lot yourself,” said McMahon, whose wife works part-time.

“I had a very busy life as I am also a board member of Aurivo, representing Donegal farmers, but taking part in this initiative gave my life a whole new dimension whereas in the past it was mainly work, and business.

“A lot of farmers are caught up in expansion, so it is all work, work, work. They do very little outside farming. I found myself looking forward to the Tuesday and Thursday nights, and I was getting my work finished up earlier because I was more focused,” said McMahon.

Having suffered from depression in the past, he now has a whole new positive outlook on life. “I got a lot of help. One of the things I had been told to do was to exercise but I ignored that. Turning 50, and coming through depression, I thought I needed to give this a go, and my head is in a great place now,” he said.

“Working on a farm, you do things at your own pace. You’re never pushed whereas our trainer pushes us,” he said. While there are other farmers in the group, the chat is not about farming.

It is ‘switch off’ time and we talk about anything and everything but farming. The people I chat with include: a lecturer; an accountant; and a lorry driver. It’s about having fun.

When he was affected by depression, he would have been unable for this level of exercise, he said. “You have to be at the right stage, and I was ready. When you’re in the depths of depression, you are so tired that putting one foot past the other is an effort.”

Those suffering from depression can literally take small steps, he said, by taking short walks for leisure. He encourages farmers in other parts of the country to take part in any similar initiatives, where available. “It is well worthwhile.”

A key factor in attracting him was the rural location of the hall where classes are held. “One of the reasons I went along was that it was so secluded. I didn’t want to be seen to be doing this, so it was fine to be out on a dark road with a headlight. Now I’m out in cycling shorts and I don’t care who sees me.”

Karen Guthrie, sports development officer with Donegal Sports Partnership, said a lot of farmers have taken part in the initiative.

Farming can be a very lonely, isolated profession. Some farmers have no real contact with others, which isn’t healthy. There can be a lack of exposure and a reluctance to take holidays.

“It can be hard to step away from farming, as there is always work to be done. Taking part has broadened their horizons,” she added.

“While farmers may be pulling and hauling as well as walking the fields, taking part in the programme really benefits them – the strength and core work provides them with a different dynamic. Their everyday tasks come so much easier and they are getting their work done more quickly,” said Guthrie. 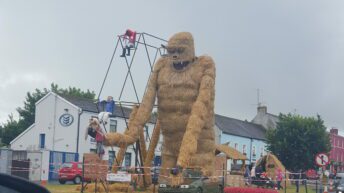