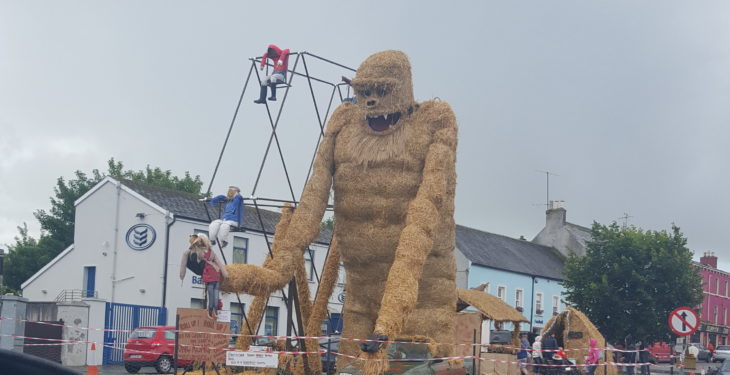 Everyone knows they are a competitive lot in Kilkenny – and that extends to Conahy Vintage Club which won this year’s Durrow Scarecrow Festival for the third year in a row.

A supersized King Kong, complete with ferris wheel and Mystic Meg, delighted the crowds this year.

For anyone who missed the colour and creativity of Durrow Scarecrow Festival, the award-winning King Kong is currently on display at Jenkinstown, Kilkenny. He makes his presence felt on a green area outside the house of Conahy Vintage Club Chairman and vegetable grower, Michael Bergin.

The club, which was formed six years ago, has big plans for King Kong, he reveals. However, they are top secret (for now).

“Leslie Byrne of Kilkenny Gates, who is a club member, came up with the idea of creating a dinosaur for the wellie race three years ago, and we won the overall prize.

“We then brought the dinosaur to the St Patrick’s Day Parade in Kilkenny. It was so big that we wondered what we would do with it after that, so we then said we would bring it to the Durrow Scarecrow Festival,” said the Conahy Vintage Club Chairman.

We covered the dinosaur with straw to make it look like a massive scarecrow, and we won that year. It drew a fierce crowd, and we wondered how we were going to beat that.

“The festival wanted us to enter again in 2016, and we asked ourselves how we were going to beat the dinosaur. Just before Christmas, Leslie was in the butcher’s shop in Castlecomer – it was the year of the floods – and the butcher asked Leslie what we were going to do for the wellie race. They joked that we would have to do Noah’s Ark.

“We did that, but it didn’t win in the wellie race competition. However, we did it up and made more characters, and entered it for the Durrow Scarecrow Festival, and won there again.”

The inevitable question arose – how would they beat that? “Everyone in Durrow was anticipating something big,” said Bergin. Leslie Byrne came to the rescue again with a suggestion of a ferris wheel, which led to an idea of a gigantic King Kong, and a carnival theme, complete with Mystic Meg.

The Conahy club members started the creation in July, with 15 to 20 adults meeting up at night. They made a 26ft high King Kong from steel, wood and straw, while Leslie Byrne made the ferris wheel.

“We took a picture off the internet, and used a measuring tape, multiplying the measurements by 100. We are farmers, not engineers,” laughed Bergin.

Their past experience helped, he said. “To get it all in scale was the hard part. It was also difficult to get King Kong to stand – he had to be anchored properly. We took him up and down a lot, but the night before taking him to the festival, we got it right.

“A wonderful carpenter, Shem Kavanagh, made King Kong’s head, face and hands. We reused the metal from previous characters. We have two very important lady members. Vivienne Wallace made King Kong’s beard, and Eva Holmes created the faces for the dummies on the ferris wheel. Our teenage children all helped and worked together.

Everyone had different skills from those making the tea to those stitching the body, and making the other characters. There was a job for everyone, and the craic we had every night was great. It’s our version of the men’s shed.

“We met three nights a week for the first two weeks, and then every night for the final push, which was over two weeks. The 10:00pm tea was very important,” said Bergin.

Conahy Vintage Club’s designs have become synonymous with Durrow Scarecrow Festival, with the area where the entries are displayed dubbed ‘the Conaghy half-acre.’

The Conahy members are up for a challenge for next year’s competition. “Taking part is great. Everyone got involved. It was a great community project and we would welcome anyone who wants to take us on.”

Meanwhile, it’s back to the day job for Bergin whose vegetables include kohlrabi and romanesco. He was at Iverk Show, Piltown, recently, and guess what? His vegetables won several awards. You just can’t take that competitive spirit out of Kilkenny. 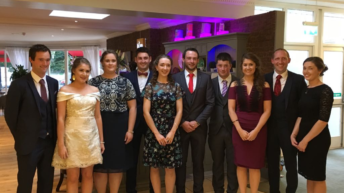