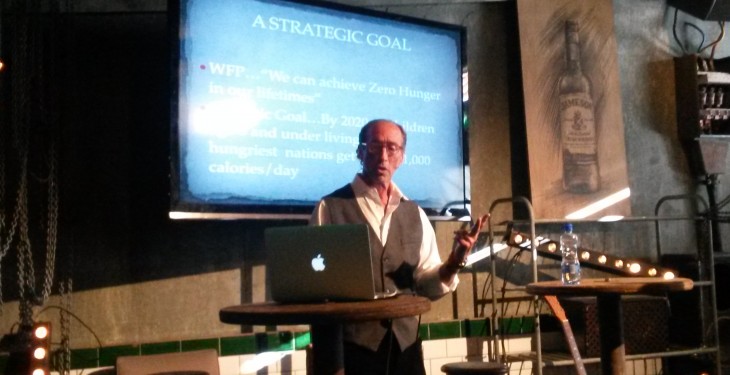 Jeff Manning, ex Executive Director of the Californian Milk Processor Board speaking at the Food Summit.

What is arguably the world’s most successful advertising campaign to get people to drink milk, ‘Got milk?’ was an ad campaign that did not originally feature the product, the man behind the campaign revealed.

Jeff Manning, one of the main people behind the massively successful ‘Got Milk’ campaign in the US was talking at the Food Summit, as part of the Web Summit in Dublin this week, where he said that the key to such a successful campaign centered around a strategy that was pliable and sustainable and not ‘made up’.

“The most important strategies in the world are true, we did not make up milk deprivation.” The goal then, he said, was to create a contemporary, interesting and funny campaign.

And key to that, he said, is simplifying the idea, making it understandable and persuasive.

The dairy campaign, which started in 1993, saw most of its spend go towards television advertising. “We wanted to reach people 30ft from the fridge with the TV on. I don’t care if people in a restaurant see a ‘Got milk?’ ad – no one drinks milk in a restaurant. People drink milk at home, so we got into peoples’ homes.”

However, he said it wasn’t all plain sailing and admitted that he made a third of a million dollar mistake at the beginning. “We got Hollywood stars to not drink milk and then talk about how much they miss it and nothing, not an article was written. The reason was, it wasn’t news.”

When he spoke to reporters about the lack of coverage, he said, their reaction was that ‘you made it up, it’s not newsworthy’.

‘Got milk?’ on the other hand was now and interesting, he said. “And we realised that ‘got milk’ was the brand, not ‘milk’. We could not have got Jay Leno to talk about ‘milk’ but he talked about ‘Got milk?’ on his show.”

“‘Got milk?’ does not show the product…and we sold this to the board of directors – not showing their product.” Jeff, who was Executive Director of the Californian Milk Processors Board at the time signed off on the advertising campaign in 1993 and it has been named one of the 10 best commercials of all time by a USA Today poll.

He also said that it’s necessary to make the idea persuasive and to touch people 4-5 times a day. “An idea has to penetrate five, six, seven times a day before it penetrates.” To help with this the ‘Got Milk?’ campaign was given to food companies, who piggybacked their product on the milk campaign.