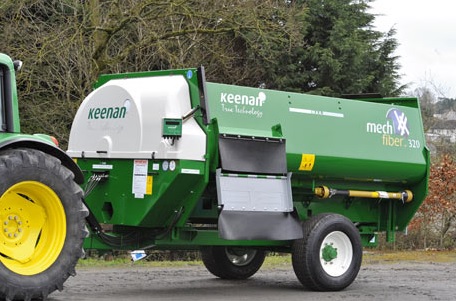 Keenan Systems has confirmed that it has signed a franchise agreement with Shengmu Livestock Equipment, giving the Shanghai-based machinery distributor the rights to sell the Carlow-manufactured diet feeders throughout China.

The deal was announced to coincide with this week’s visit by an agri-food delegation from Ireland to China. It should be worth around €7 million in additional turnover to Keenan over the next three years, according to company Executive Chairman Gerard Keenan.

“We will be offering paddle feeders ranging in capacity from five cubic meters up to 28 cubic meters. They will be sold in tandem with our Pace and In Touch software,” he told Agriland.

“As a consequence we will be working with dairy, beef and sheep farms of all sizes in China.”

Shengmu’s Sabrina Cao said that the franchise agreement will allow Chinese livestock farmers to benefit from the precision technologies that Keenan has designed its feeding systems on.

“It’s all about delivering improved performance on farm,” she said.

“We will be selling both the feeders and the tremendous nutritional expertise that is available from Keenan as a complete package.”

According to the latest Rabobank figures, domestic milk production in China is set to grow significantly over the coming years. However, a high proportion of this dairy output will be secured form high input systems, similar to those found in North America and mainland Europe.

Gerard Keenan believes that it is this growth that will help secure Keenan a foothold in the machinery sector in China.

“There is a dearth of specialised livestock nutrition expertise in China at the present time. And it is our intention to help fill this gap with our feeder range and the backup management systems that we offer. Our feeding systems have already proven themselves in many countries around the world,” he said.