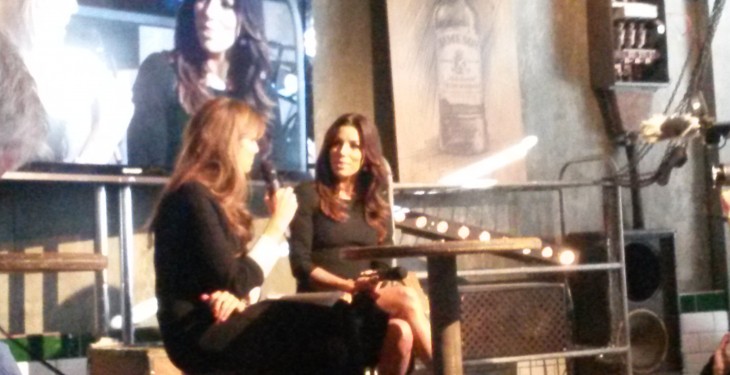 Eva Longoria at the Food Summit.

Everyone should be concerned about where their food comes from and who picks it, Hollywood actress Eva Longoria told a packed audience at the Web Summit in Dublin.

She was interviewed by Jemima Khan on her latest documentary, Food Chains, which looks at poverty among food workers at the Food Summit.

The history of farm labour in the US, she says, is a history of exploitation and she got involved in it because she eats food. “I still believe agriculture is the backbone of America,” she says in the documentary.

Food Chains looks at tomato pickers in Florida and Longoria told the Dublin audience that if you buy local you support sustainability and local farmers and workers. “But the bigger thing you can do is go to your grocery store and ask where they got the tomatoes or lettuce. Consumers can drive that and can change the world.

“It’s up to them (consumers) to put pressure on the grocery store and fast food chains and to say ‘I will absorb the penny more for a pound’.” A penny more paid by the consumer, she says, can ensure the farm workers get a pound more. “It’s dramatically changing the farm workers’ lives.”

“Most (food) companies have consolidated and they are all owned by big corporations and they are very scared of things like this documentary. One of the big gains we got with the documentary was that Walmart signed onto the fair food programme, which is huge and a big gain for us.”

She got involved in helping publicise the poverty among farm workers in the US because she eats food. “People ask were my parents farm workers…no…if you buy produce at a store you are connected and people should pay attention to where their food comes from.

“I grew up on a ranch and my dad did not let us eat fast food, because he was cheap!” We were constantly being reminded to turn off the lights, turn off the water when brushing our teeth, she said, and the same went for food. “We grew food like squash, potatoes and lettuce but just for our family and my dad was like ‘why would we go out to a restaurant to eat when you have fresh squash?’

“That’s when I learnt about seasonality of food and so many restaurants do that now.”

She said consumers should buy organic produce because it means the farm workers were not sprayed by pesticides.

This is her second documentary on the agri-food industry, the first was on child farm workers. The documentary, she says, looks at who makes the most money and why the money is not filtering down to the workers.

In the US, she said, one fourth of a salad is picked by a child and the problem occurs because the system is failing such families. “It’s an awareness problem. You see generations of families, so it’s a cycle of poverty. Keeping kids in education is not a priority, so they drop out and keep working and unfortunately the system is failing them.

“This is a human rights issue, it’s not an immigration issue.”