The Irish Dairy Board (IDB) has announced a major product expansion into the Chinese market with the launch of Whole Milk under its new Kerrygold Chinese trade mark, 金凯利, pronounced ‘Jin Kai Li’.

The new product and trade mark was unveiled by the Minister for Agriculture, Food and the Marine, Simon Coveney at a ceremony in Beijing during the Irish Trade Mission to China.

This announcement is a key part in IDB’s strategy to develop premium dairy products for markets in milk deficit regions. China will be an immediate route to market for additional milk Irish farmers will produce when milk quotas are removed in April 2015.

Welcoming the announcement Minister Coveney said Ireland is entering an exciting time for the dairy sector as milk quotas are abolished from next April.

“The development of premium dairy products and the building of routes to markets, in particular in emerging dairy markets like China, are essential if we are to deliver on our objectives under Food Harvest 2020. IDB’s investment in China and the entry of Kerrygold Whole Milk into the Chinese mass market opens up considerable market opportunities for the additional milk we are expecting post 2015.”

Kerrygold Whole Milk will be sold through major Chinese retailers, regional shopping networks and e-commerce retailers and supported by a marketing campaign that focuses on ‘Craftsmanship’.  Extensive consumer insight research found that Chinese shoppers responded positively to the image of Ireland as a pure, green island, with clean family farms, where the tradition of craftsmanship is married with the modern technology required to ensure high standards of safety and quality production.

Marketing investment will be focused on in-store visibility and sampling programmes in addition to driving brand awareness through social media and search engine marketing.

The ceremony also marked IDB’s recent investment in its in-market infrastructure in China. With teams now in Beijing, Shanghai and Shenzhen, IDB China plans to double its ‘feet on the street’ by 2015. In preparation for the removal of milk quotas, the IDB has been expanding its in-market operations worldwide, placing more staff in-market, working alongside its consumers, customers, distributors and local partners. In the last 12 months alone, IDB has expanded operations in the UK, Spain, Germany, America, Africa, the Middle East and now China.

The launch marks IDB’s entry into the Chinese mass market, said IDB spokesperson Jeanne Kelly. “We plan to make Kerrygold Whole Milk as widely available as possible by building a sustainable business with national, regional and e-commerce retailers. There are few more significant countries than China in terms of opportunity for dairy growth and we see considerable potential to develop our business, not only in liquid milk, but also in cheese and butter.”

Extensive consumer insight research, carried out by IDB,  found that Chinese shoppers responded positively to the image of Ireland as a pure, green island, with clean family farms, where the tradition of craftsmanship is married with the modern technology required to ensure high standards of safety and quality production. The portrayal of the Irish farm, family owned and passed between generations, resonates positively with the Chinese consumer.

Kerrygold Whole Milk will be sold through major Chinese retailers, regional shopping networks and ecommerce retailers and supported by a marketing campaign that focuses on ‘Craftsmanship’.

The Chinese liquid milk market is estimated to be worth €18 billion with an annual growth rate of over 10%. Over 11 billion litres of liquid milk are consumed in China each year, compared with just 670 million litres in Ireland. Kerrygold will be marketed in China, as in most other countries, as a premium imported product. The premium segment of the milk market incorporates 28% of milk volume and 45% of the value of the market.  It is estimated that this market segment includes over 186 million households in China. 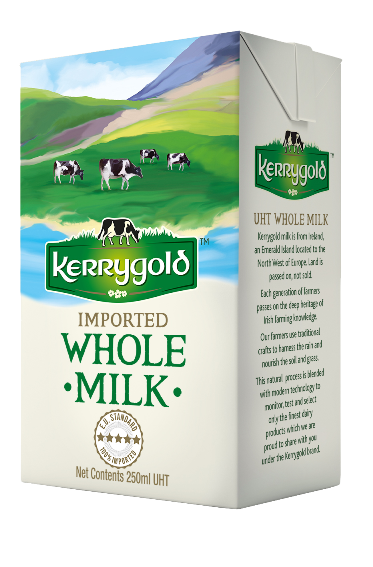