No growth in Chinese dairy market expected until Q3 2015 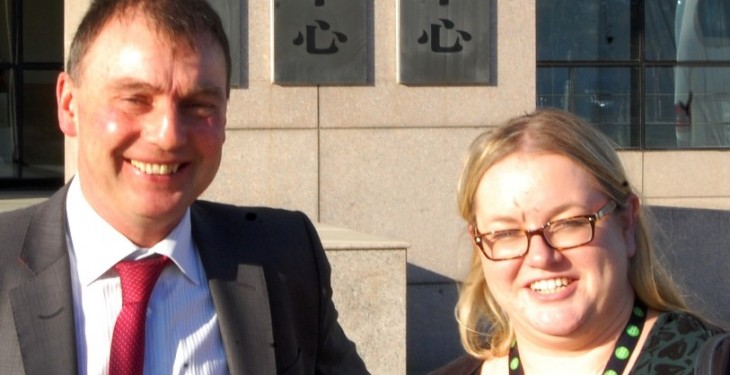 ICMSA President John Comer chatting with Glanbia's Fiona O'Toole as they arrive at the Sanyuan Food Group factory near Beijing.

Rabobank Dairy Research specialist Sandy Chen told members of the Irish trade delegation visiting China this week that it will take up to 12 months for the Chinese market to strengthen significantly.

“A combination of large existing stocks and the perfect global conditions in which to produce milk have served to dampen the Chinese market for dairy products during the second half of 2014,” he said.

“And it will take until the second half of 2015 before Chinese buyers become more active in terms of purchasing enhanced levels of imported product.

Members of the visiting delegation were told that, in the longer term, China represents a growing market for milk powders, whey and UHT milk.

“But, in relative terms, it is not keeping pace with the increase in China’s growing demand for dairy products. Moreover, most of this additional milk is being produced from imported corn and soya. So it is not cheap.”

The members of the trade mission were also told that safety of dairy supply is a key driver for Chinese consumers.

“New Zealand has been at the centre of a number of food scares over recent years,” the Rabobank specialist pointed out.

“As a consequence, Chinese importers have sought to diversify their sources of dairy product supply. And this is, potentially, good news for milk processers in the EU. New Zealand currently supplies 80 per cent of China’s imported dairy requirements. This figure could well drop over the coming years.

“Family income levels in China will continue to increase substantially over the coming years, particularly in urban areas.  With growing affluence comes a greater recognition of the value which high quality protein can play in the diet. And it is within this context that Irish dairy processers can develop a competitive edge within the Chinese market.”