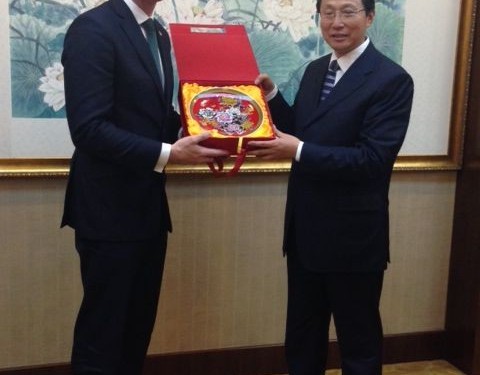 Chinese veterinary inspectors will officially inspect Irish beef slaughtering and processing facilities at the beginning of December, according to the Minister for Agriculture, Food and the Marine Simon Coveney, at the end of the first day of Ireland’s agri-good trade mission to China.

If all goes well this should pave the way for Irish beef to feature in Chinese retail and catering outlets before the end of June next year, the Minister added.

“These followed on from meeting held back in 2012. And the difference in the atmosphere within which both get-togethers were held was remarkable. It is now obvious that the Irish food industry has gained the trust of the Chinese government. And this is crucially important in the context of our food industry seeking to develop a workable relationship with the food retail and processing sectors in China.”

Minister Coveney went on to confirm that beef imports into China may well increase by one million tonnes per annum over the next number of years.

”This represents a growth in the market of around 4 billion. And we must be part of it.

“The added bonus for Irish processors is that they will be able to target the every high end of the Chinese market. This encouraging news must also be assessed in tandem with the expectation that Irish beef will soon be sold in the US. Both developments represent a tremendous news story for Irish agri food and, in particular, Ireland’s beef producers.”

The Minister also confirmed that he had requested permission for additional Irish pork processors to secure access to the Chinese market.

“Pork exports to China have been a good news story for Irish companies over the past number of years. And, obviously, we want to build on this for the future,” he said.