All eyes on factory quotes as IFA threatens further action 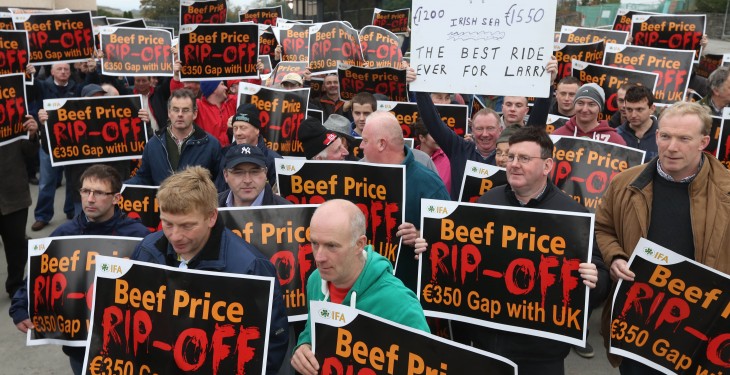 There is likely to be increased focus on beef quotes from factories early this week due to threats of further IFA protest action following a 24-hour shutdown last week.

The seasonal peak in grass-finished cattle supplies continued in recent with the kill reaching 36,800 head on the week ending November 25, the highest figure to date in 2014.

According to Bord Bia cattle prices showed little change over the last week. The majority of steers were purchased at a base price of €3.65/kg on the Quality Payment System with selected lots making up to €3.70/kg. Heifers were being purchased on average at €3.70/kg with selected lots of heifers making up to €3.75/kg. These prices exclude the €0.12/kg bonus which is payable on in-spec QA animals. Prices paid for O grade cull cows are generally making between €3.15 to €3.25/kg.

Cattle supplies at export meat plants for the week ending October 25 stood at 36,800 head, which was up 3,000 head on the figure for the equivalent week in 2013. Cumulative supplies for the year to-date are 11% or 136,000 head above the figures for the corresponding period last year currently standing at 1.36 million head. Throughput of prime cattle is up by 10%.

In Britain, reported cattle prices from the AHDB are steady with GB R4L grade steers averaging at Stg 360.2pence/kg DW (equivalent to just over 480c/kg DW) for the week ended October 25. Retailers continue to focus on round cut promotions ahead of Christmas, which has in turn seen demand for steak cuts and forequarter cuts slow.