Over 100 malting barley growers protested today at Boormalt, Athy, over poor malting barley prices and what they say is the failure of the IFA’s malting barley committee to conduct meaningful negotiations on behalf of growers.

He went on to say that the IFA had promised to look at the price of barley this year for growers, but nothing was done. “Last Tuesday night there was a meeting in Athy of malting barley growers and the IFA was given till lunchtime Friday to come back with news of progress and if they didn’t a protest would go ahead. We heard nothing back from the IFA. We went there as IFA members but there was no one from the hierarchy there today.”

“Growers were finding it hard to pass the previous limit, not to mind the new one. This meant that tillage farmers were afraid to forward sell because of this.” The spokesperson estimates that only about 5,000t out of over 120,000t crop grown, was forward sold. 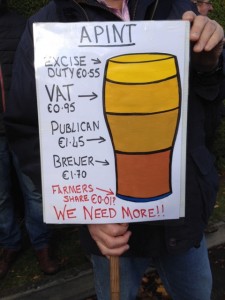 The growers were then given a price on September 17 which, they say, was the lowest price of the year. “Last year malting barley was making €169/t and this year we got €147/t.” Input costs have gone through the roof, he said, and the current price would not have been accepted a few years ago.

He said the growers argued all season long to try alleviate the situation but no leeway was given. “The product is top notch. We can only grow one variety, we are restricted with nitrogen and roundup and we’ve jumped through hoops on quality measures over the past couple of years.”

Boormalt is the second largest producer of malt in Europe and is a subsidiary of Axereal, the largest French grain co-operative. It is believed that up to 500 growers supply Boormalt in Ireland.