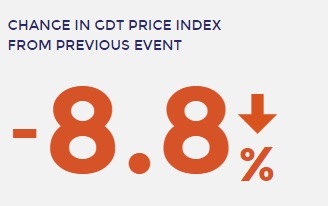 Dairy markets have reassessed the New Zealand production outlook, according to economists at New Zealand’s ASB bank and this drove much of the 8.8% price decline in prices at the latest Global Dairy Trade auction.

In the latest update from the bank on the dairy market, it says the weeks following Fonterra’s large cut to its production forecast, and the official drought declaration, markets feared the worst.

“Subsequently over February, markets bid up prices aggressively in anticipation of New Zealand milk being scarce on the ground – now they’ve had a change of heart.

“The production outlook is simply is not that bad,” it says.

According to ASB rain has come to many parts of New Zealand, easing the fears around the worst impacts of the drought. Also, he says while New Zealand milk production growth continues to slow, it is not falling off a cliff.

“On this basis, we see the latest result as a correction in the market’s earlier overreaction, but importantly, we think that the upward price trend remains intact. Even taking into account the decline, WMP is up 28% since the start of the year,” it said in the update.

In other words, according to the bank the story of slowing global dairy production (on the back of lower farmgate prices) still holds.

Also, it expects demand to gradually improve, particularly in China, where lower energy prices and interest rates should boost disposable incomes and in turn demand.

ASB says these factors are likely to maintain upward pressure on dairy prices as the year progresses.