Whiskey in the jar for Tullamore, work begins on €35m new distillery 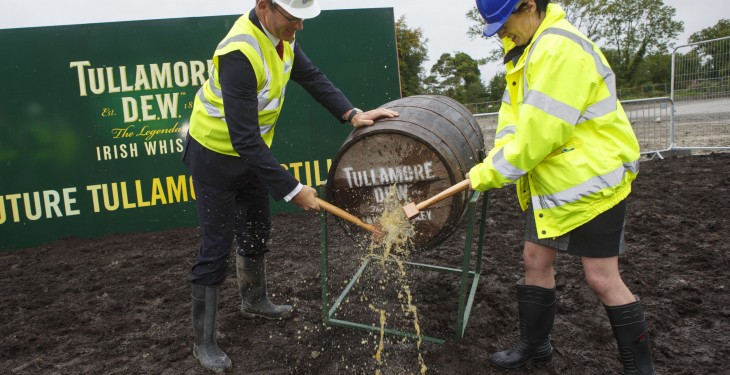 Whiskey production is coming back to Tullamore for the first time in 60 years with the official turning of the sod on Tullamore Dew’s new pot still whiskey and malt distillery.

The Minister for Agriculture, Food and the Marine, Simon Coveney TD this afternoon officially turned the sod on the new distillery, which is being built by William Grant & Sons.

The state-of-the-art distillery, which opens in autumn 2014, will bring whiskey production back to the town exactly 60 years since the original distillery closed in 1954.

The initial €35m investment will meet the long-term production demands for Tullamore Dew, one of the world’s largest Irish whiskey brands, which is currently growing by more than 20 per cent annually.

The new distillery sits on a 58-acre site at Clonminch on the outskirts of Tullamore and the project is supporting in the region of 200 jobs at peak times during the construction phase.  The distillery, which is being constructed by Dunne BCE, an Irish subsidiary of the Dunne Group, will combine traditional distillation practices with the very latest in modern and green technologies.

When combined with the new Tullamore Dew Visitor Centre, which reopened late last year following a multi-million euro redevelopment, the total number employed by William Grant & Sons in the town will rise to 25.

Speaking at the turning of the sod ceremony, Minister Coveney said: “I am delighted to be here today to turn the sod on the new Tullamore Distillery. For many years, Irish whiskey has been one of the strongest and most distinctive products in the world, renowned for its quality and heritage, with a dual impact in terms of our exports and tourism. Tullamore Dew is one of the key drivers of this success. I would like to commend William Grant & Sons for its commitment to the town of Tullamore where it is investing significantly to ensure that Tullamore Dew is coming back to its roots.”

William Grant & Sons’ chief executive, Stella David said: “Our team is working extremely hard on the new distillery. This investment ensures that we can cope with demand as the brand continues to grow globally.  As the second largest selling Irish whiskey worldwide, Tullamore Dew plays a significant role in the success of our overall business. When we acquired the brand in 2010 we felt it was important to strengthen the link with Tullamore, which we have done through the distillery and the new Tullamore Dew Visitor Centre that reopened last year. We are proud to be bringing whiskey distilling back to Tullamore for the first time in 60 years.”

Tullamore Dew has doubled worldwide sales to almost 850,000 litres cases since 2005.  The plan for a new distillery has been prompted by the brand’s rapid growth, driven largely by increased consumer demand for Irish whiskey in the US and emerging Irish whiskey markets such as Germany, Sweden and Eastern Europe where the brand already occupies a leadership position and is outperforming its competitors, it said in a statement this afternoon.

This story was updated with photographs at 3.12pm