John Cahalan, the chief commercial officer with FBD Insurance, has argued that the insurer is losing money in marts.

Cahalan – along with the chief claims officer with FBD Insurance, Jackie McMahon – appeared before a recent sitting of the Joint Committee on Finance, Public Expenditure and Reform, and Taoiseach to discuss insurance costs.

During the same meeting, FBD Insurance came in for some heavy criticism regarding the rising cost of insurance premiums for livestock marts in Ireland.

Commenting on the matter, Cahalan said: “There are 77 marts in Ireland; we insure 52 of them. The reality is that for every euro we underwrite in the marts, it is costing us €1.30.

We’re losing money in marts because the cost of claims and the frequency of claims have gone up. The marts are fundamentally important to us as a farm insurer; this is where our customers trade.

“In FBD, we want to work with our customers – with the marts owners – to put in good risk management practices.

“Working with the Irish Co-operative Organisation Society (ICOS), the mart owners and the Health and Safety Authority (HSA) have put in a voluntary code of practice to try and improve the work practices,” he said.

Despite the fact that livestock marts are loss making, FBD is willing to write those risks, Cahalan added.

The core principal of insurance would be that the premiums of many pay for the claims of the few. So, unfortunately, as a business, we are losing money on marts.

“Everybody has to carry a rate increase to pay for some marts that have a very poor claims history,” he said.

‘Accidents cause injuries and injuries cause claims’

Meanwhile, McMahon outlined that accidents cause injuries and injuries – real or imagined – cause claims.

Speaking in general terms, he said: “The cost of insurance is determined by the number of accidents firstly and the costs of those accidents.

“The cost has two key components; it’s the cost of the compensation payment – how much we settle for – and there is the cost it takes us to agree that settlement.

He explained that a customer has a role to play in being health and safety conscious; as well as understanding and managing their risks. An insurer is then responsible for giving the right cover and ensuring that the customer has the protection that they need, he added.

McMahon went on to explain that the state has a role to play in addressing, what he described as, the “chronic and costly deficiencies that are inherent in the system that we have got”.

Meanwhile, he encouraged the Government to tackle the “pretty widespread non-cooperation and gaming of the injuries board process”. He stated that solicitors – in certain instances – are effectively manipulating the system to “essentially turn on their money machine”.

McMahon called for a “fundamental reform” of the legal system, which needs to be “radical” and “rapid”. He highlighted that for everything FBD Insurance pays out in claims, as much as 40% of that goes on legal costs.

“A minor ankle injury costs up to €54,700 in Ireland compared to €12,554 in the UK. We need to have internationally bench-marked awards and we need a consistent and objective approach to the assessment of injury,” he said.

‘We can’t have low prices and high claims costs’

But, we can’t have low prices and high claims costs.

The chief claims officer of FBD Insurance also explained that there are a lot of cases where the insurer would like to fight a claim all the way to a decision in the courts; but he conceded that it would be “foolhardy” – especially where liability is not in question – given the difficulties of trying to defend against claims where soft-tissue injuries are a factor.

This means that – in some cases – it proves more prudent to reach a settlement with the claimant rather than take the chance of incurring additional legal fees on top of a settlement reached in court. 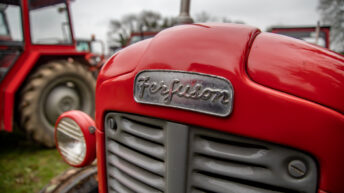 ‘No intent to deceive’ in tractor restoration mix-up