Video: Bringing in the big guns for a 36km round trip in Laois 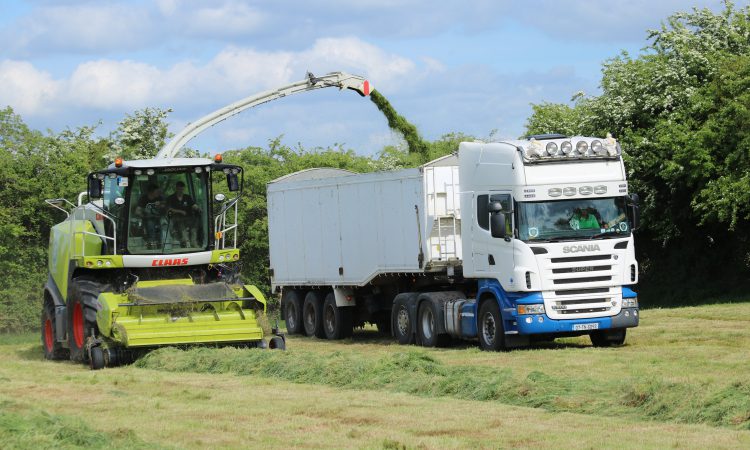 An agricultural contractor enlisted the help of an articulated lorry – a Scania – to tackle a long draw silage job in Co. Laois last week.

The contractor in question, Joe Shirley, was assisted on the job by Donie Coyne of Coyne’s Transport, as can be seen in the video below, courtesy of local photographer Arthur Harvey.

Speaking to AgriLand, Joe explained: “It was a 36km round trip. We got it done handy enough; we got it done in 10 hours. We cut 72ac on the day.

“This is the first year on that job; it was with a new customer. We might use the lorry more regularly now as it worked out pretty well.

“We had the lorry and six other tractors and trailers drawing as well,” the Laois contractor noted.

“It was a bit slow tipping it up in the yard; that was the only downside to it. Other than that it went well; it was great on the road – but you’d need dry fields as well.

“It’s not suitable for everywhere but around the Ballacolla area in the midlands it would suit in a lot of places,” Joe added.

“The silage was cut in Aghaboe and drawn to Abbeyleix. It was cut on the Sunday and the Monday…and picked up on the Tuesday.

The silage was excellent quality; the protein was about 17% or 18% in the grass and a high DMD [dry matter digestibility] for the time of the year. The nitrogen levels were low in it as well; it was tested prior to cutting. You can’t beat the sunshine.

“The lorry is fine in dry weather but you’d need a good, big yard for it  – but, on the long haul, it’s definitely a good machine.”