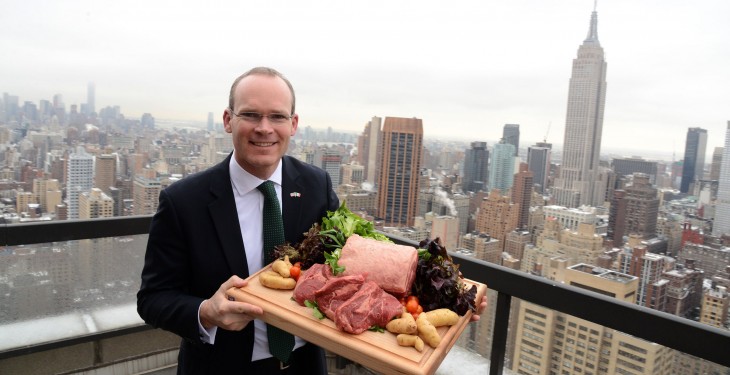 Minister for Agriculture, Food and the Marine Simon Coveney, promoting Irish beef in the US.

Ireland needs more markets for its beef and lamb exports, according to Meat Industry Ireland, which says the US and China are key target markets.

Meat Industry Ireland, the representative body within Ibec for Irish meat processors, has said it is imperative that Ireland gets immediate access for manufacturing beef into the US and for full access for beef into the Chinese market.

Cormac Healy, Director of Meat Industry Ireland, said with mixed trade across key beef export markets and that the focus at political level be intensified in order to gain full access to these markets where there is good potential for Irish beef exports in the short-to-medium term.

“Right across EU markets, a combination of strong supplies and weaker demand, together with increasing pressure to favour domestic product, particularly in the UK and France, has created a more challenging trading environment for Irish exporters.

“This emphasises again the absolute imperative of having a range of international markets available for Irish exports, enabling companies to maximise market returns through diversifying product options into a wider range of markets.”

MII has called on the Minister for Agriculture, Food and the Marine to intensify negotiations to bring about full access for Irish beef to these markets.

“On the EU trade negotiation front, MII has already made clear its view that an EU trade deal with Mercosur would be particularly harmful to the Irish meat sector and therefore the wider economy. There are now indications that these negotiations may be further intensified in the coming weeks with a new EU offer in prospect.”

Healy went on to say that Meat Industry Ireland has consistently warned that a trade deal with Mercosur will be very damaging to the Irish meat sector, not only for Irish beef but also for pigmeat and poultry.

“No deal is better than a bad deal and MII strongly opposes any giveaway by the EU in renewed negotiations with Mercosur.”

Healy also said that the idea of the EU negotiating with Mercosur on a trade deal that would inevitably open the EU market to increase volumes of imports from Brazil and Argentina, two of the world’s largest meat producing countries would be extremely damaging to the Irish economy and particularly to the agri-food sector.

“It makes no sense to progress these talks when it would be far preferable to prioritise the completion of negotiations with Japan where there is much stronger overall benefit to EU agri-food exports.

“While these negotiations appear set to progress, we need the Irish Government to urgently press ahead and overcome whatever barriers exist to finalising bilateral discussions with the US and China and allow our exporters get on with the business of developing these important markets.”