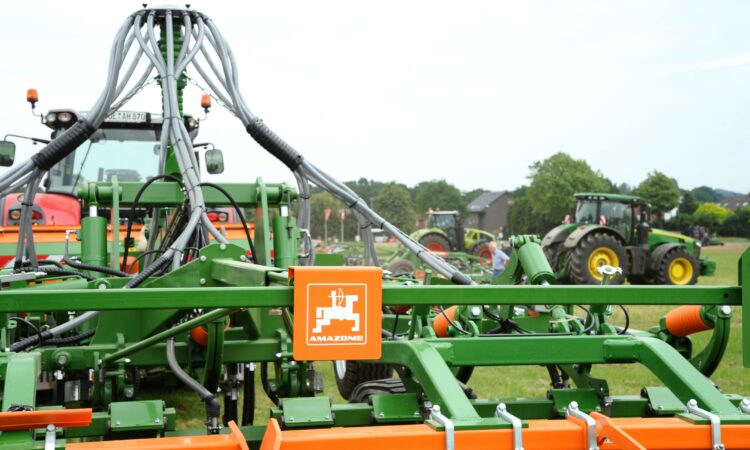 We may never hear it said publicly, but there is a growing awareness within the trade that the agricultural machinery business is rapidly approaching something of a crisis.

The crisis is not one of a declining market or brutal legislation – they have always been features of doing business – but it is centred around the process of innovation.

The word innovation is being pressed into use more frequently than ever, not least by Amazone which is keen to emphasise how it is taking the benefits of digitalisation and putting them to use – improving the efficiency of its machines. 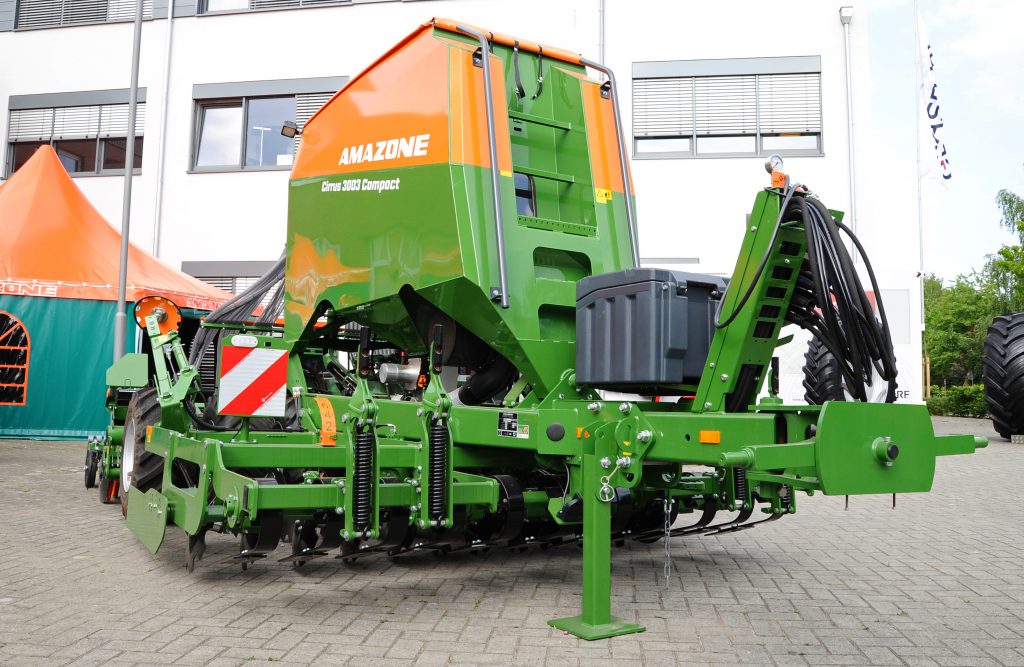 Yet the question remains: Just how much of the digital technology that is presently available to farmers is actually being used? Where do manufacturers go from here?

Amazone has been around since 1883; that’s the year in which it was founded by Henrich Dreyer at Gaste in western Germany.

The first machines were grain cleaners. They were of such “strength and beauty”, according to a friend we hasten to add, that they should be named after mythical Greek warriors. This is a theme that the company has returned to – in its current marketing drive.

However, the company soon moved on to other machines as the first wave of farm mechanisation swept over Europe. In addition to winnowers (grain cleaning contraptions), root cleaning machinery and cultivation equipment was developed; the first auger-type fertiliser spreader appeared as far back as 1917.

The very fact that the company survived the vagaries of the first half of the 20th century in Germany suggests that it was responding to the farmers needs with machines that were both innovative and reasonable in price. 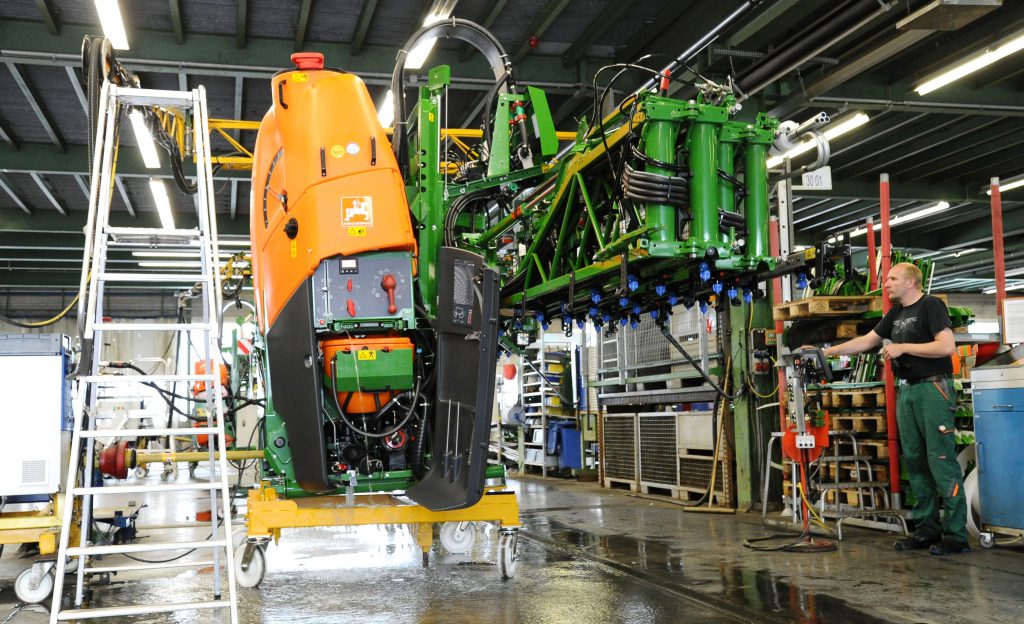 Fast forward to today; the company is still owned and managed by the Dreyer family; they are keen to not only create new products but also employ the latest assembly techniques in building them. 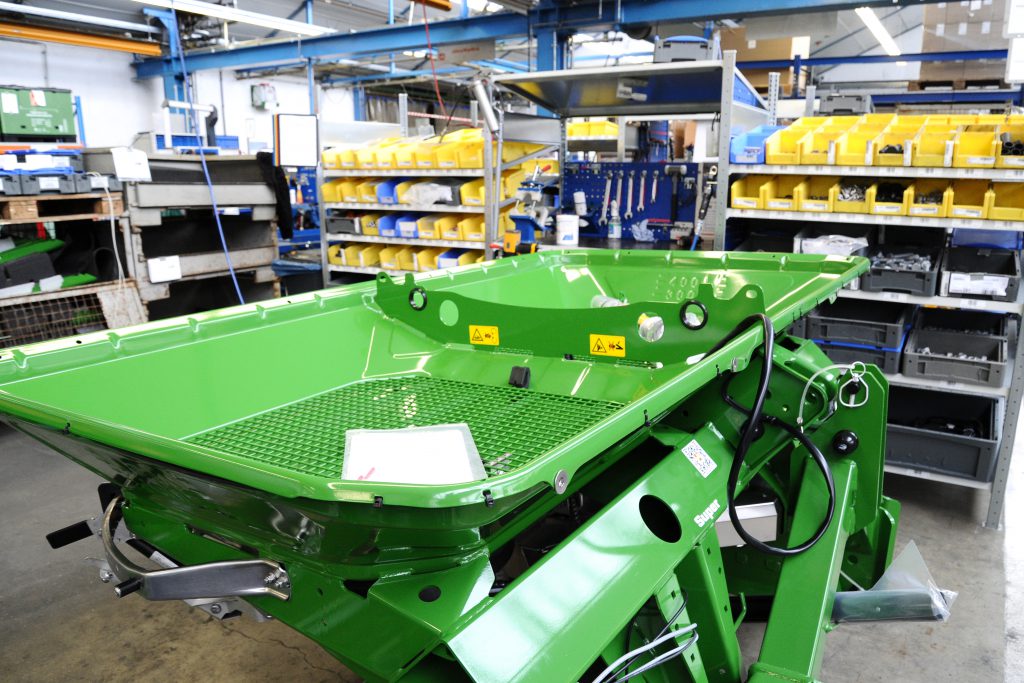 A new automated paint facility in the Hude-Altmoorhausen factory was opened last year; it’s evidence of Amazone practicing what it preaches – when it comes to modern production methods.

With 138 years of history behind it the company is still striding forward with further openings and new products unveilings.

Doncaster, in the north of England, is the latest location for expansion with the purchase of around 30ac of land – upon which it is building its new UK headquarters and demonstration area.

Such a commitment indicates that Brexit holds little fear for Amazone; the company is just continuing to do its business, albeit under new circumstances. Christian Dreyer explained: “We have bought this 12ha farm because we believe in that market.”

The company has also moved ahead with new products. It is telling that of the three silver medals it won at Agritechnica last autumn only one was for a traditional engineering innovation; the other two were very much in the digital technology sphere. 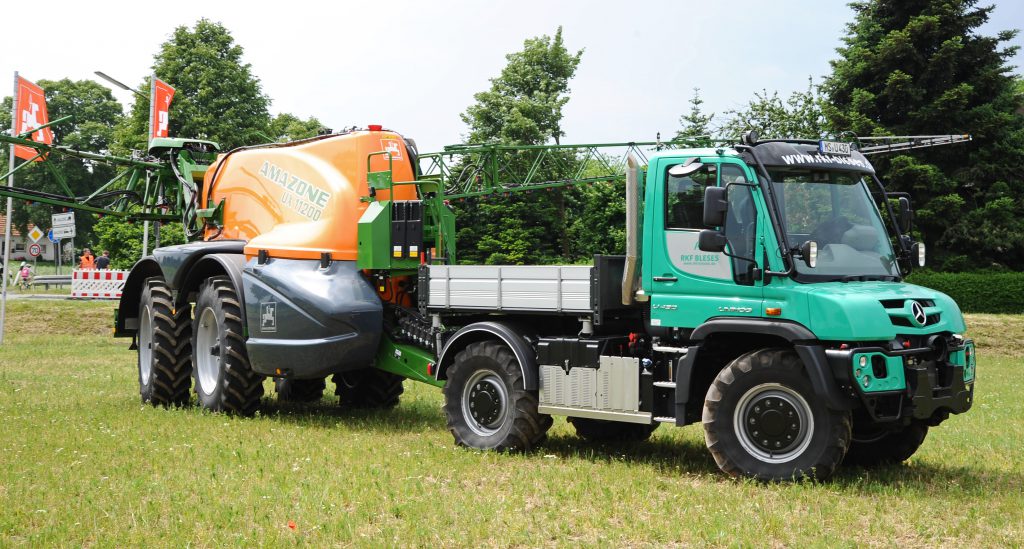 The ‘mechanical’ award was for a new boom control system – designed to reduce inaccuracies caused by whip and yaw. The two ‘digital’ entries comprised a training suite (which uses both virtual and augmented reality) and a new data sharing platform.

The latter was jointly awarded to the several machinery manufacturers that had committed themselves to creating a common protocol – for the collection and management of the huge amount of data now generated by end-users in the field.

It is this last innovation which, inadvertently, acts as something of a bellwether when it comes to the future of data collection and deployment in agriculture.

Christian Dreyer is adamant that ‘agrirouter‘, as the system is called, “will fly” – despite not all the major manufacturers getting behind the idea. The comparison with ISOBUS is unavoidable; the company is well aware of the mixed reception and uptake that ISOBUS has received.

However, it is equally aware that many farmers are in the position of having to manage their enterprises on several different software packages back in the office – a situation it feels is nonsensical. 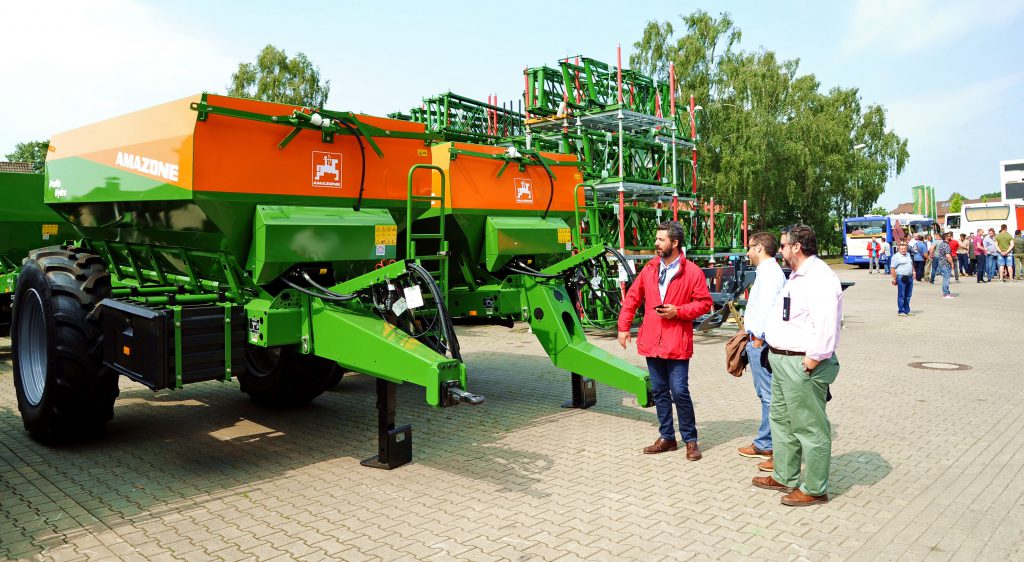 When asked about the future of the machines themselves neither Christian Dreyer nor Andreas Hemeyer (director of sales) foresee any startling new inventions or rapid evolution of what is presently available.

Continuous improvement of the present range is the ethos of the moment. They see environmental concerns as the major driving force behind future trends.

Christian specifically mentions ground water quality as a growing concern which Amazone, as a manufacturer of fertiliser spreaders, has some small share in the responsibility for maintaining.

Likewise for chemical application, Amazone’s section control and variable application rate features (deployed on the latest sprayers) can apparently yield savings of 10-20% in chemical use (compared with standard machines). 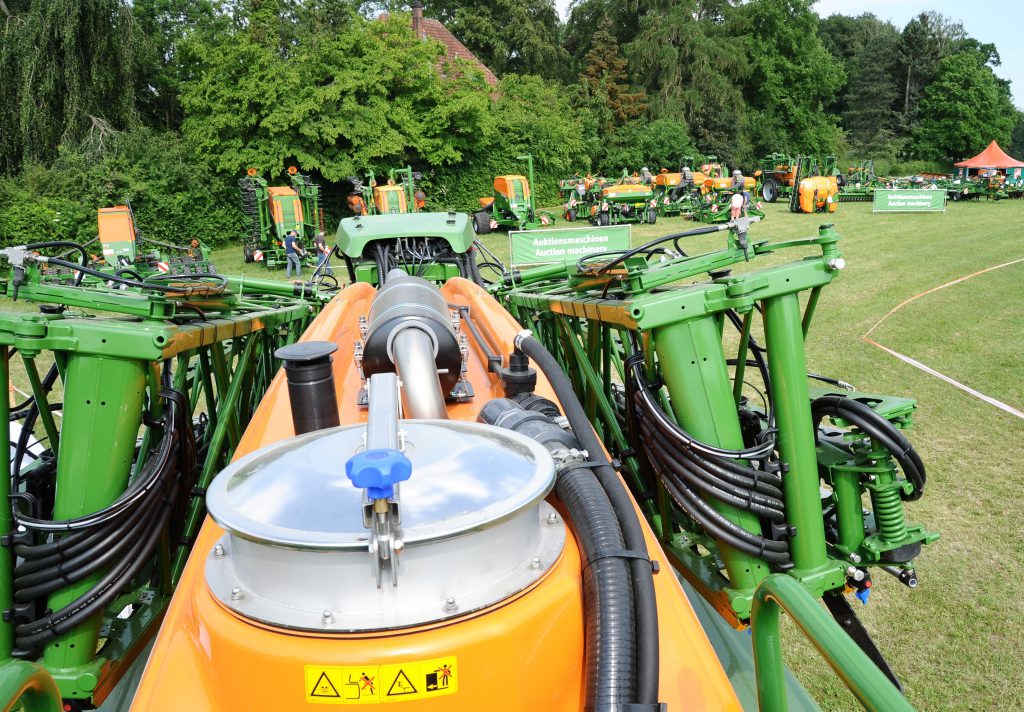 ‘Optimisation’ is now the underlying reference point for all its development work.

However, Amazone still has a business to run; while it’s out to match and surpass the competition it still needs to serve the needs of all growers. 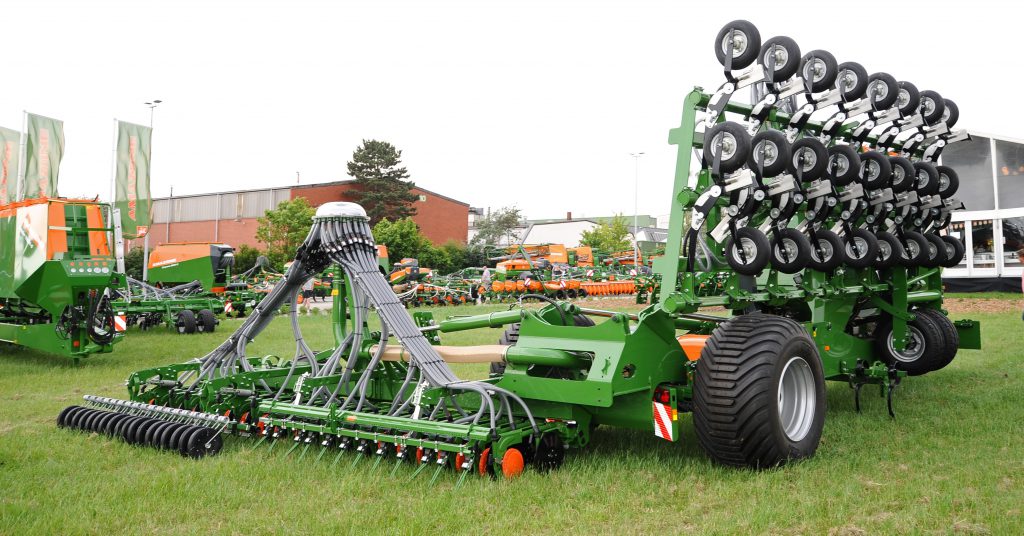 In between all the assurances of digital advancement, Amazone is keen to point out that it still produces “bread and butter machines” for growers with less expansive budgets. Much of this still forms the core of the entity’s near half-billion euro annual turnover.

It’s here that we return to the crisis mentioned at the beginning of this article. Amazone, along with many others, has found itself trying to cater for a market which appears more divided than ever before. It’s trying to satisfy the ‘progressives’ and the ‘conservatives’ – within the farming community.

The difference in what is available across the range of fertiliser spreaders, for example, is far greater than it has ever been before – thanks to digital technology tugging away at the higher end of the market. 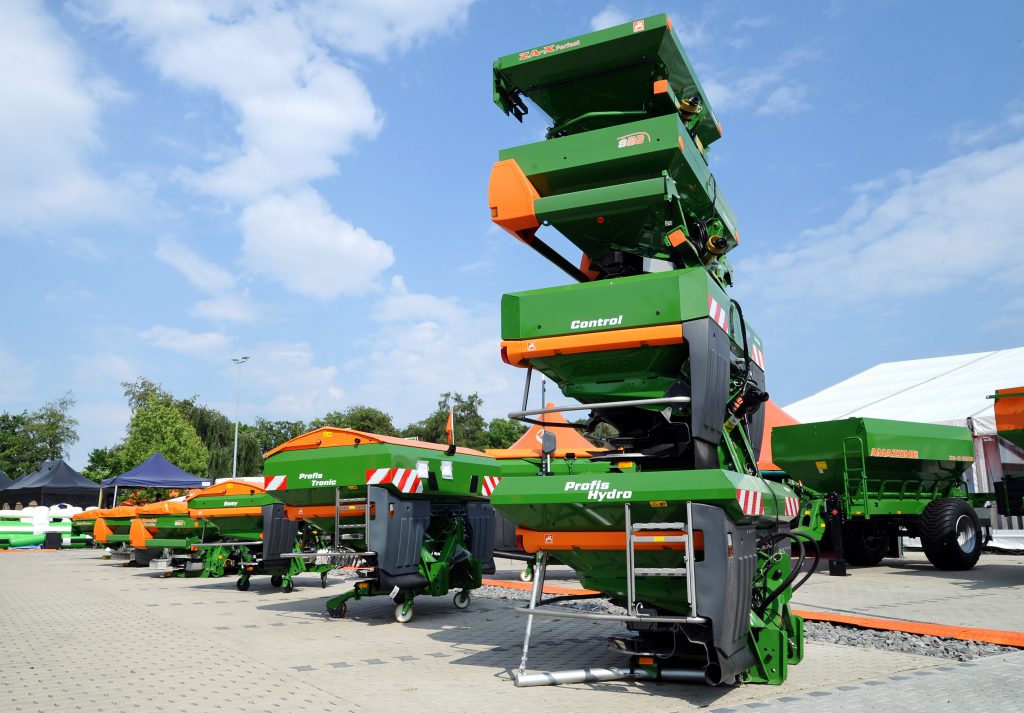 Away from the debate over technological progress the company maintains itself as a family business.

The open day at Gaste attracted around 6,000 invited guests from all over the world. With a good mix of dealers, farmers and journalists present, there was indeed the air of a family ‘get together’, although Amazone did nothing so crass as to promote it as such.

The other great strength of the company is that it is a single brand. This means it can focus on its chosen fields, rather than juggling a portfolio of subsidiaries about. There is much to be said for this approach in a world of accelerating change. 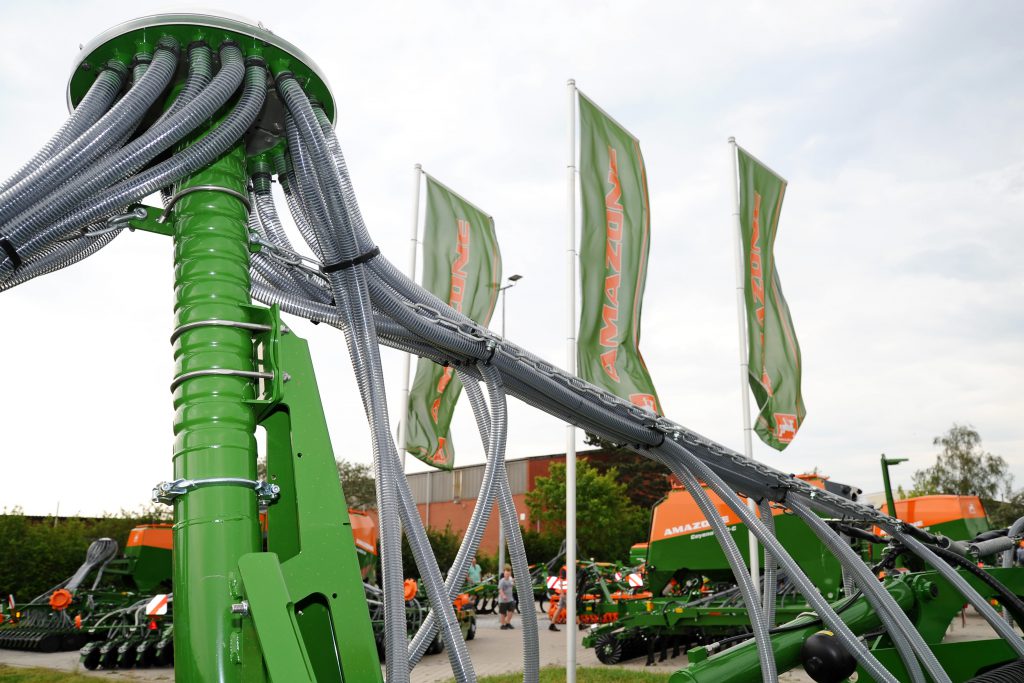 To take one’s eye off the ball is to lose the momentum necessary for growth – a danger minimised by having just the one ball to play with.

Amazone certainly gives the impression of a steady ship heading implacably into a future – a future that, in reality, is shrouded in mists thicker than have been experienced for many years. 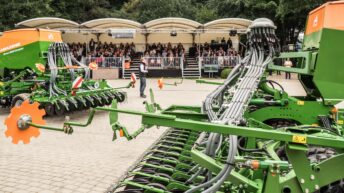 New trailed spreader amidst brace of new kit from Amazone