It would be unfair to refer to Valtra as ‘oddball’, but being a little different from the rest is one of its many virtues, according to Shane O’Connor of O’Connor’s Tractors, Knocknagoshel, Co. Kerry.

Genuine enthusiasm for the product being sold is also a virtue – and O’Connor is hardly short of that as he expands upon his belief in the marque.

Shane now runs the family-owned dealership, which was established by his father in 1964. In those early years, the business revolved solely around importing tractors from the UK. This aspect is still a major part of its operation; he continues to buy tractors from the same dealers in England that O’Connor senior established links with over 50 years ago.

“It’s all about trust,” maintained Shane, and he extends the philosophy towards his own customers. “What you sell you have to back up.”

The firm does this with a staff of five in the spares department and workshop, including his wife – Joanne – who is also active in the business. 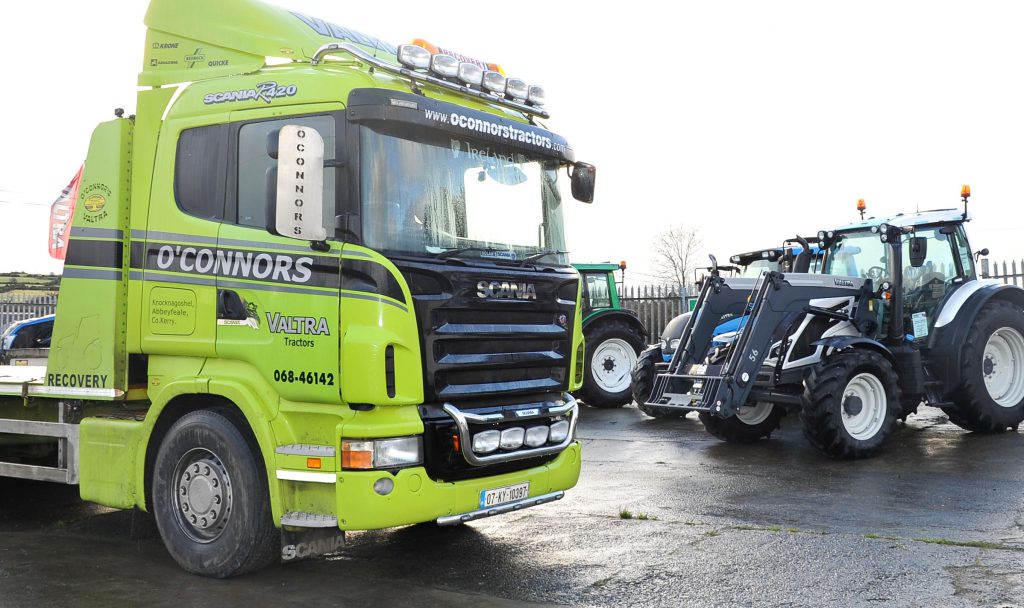 He is also keen to include Valtra in this chain of confidence – from manufacturer to end-user. It is obvious when talking to Shane that he enjoys a warm relationship with the Finnish company. Its marketing support resulted in two tractor sales to two new customers at the Ploughing, where he was present on the company’s stand throughout.

Somewhat surprisingly, he also points out that being able to choose the colour of the tractor is often a big deal for buyers.

He has been caught out before in having exactly the right tractor for a customer, but in the wrong colour!

Thankfully, the customer was prepared to wait the extra few weeks for another to be finished and brought over to Ireland. 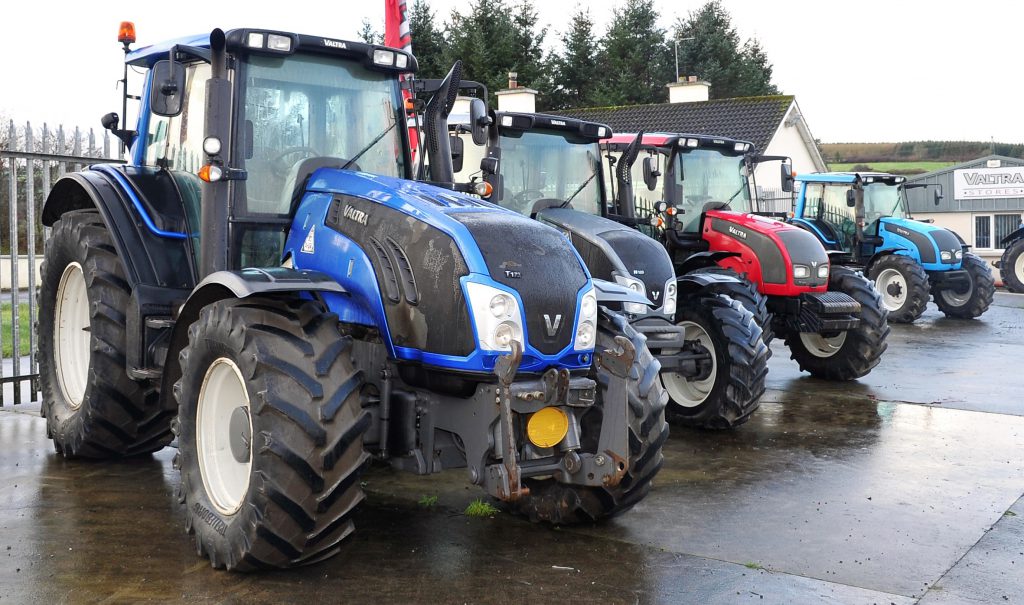 Besides the greater scope to customise a Valtra, the Aries (front axle) suspension system and Sisu engines are big selling points. It will not be long before we see the 200hp, four-cylinder Sisu engine used by Massey Ferguson in a Valtra, he believes.

The company’s forerunner – Valmet – was the first to offer a 100hp, four-pot engine in a tractor; it also pioneered the concept of ‘power boost’ – both innovations being used by its sister AGCO company, Massey Ferguson, to claim the latest landmark in power density.

Presently, it is the 150hp N154 which is proving particularly popular in his area. The increase in demand for power is being driven not by any part of the silage operation, as one might expect, but by slurry handling. 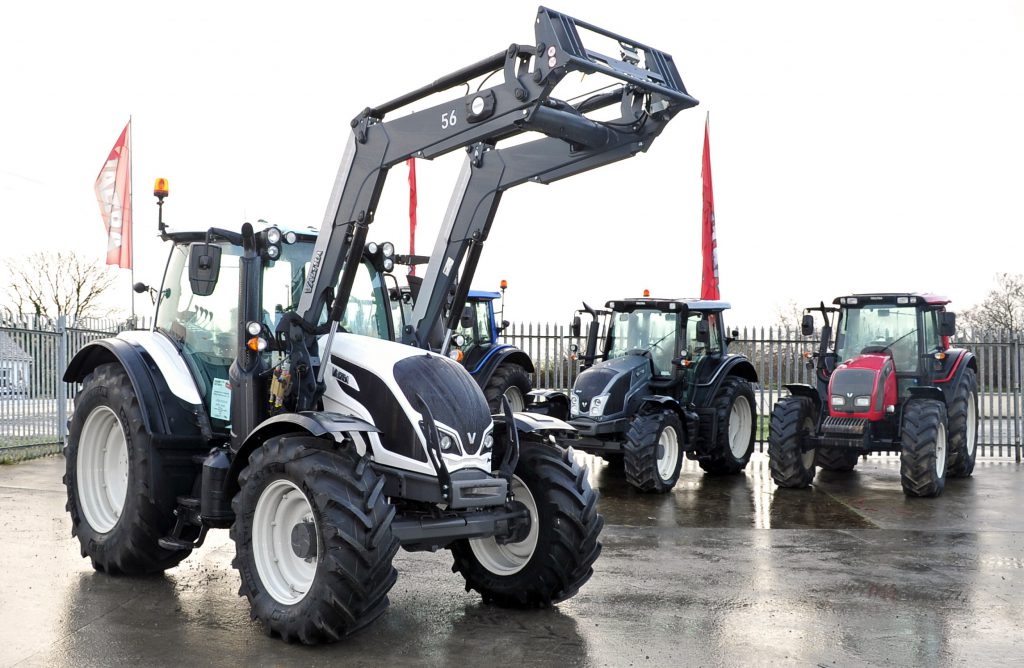 Farmers are buying larger tankers to enable quicker application. Agitators are power-hungry beasts that will take whatever a tractor can throw at them, and still want for more.

The desire for bigger tractors is also a reflection of farmers hedging their bets and planning for the future. Shane notes that they are better qualified than ever before and are doing their homework before ringing round the dealers.

It’s a development he welcomes with the emphatic observation that “Valtra may not be the cheapest, but it does deliver”. 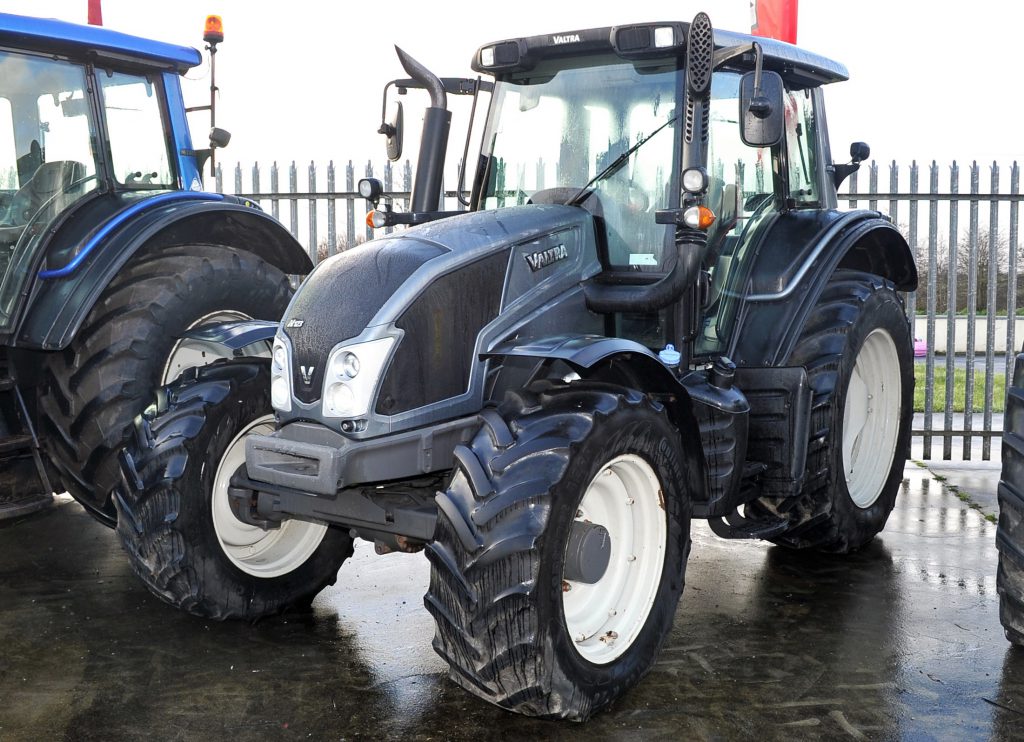 Away from new tractor sales, the firm holds several franchises for machinery. The three big ones are Amazone, Krone and Redrock – with each tending to follow its own trend.

The ‘bread and butter’ Amazone products are fertiliser spreaders in the 1-1.5t range, supplied in their basic form without the electronics that Amazone insists that every farmer should have.

Such niceties, Shane feels, are the preserve of sophisticated tillage farmers rather than those on more modest acreages found in his locality. 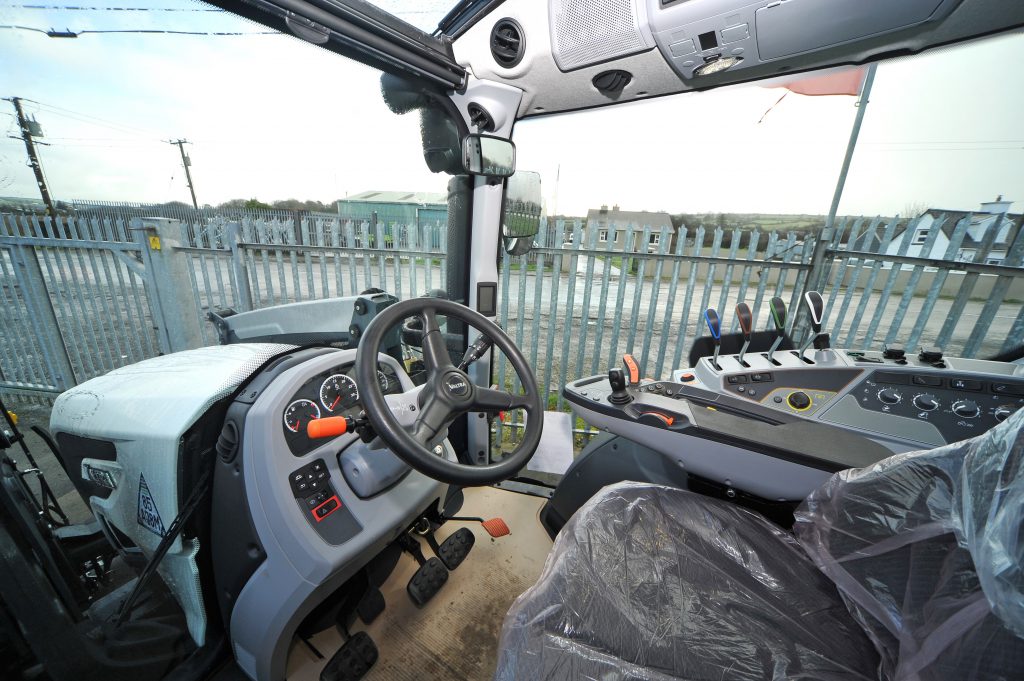 Krone mowers are another strong seller for him, especially mounted units which are enjoying something of a resurgence now that tractors are bigger and can cope with carrying the wider models.

Trailed types are falling out of use – in favour of a front and single side-mounted set-up that can be easily navigated down narrow lanes and into yards. Mowers have undergone something of a design revolution, says Shane; they are “vastly superior to the machines of 10 years ago”.

To meet the demand for slurry equipment, Shane carries the Redrock range of tankers and agitators. He says that they have a solidity that farmers appreciate; he gets very few complaints from users. 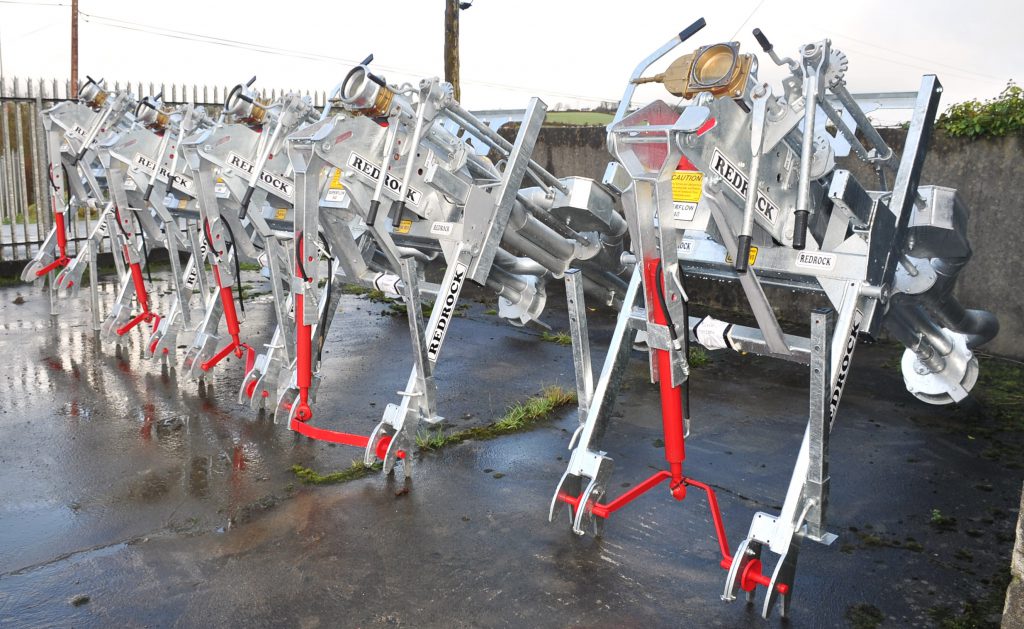 A small but noticeable increase in construction activity has also bumped up demand for dump trailers; he has been happy to supply several from the northern company to local builders.

Despite Shane’s understandable enthusiasm for selling new tractors, a large part of him still relishes dealing in second-hand machines.

Regular forays abroad see him return with a mixed bag of goodies; one half of the yard is devoted to non-Nordic tractors, which may or may not find their way onto local farms. Some are actually exported again.

Used Valtras are also brought in to support his new machine sales. With a grin, he tells me that he has even sold a few back to Finland over the years. 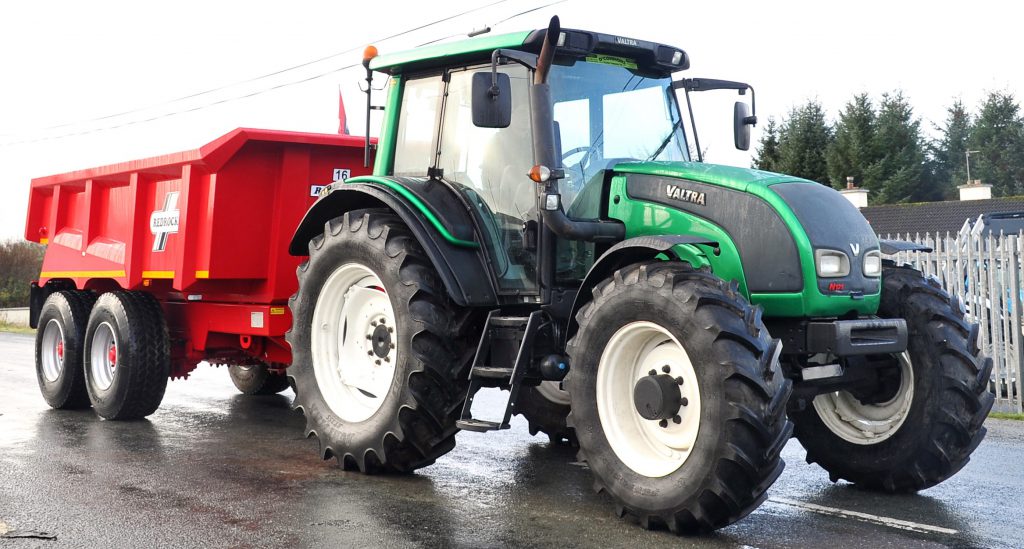 As to what the future holds, he can see farmers wanting modern machinery rather than keeping old equipment – struggling on through the years. He also draws a distinct line between modern – as in up-to-date – and electronic which, he only went as far to admit, might appeal to some of the younger generation.

Indeed, the fact that Valtra had won a ‘Tractor of the Year’ award for its so-called SmartTouch technology appeared to be of very little consequence to him – out here in the south-west of Ireland.

With the bright lights of Agritechnica not yet a month passed, the gulf between the polished assurances of global digitalisation heard in Hannover and the hard-nosed reality of life on an Irish dairy farm could hardly be wider.

Shane knows where the market is and that is where he operates – no doubt to the dismay of the ‘digital’ engineers and their laptops. 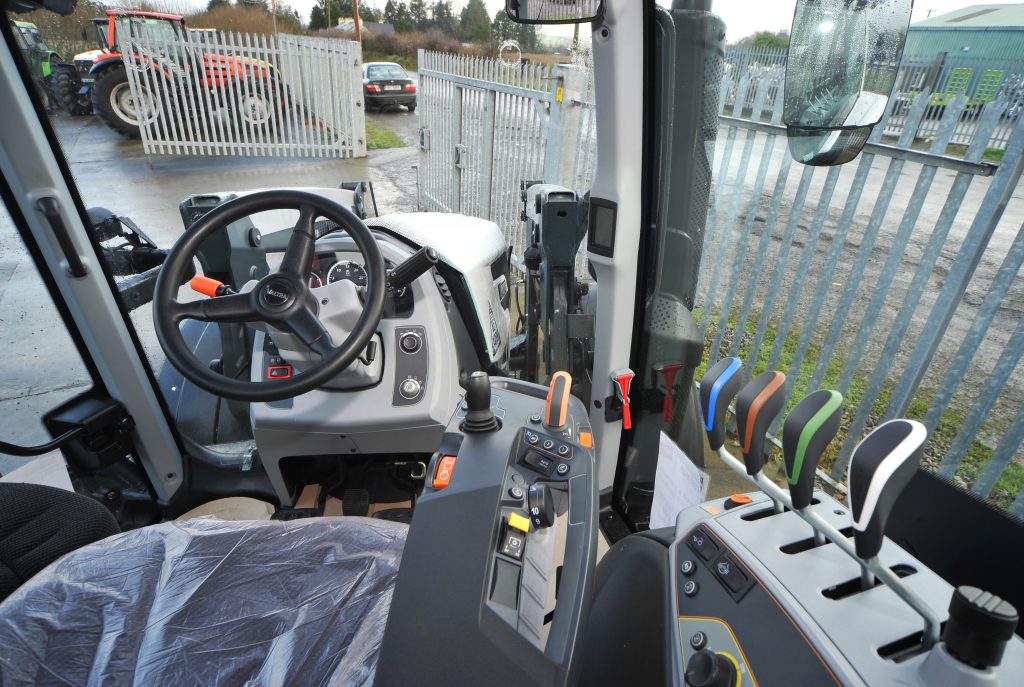 60kph for Valtra's latest tractors: Too fast or too slow?