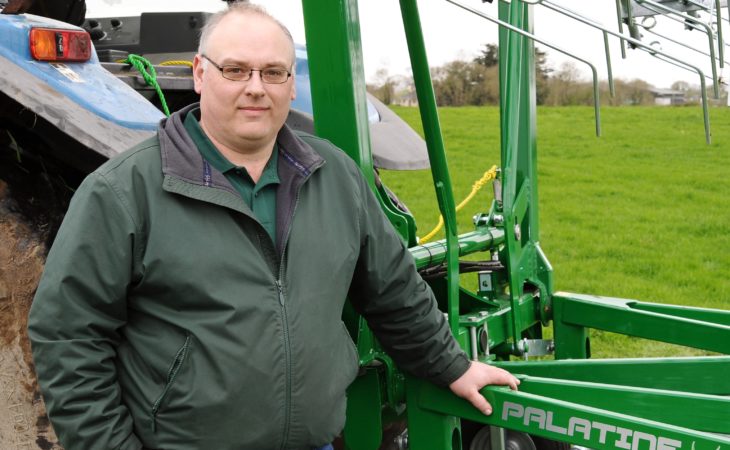 Stepping out of the comfort and routine of secure employment to concentrate on creating a new business is something that many will have considered, but few will actually have committed themselves to.

Not so for Ken Smyth (pictured above) of Askeaton, Co. Limerick; he has turned his attention to the full-time production of grass harrows this spring (trading as Palatine Engineering) and is now building on an idea that came to him four years ago. 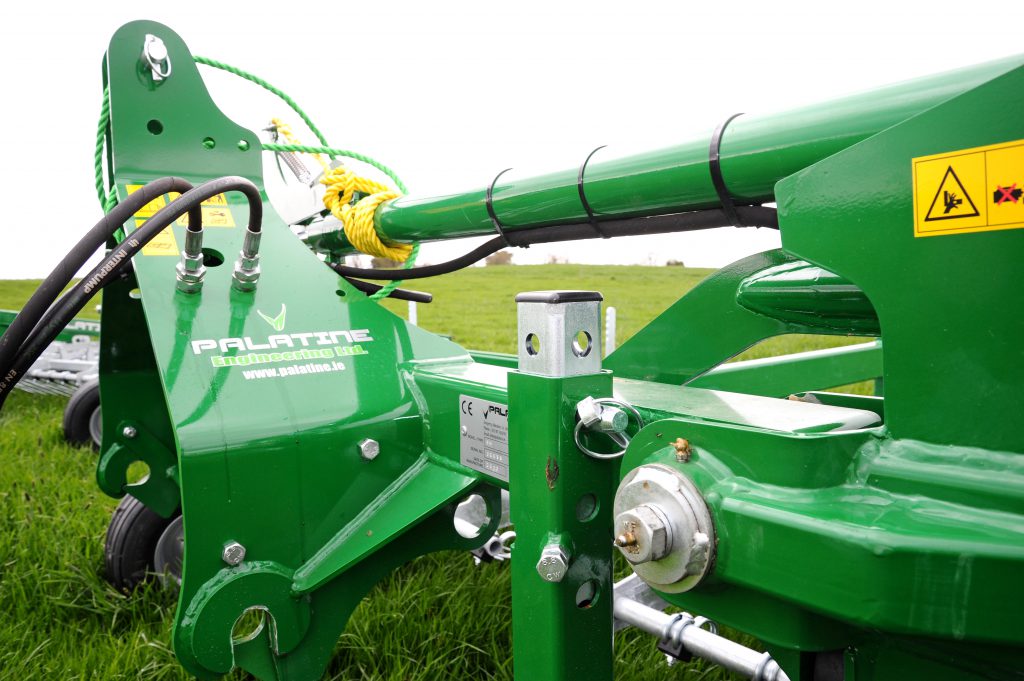 “It was while I was out topping that my mind turned to thinking there must be a better way of controlling weeds,” explained Ken, who lives on the family beef farm and does much of the tractor work.

Being an engineer at heart, and by trade, he started to research the grass harrow market and looked carefully at 14 different brands which were then available – listing their features and advantages on a spreadsheet for easier comparison.

“The 15th column was for my harrow and it listed the features I wanted to incorporate into a production machine,” he noted. He built a prototype; it’s still in regular service on the farm. 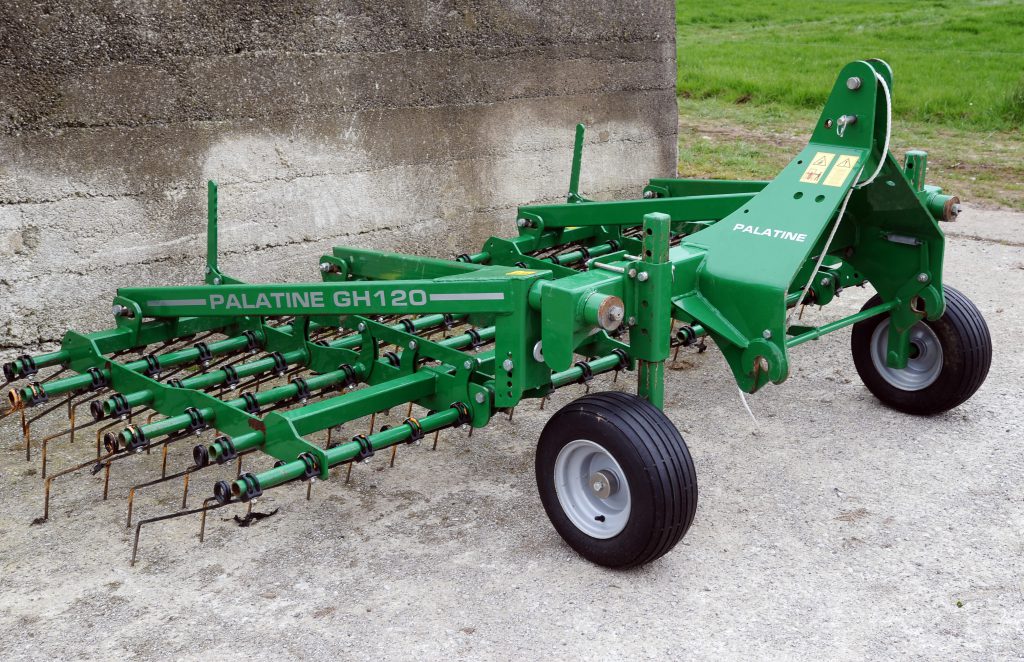 Three years later he is satisfied enough that the production version is as he would wish. Having sold a good number already – with few, if any, problems – he now sees their manufacture as a viable full-time business. 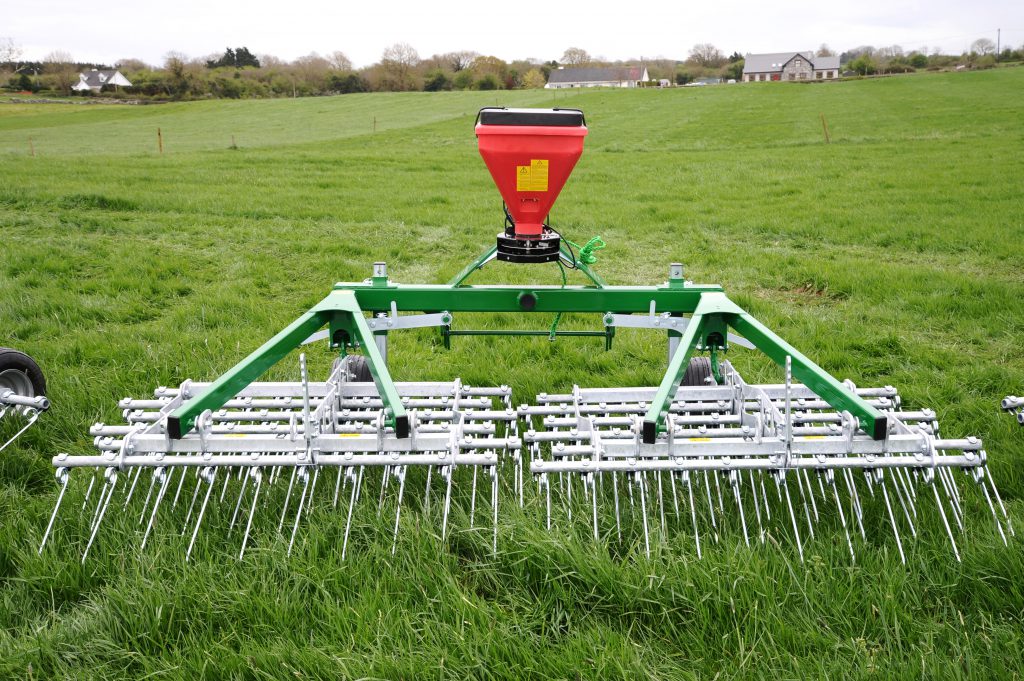 Bringing a product to market is not a job for the faint-hearted. A great deal of resolve and energy is needed to ensure that the instruction manuals, insurance, CE mark approval and so on are all in place before a machine is actually sold.

“It amazes me how many companies don’t have a CE mark on their machines. I look for them at shows and even some well-known brands don’t put them on certain models,” said Ken.

Having had to previously prepare paperwork for companies such as McHale and Samco, he is well versed in the process. He is determined that not only will his machines be fit for sale, but they are seen to be so as well. 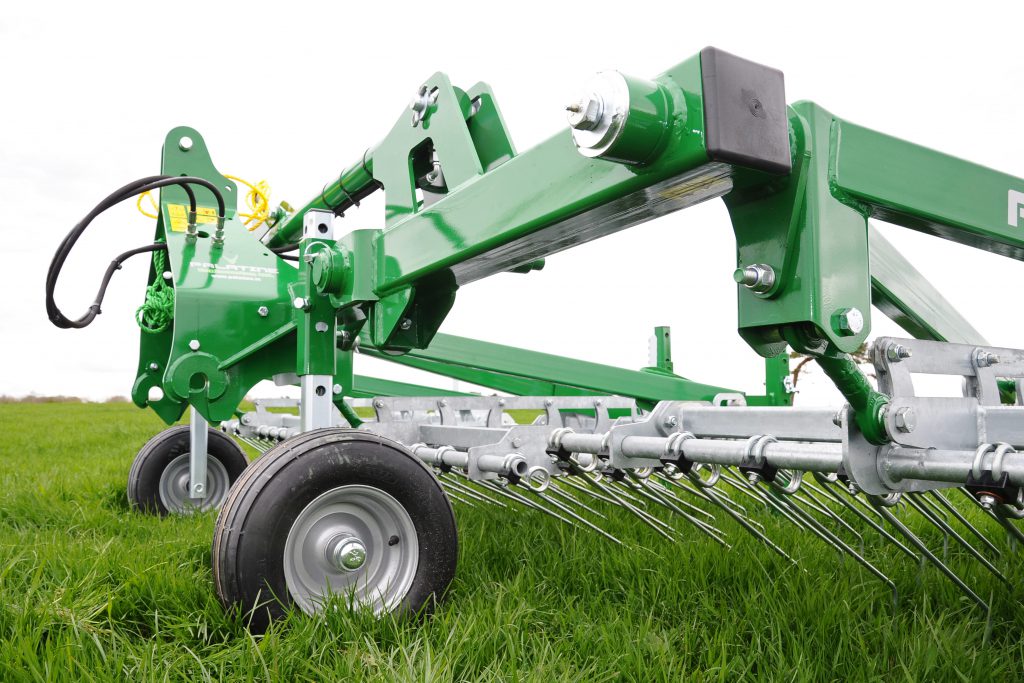 Such a professional attitude comes through spending over 20 years studying and working in an engineering environment. He started his education in the subject at Tralee, before moving over to Silsoe College in Bedfordshire (England).

As part of the degree course, he spent a year demonstrating Dowdeswell ploughs before moving back to Ireland and taking up a position in the research and development department at McHale.

Being the junior there I was given all the odd jobs that nobody else wanted. It was great; I learnt a lot.

With several years manufacturing experience under his belt he moved back down to Samco Manufacturing in Co. Limerick for a while, before joining a more general engineering company in Limerick city itself.

The very first unit was designed with a 3D CAD (Computer Aided Design) programme and he has not strayed since. 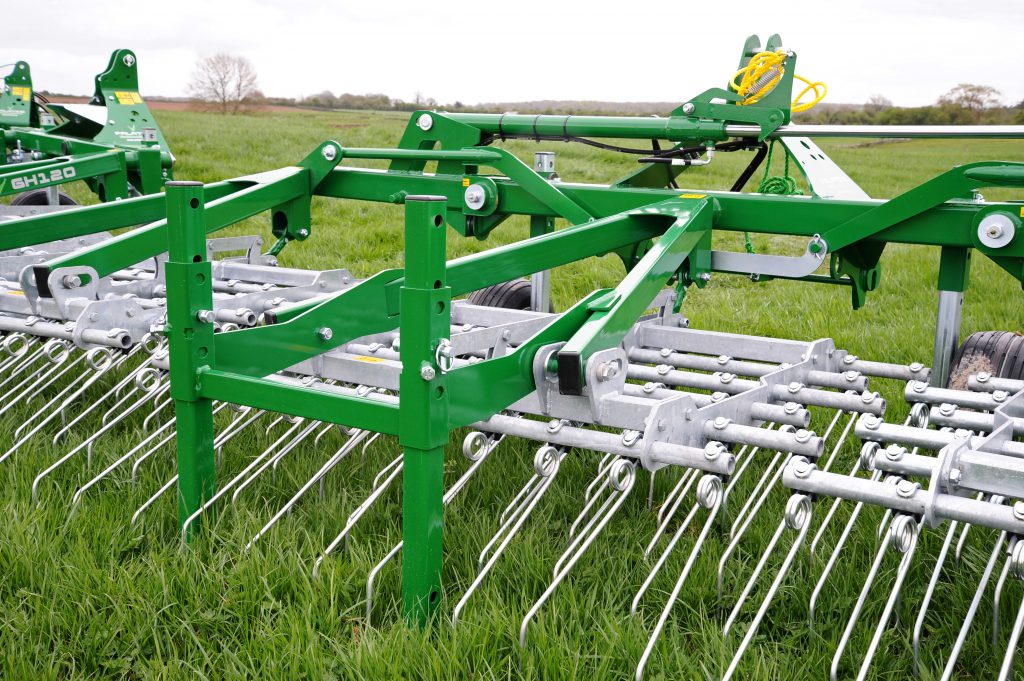 “The old-school method of welding up a new machine from bits of steel on the factory floor still exists in some companies, but that really shouldn’t happen nowadays.”

However, the computer has not got all the answers. “CAD will get you most of the way, but field-testing is still essential. There will always be something you missed on the screen.”

The difference in approach shows in the way the implements are put together. The harrows are all modular, based around a standard bank of 60 tines (which is 1.5m wide). The headstocks and ‘A’ frames are the same on each model and the link between the frame and the tine bank is also identical. 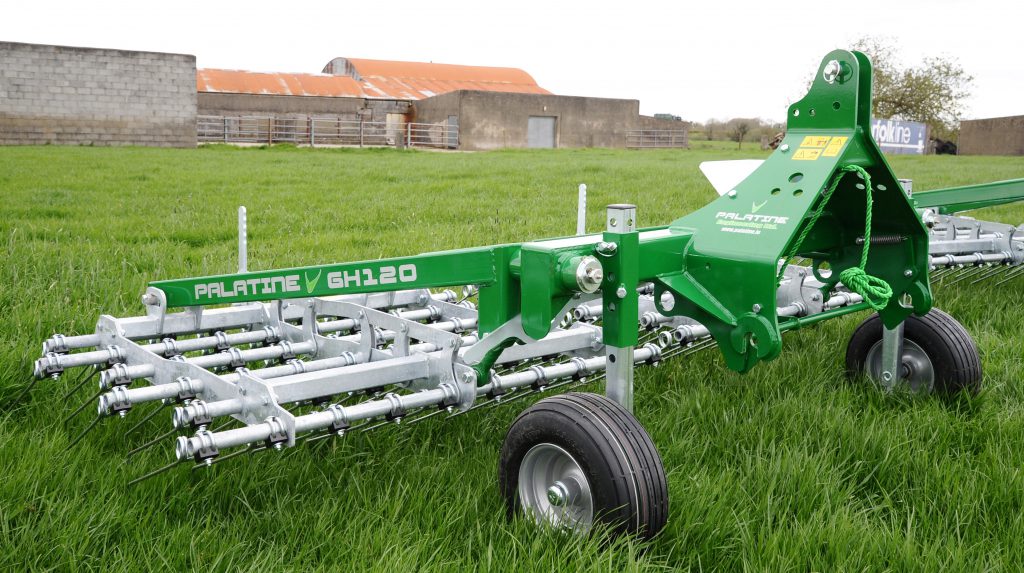 Ken stresses that it is this component, which he calls the ‘Terralink’, that is critical to how well the harrows work. He tried several designs before settling on the present arrangement.

The folding of the largest 6m-wide model does not follow the normal pattern of simply tipping the sections on their side. Instead, there is an ingenious, hydraulically-powered linkage that lifts each bank and ‘stacks’ it above the inner section. 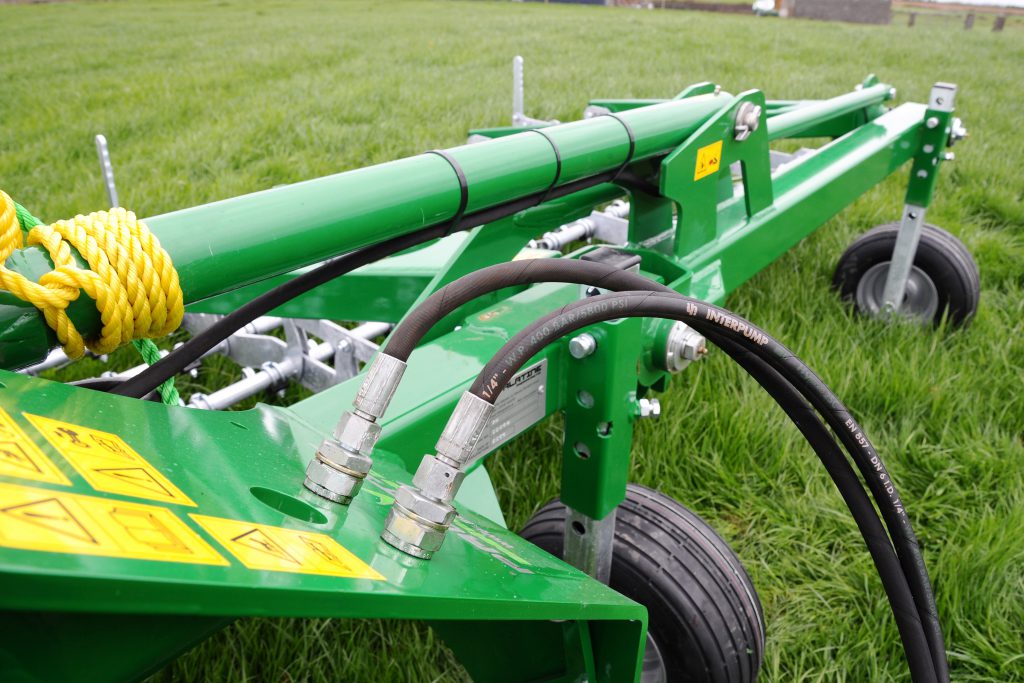 This ensures that the tines point down rather than present the hazard of pointing outwards. The system will work with a seed spinner attached, but not with the optional air seeder – which requires the more traditional form of stowage for transport. 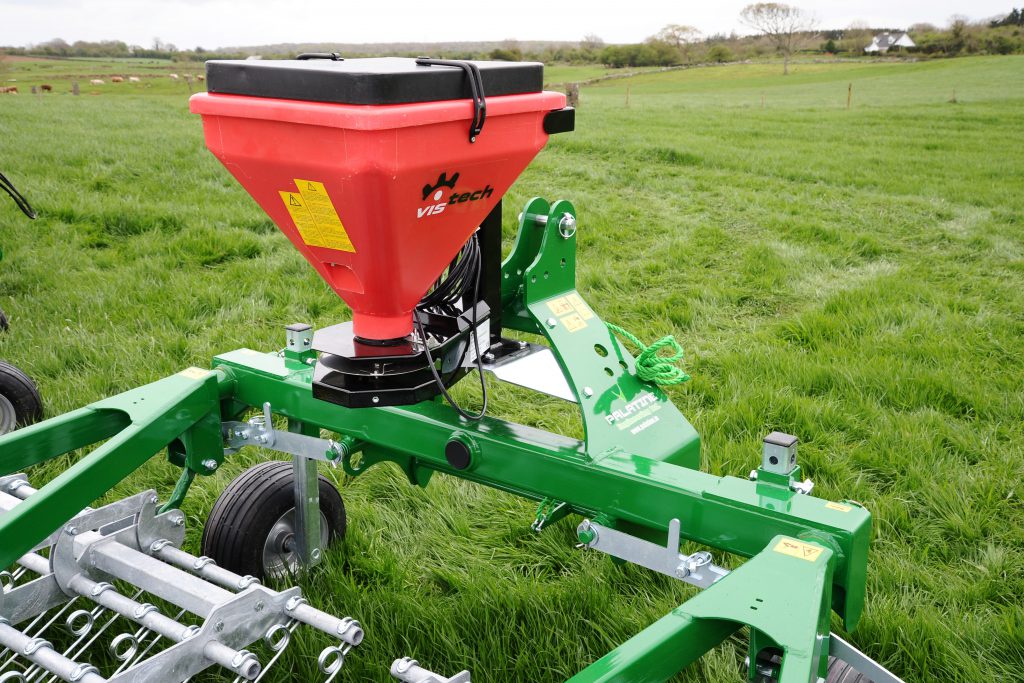 Presently, Palatine Engineering is working from a modest workshop in which the machines are painted and assembled in jigs of Ken’s own design and construction.

He will only buy components from known and trusted suppliers, pointing out that you can never be certain of the quality when purchasing blind from eastern sources. 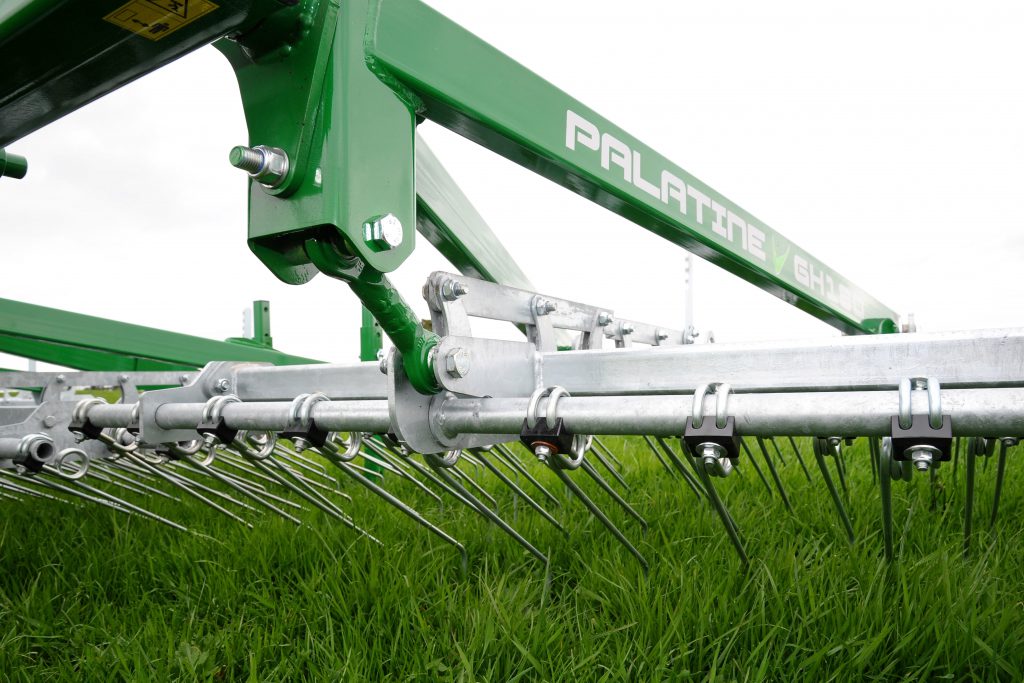 The grass harrows are the first products from his new company. He will admit to there being more implements of interest to livestock farmers in the pipeline, but will say no more for the time being. 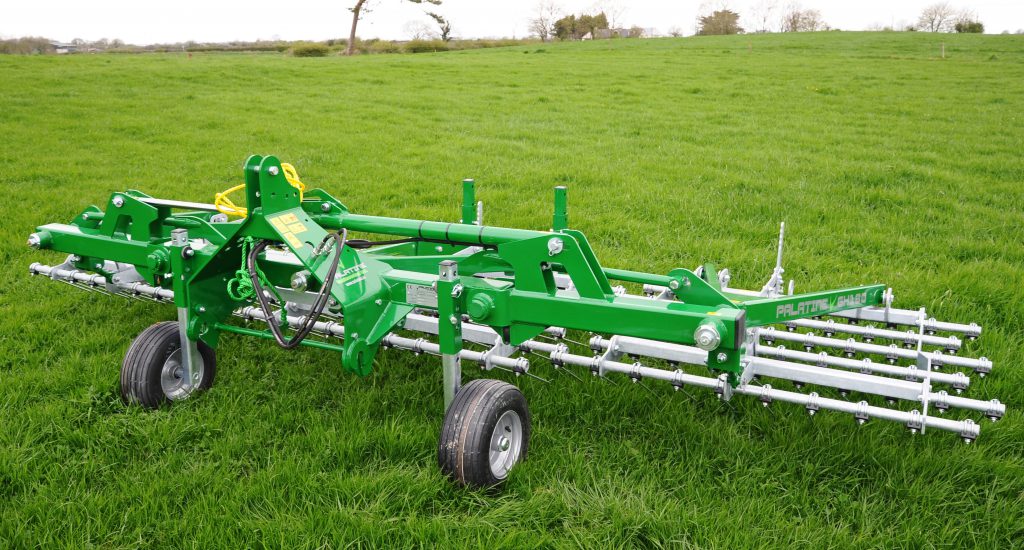 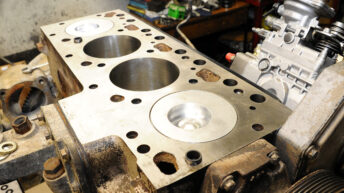