Tractor crash chaos in Tipperary, no one injured says Gardai 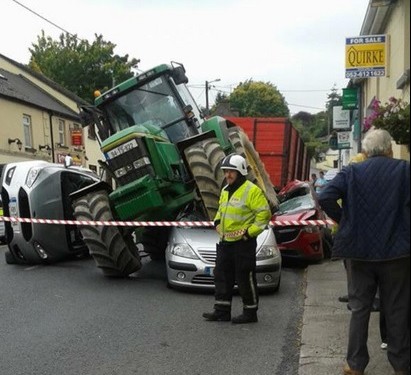 A tractor and trailer went out of control yesterday (September 10) in Tipperary and crashed into four parked cars, luckily no one was injured.

The accident happened around 10.30am on Main Street Ardfinnan in Co. Tipperary and it is reported that the tractor went out of control on Ardfinnan hill.

A Garda spokesperson said that the out of control tractor crashed into four parked cars, which were empty at the time.

The driver of the tractor, a male in his early sixties, was also uninjured in the accident.

The accident is under investigation by the Gardai.

Nigel Carrigan tweeted pictures of the scene saying that it was a miracle that no one was hurt.

@JOEdotie fun in the village of ardfinnan this morning. Apparently brakes failed in tractor. No one hurt thankfully pic.twitter.com/MjiaOHgcxM

While the Gardai are still investigating the accident it will most likely be a number of weeks before the cause of the accident is known.

Carrigan said on Twitter that apparently brakes failed in the tractor, that no one was hurt and that it is normally a busy road.

As can be seen from Carrigan’s images, it really is a miracle no one was hurt in the accident as the cars were pushed down the street and crushed.