There will be very wet weather over Munster and Connacht this morning (Friday) with some heavy and locally thundery falls of rain and some flooding, Met Eireann has said.

A mainly dry start elsewhere it said, but some rain developing later this morning, becoming heavy and widespread in the afternoon and evening.

Accumulations of 35 to 50mm are likely. On high ground and mountain in coastal counties, amounts of 60 to 70mm are possible, it said.

The status yellow warning has also been extended to 6.00am on Saturday for Leinster and northern counties with accumulations of up to 35mm likely.

Today (Friday) will be cool and breezy, with top temperatures of 14 to 17 degrees Celsius while fresh and gusty southeasterly winds, will veer northwesterly on west and southwest coasts later, it said.

There will be widespread rain early tonight (Friday) and it will be thundery in places with some further local flooding, according to Met Eireann.

However, drier conditions will develop over Munster, Connacht and west Leinster by dawn on Saturday. 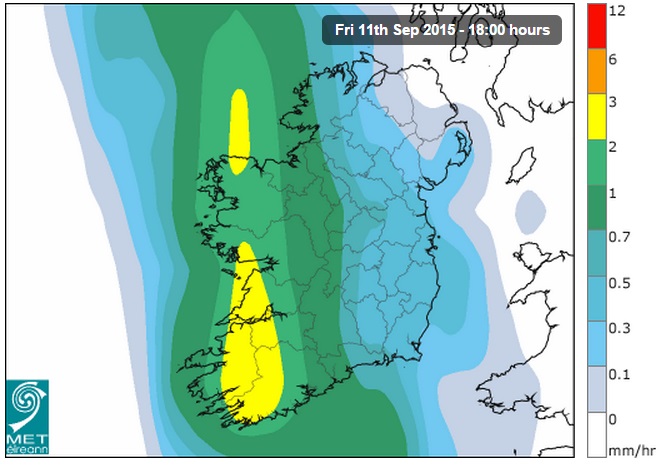 The current forecast of rain for Friday evening

Looking to tomorrow (Saturday) remaining rain over Ulster and east Leinster should soon clear, so that much of Saturday will be bright and fresh, with sunny spells and occasional passing showers, it said.

There will be top temperatures of 13 to 16 degrees on Saturday, it said.

Saturday night will be cool and misty, with fog in places and any showers well scattered and light, it said. However, Met Eireann said that later in the night, more rain will develop over south and west Munster.

Rain will become widespread over the country on Sunday morning with heavier falls expected over parts of Munster and Connacht.

Top temperatures will be between 13 and 16 degrees. Rain will continue overnight and it will be heavy in places with some further local flooding possible, it said.

Looking to next week, Met Eireann said there will be further showers or longer spells of rain during Monday and it will be heavy in places.

It will be another cool day, with highs of 12 to 15 degrees, in a moderate to fresh mainly easterly breeze.

It will dry out overnight with patches of mist and fog developing, it said.

Highs of 14 to 16 degrees are expected in moderate variable breezes however, rain may well return to southern coastal counties overnight, it said.

Wednesday will be a wet day with some heavy rain in places and it said it will be breezy also with fresh and gusty southeasterly winds.

It's official - we had no summer! Met Eireann says it was 'wet and windy'

Met Eireann confirms Ireland would be a great little country...if you could only roof it