The cumulative throughput of sheep at export plants has dropped by almost 10,000 head, figures from the Department of Agriculture show.

However, total throughput remains unchanged on a percentage basis as the total kill sits at 2.3m head.

There has also been a 13% reduction in the total cast ewe and ram kill, with 40,132 fewer of these animals going to meat export plants in 2015 compared to the same period in 2014, with a good trade for these lots in the country’s marts.

Figures from the Department of Agriculture also show that the total number of light lambs slaughtered has also fallen by 1,587 and stands at 1,092 to date in 2015. 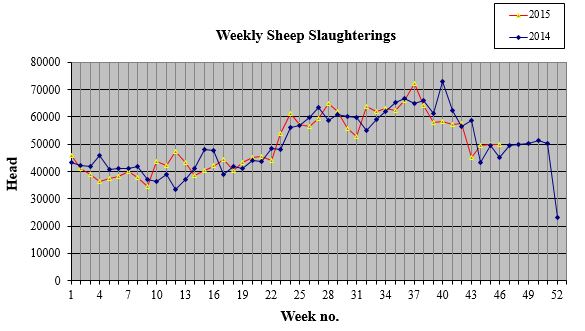 Last week’s national sheep kill currently sits at 50,091, figures from the Department of Agriculture show, this is an increase of 1% from the week ending November 15, 2015.

Spring lamb throughput has increased by 955 head on previous week’s and stood at 43,265, this is a rise of 2%, with good demand for these lots in factories.

Figures from the Department of Agriculture also show that there were 59 hoggets slaughtered last week, which is a fall of 44 from the week ending November 15.

There has been a 4% reduction in the cast ewe and ram slaughterings this is a week-to-week drop of 283 head.

Good demand for all lots in the country’s sheep marts

Cast ewes remain in strong demand with the best of these lots making €114 and according to mart managers, there is good demand for these lots with plenty of buyers around the ring.

The lighter feeding ewes are also meeting a firm demand with the hammer falling on these lots from €50-78.

According to mart managers, the store market is still being driven by farmers with these lots selling from €2.03-2.35/kg.