Cast ewes remain in strong demand with the best of these lots making €114 and, according to mart managers, there is good demand for these lots with plenty of buyers around the ring.

The lighter feeding ewes are also meeting a firm demand with the hammer falling on these lots from €50-78.

According to mart managers, the store market is still being driven by farmers with these lots selling from €2.03-2.35/kg. 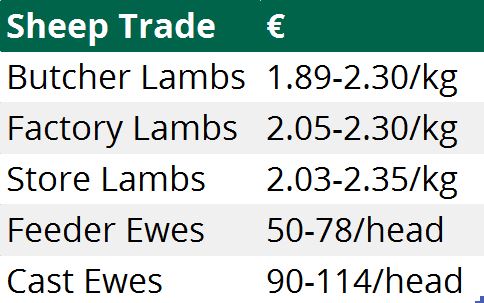 The number of sheep coming forward to Kilkenny Mart are remaining scarce, and this is resulting in a solid trade all round, according to the Mart Manager Michael Lynch.

According to the Mart Manager, the top call for the cast ewe lots was €114/head, but these lots generally made €40-115 each.

There was a brisk trade for finished lambs in Roscommon Mart on Wednesday, according to the Mart Manager Maura Quigley.

According to Quigley, the numbers passing through the ring were similar to previous week’s levels, but the best of the finished lambs fetched up to €60 over.

There was a strong demand for factory and butcher type lambs and this was reflected in the price with these lots making €2.07-2.21/kg and €1.89-2.19/kg respectively.

She added that there was also a better trade for lighter lambs with a full clearance for all lots, with the hammer falling on these lots from €2.03-2.15/kg.

The Mart Manager added that the average price for cast ewes had improved on previous weeks and these lots traded at €62-112.50 each.

There was a much-improved sheep sale in Headford Mart on Saturday, according to the Mart Manager Joe Wynne.

According to Wynne, the factory and butcher lambs had improved by €2-3/head on previous weeks and these lots made €90-100 and €95-105 respectively.

He added that the trade for store lambs continues to remain strong with the hammer falling on these lots from €68-90 while ewe lambs made €90-108.

Cast ewes also remain in demand in the Co. Galway venue and these lots traded from €50/head for the plainer feeder types to €90 for the fleshed factory fit ewes.

There was a larger number of lambs on offer in Mountbellew Mart on Saturday, according to the Mart Manager Marianne Higgins.

According to Higgins, the lambs on offer met with a strong trade with prices for factory and store lambs up by €5-8/head on the previous week.

There was also an improved trade for the small number of ewes that passed through the ring, this was especially the case for the fleshed types and the hammer fell on these lots from €78-125 each.