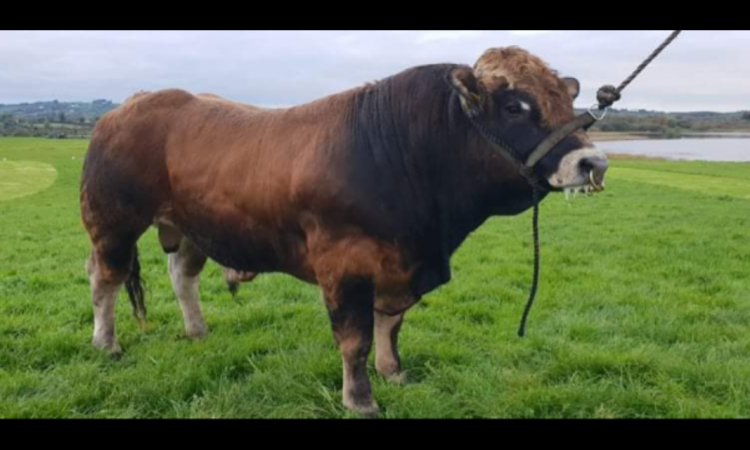 As Level 5 restrictions were imposed, online bidding was the only means for customers to purchase animals on the day.

The sale starting time suffered a two-hour delay on Saturday due to the mart being one of several that suffered from the LSL Auctions online selling platform server experiencing technical difficulties. A number of customers who had registered with the mart earlier on the day of the sale had to re-register because of the system error.

The sale began at 3:00pm following apologies from both Tullamore Mart and auctioneer Tom Cox on behalf of the system failure.

The overall trade on the day for bulls was very difficult, although a top price of €4,350 was achieved; only five out of the 13 males presented for sale found new homes. The average selling price for males amounted to €2,730.

The chairman of the Irish Aubrac Cattle Breed Society, James Donnelly, stated: “The trade was good for quality breeding females; it was great to see a number of them making in excess of €2,000.

The bull trade, apart from the one exceptional price, showed that obviously farmers are waiting for the spring time to purchase their bulls, even though there were some very nice bulls there for farmers to buy.

“Considering the whole mart system was in chaos, caused by the online platform being down, the fact that people waited around and bought was a great relief.”

Selling at €4,350, was the May-2019 born Ashbrook Othello (pictured above) exhibited by Michael Halon from Dring, Co. Longford. Sired by Dauphin and having sires such as Roussei and Tenor in his maternal back pedigree, Othello has an impressive Replacement Index value of €194. He also has a terminal index value of €121, alongside a calving ease value of 1.7% on matings with beef cows.

Othello‘s price tag is understood to be the highest price achieved by a pedigree, Irish-bred, Aubrac bull brought to auction.

Michael Halon’s bulls continued to top the male trade with Ashbrook Oscar and Ashbrook Obama selling for €2,700 and €2,600, respectively. These May-2019 born bulls are both sired by Johnstown Ian 1039, who was a participant of the ‘Gene Ireland Maternal Breeding Programme’. Both bulls failed to meet their reserves in the ring, however, they were subsequently sold outside after the sale.

Other leading prices in the male section included:

The trade was positive for females with more animals trading hands, in comparison to the bulls. In-calf heifers averaged €1,870, while maiden heifers sold for an average of €1,990. The weanling heifers on the day sold for an average price of €1,625. Overall, a clearance rate of 93% was achieved for the females.

Topping the female sales at €2,600 was a nine-year-old cow, Ballinclea Giselle, exhibited by Sonny and Margaret Jennings from Tuam, Co. Galway. This February-2011 born female sold after being scanned four months in-calf to Turloughmore Master. Sired by Merville Brutus, this cow sold with an impressive Replacement Index value of €237.

Following close behind with a price tag of €2,550 was Banner Niki, she sold with an August-born calf at foot sired by Deerpark Kevin. The February 2018 born Niki was sired by Clonkett Louis and was exhibited by Rory Killeen from Ennis in Co. Clare. Sires such as Roussi and Boubal Pastour were also in the dam’s pedigree.

Bernard Casey, from Drumlish, Co. Longford, sold Cairn Hill Orlaith (pictured above) for a price of €2,500. This 17-month-old heifer was sired by Cairn Hill Gully and sold with a Replacement Index value of €156, giving her a 4-star rating within the breed and 5-star rating across all breeds.

After some long drawn out online bidding, Johnstown Oceana 1572 was hammered down by auctioneer Tom Cox for €2,400. This Invincible sired-heifer was shown by Francis Donohoe from Collinstown, Co. Westmeath. Born in January 2019, this heifer sold with a Replacement Index value of €155.

John Walsh from Ballintra, Co. Donegal, sold his 17-month-old heifer, Ballintra Orsola, for a final call of €2,400. This heifer was sired by Caporal and out of his home-bred dam, Ballintra Faye, who was sired by Delrieu Frezat.

Other leading prices in the female section included: 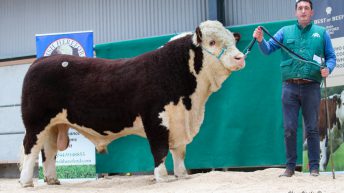