In the space of 20 years, the number of farmers growing cover crops in this country has increased almost 20 fold. Cover crops now take up the fourth largest cropping area.

One of the advocates for the growing of cover crops in this period of time has been John Geraghty – a lecturer in Land Management in Waterford Institute of Technology (WIT).

Speaking at the Drummonds’ Soil Cultivation Day, John explained the benefits of these crops and gave some advice on what to grow and how to manage these crops. 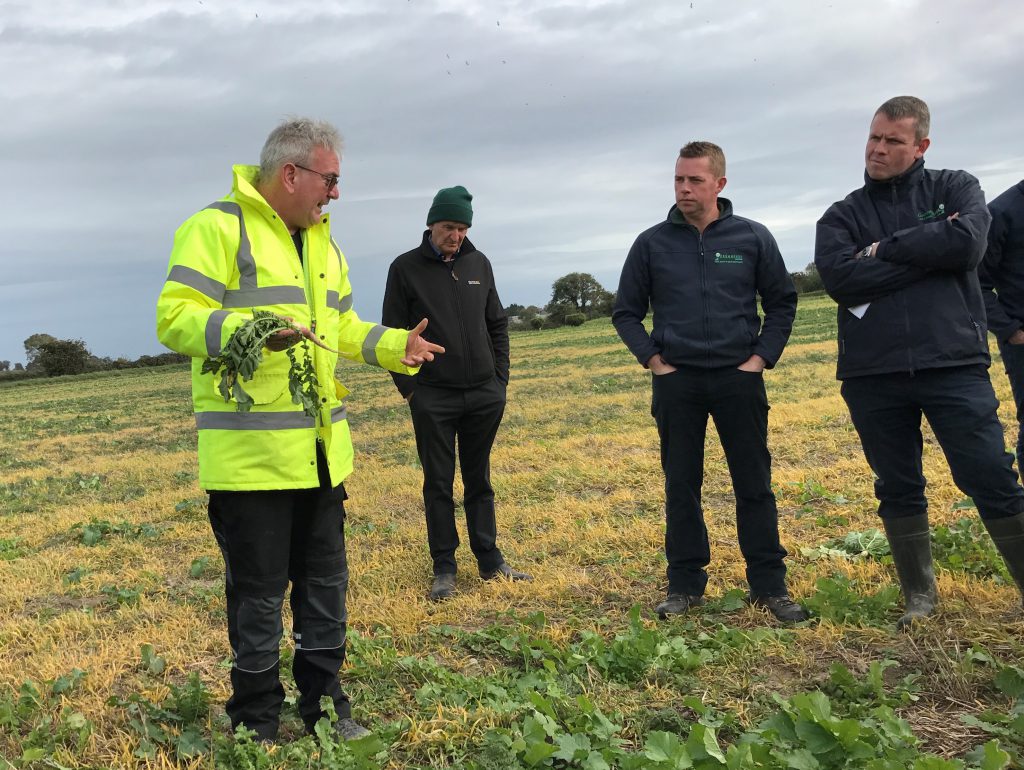 He also explained that the introduction of support payments to grow these crops in REPS (Rural Environmental Protection Scheme), AEOS (Agri-Environment Options Scheme) and GLAS (Green Low-Carbon Agri-Environment Scheme) schemes was a turning point in increasing the acreage grown.

There were never more than 90 farmers that participated in the REPS or AEOS schemes that selected the cover crop option.

It’s the fourth largest area of crops being grown in the country.

“It shows you the impact that GLAS one, two and three had in terms of getting farmers to adopt; part of the reason is that the payment is now €155/ha,” John added. 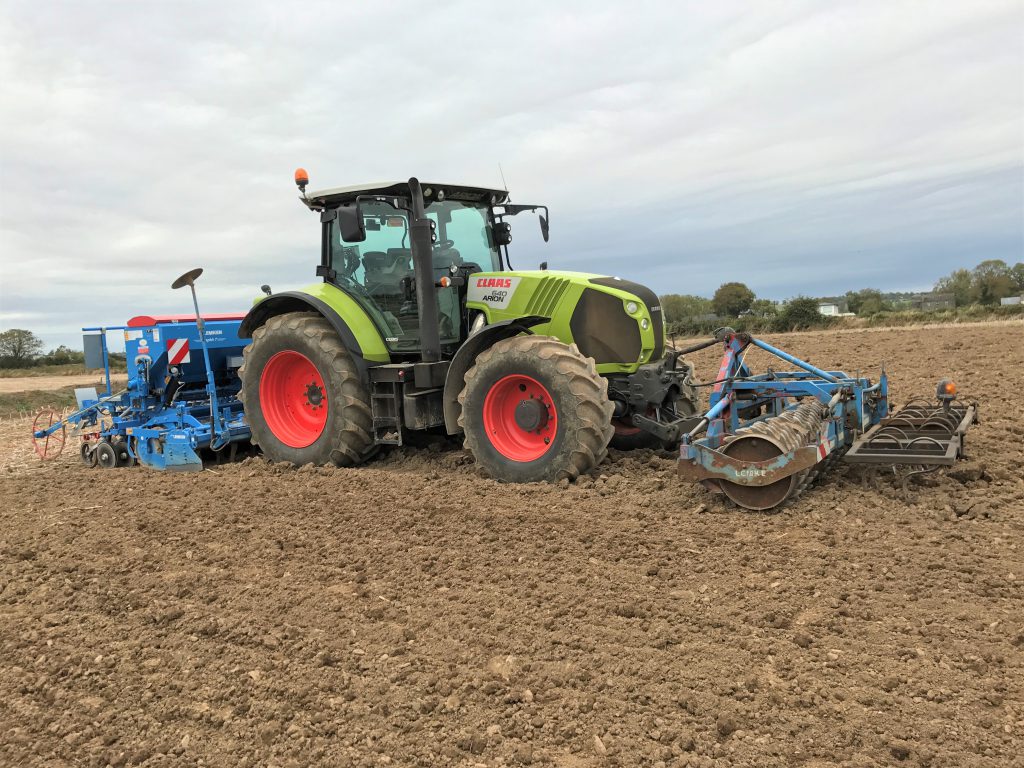 There was a large amount of machinery demonstrated on the day. This one-pass was accompanied by mainly discs, stubble cultivators and min-till equipment

Brian Reilly – trial site manager at Drummonds – sowed three different mixes of cover crops at different seed rates. He used a stubble cultivator to rip the ground and spread the seed from a quad; the soil was then rolled.

The crops were sown on July 20 and the first mix that John looked at was tillage radish, forage rape and phacelia. All of the crops received a graminicide (Falcon at 0.6l/ha) 14-15 days before AgriLand visited the trial site.

John said it was the right decision to spray the volunteer cereals.

“The last thing you want is to leave them to develop too much. There was rynchosporium and net blotch on the leaves of the volunteer barley and there is a strong likelihood that aphids will carry BYDV from affected fields where you’re growing cover crops into a field where you’re just after sowing winter barley.”

John described the mixtures and establishment methods on the Drummonds’ trial site as “perfect”.

John explained the importance of protecting the soil by growing these cover crops.

It’s a precious resource and we need to cover it; we should never really leave soil bare if at all possible. 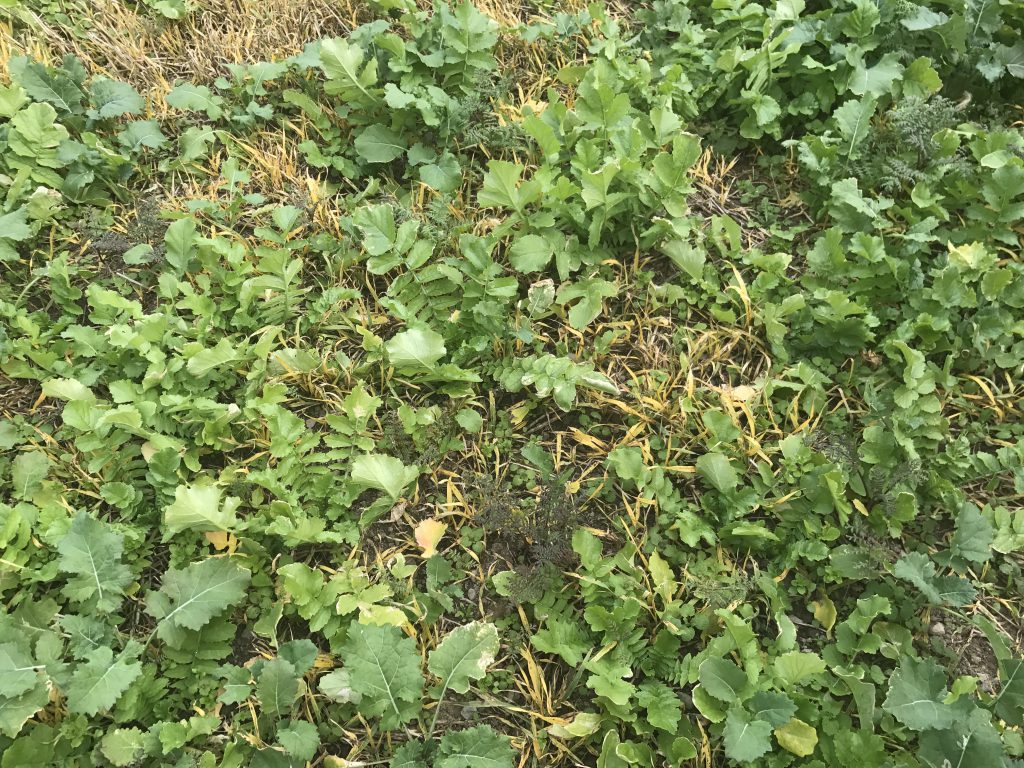 “You need to understand a bit about the individual plants to make the best choice for yourself on your farm and that’s really, really important,” John explained.

“Ideally, the Department of Agriculture encourage you to have a mix of a grass species with a broad-leaved species in your cover crop mix, but you can grow two broad-leaved plant species if you want.

“Grasses actually generally take up less nitrate than the broad leaves. Cover crop trials conducted in Oak Park between 2003 and 2005 looked at benefits associated with growing mustard, phacelia and oats.

“Oats are cheap and cheerful for farmers – they’re fantastic, but they actually took up about 60% less nitrate than the mustard did.

“By just growing mustard in between spring barley crops, the actual take up of nitrogen (N) was the equivalent of about 1.5 bags of CAN/ac – the amount of N in the soil that the mustard hoovered up.

You’ll get that back slowly as the mustard dies back in the soil, releasing the nutrients that it’s after taking up.

“Fertiliser is expensive enough, so it doesn’t make sense to me to spend money on fertiliser and to lose phosphate or nitrate out of the field – during wet weather conditions – when you’re after spending this money. We need to try and harness and pull all of this together.” 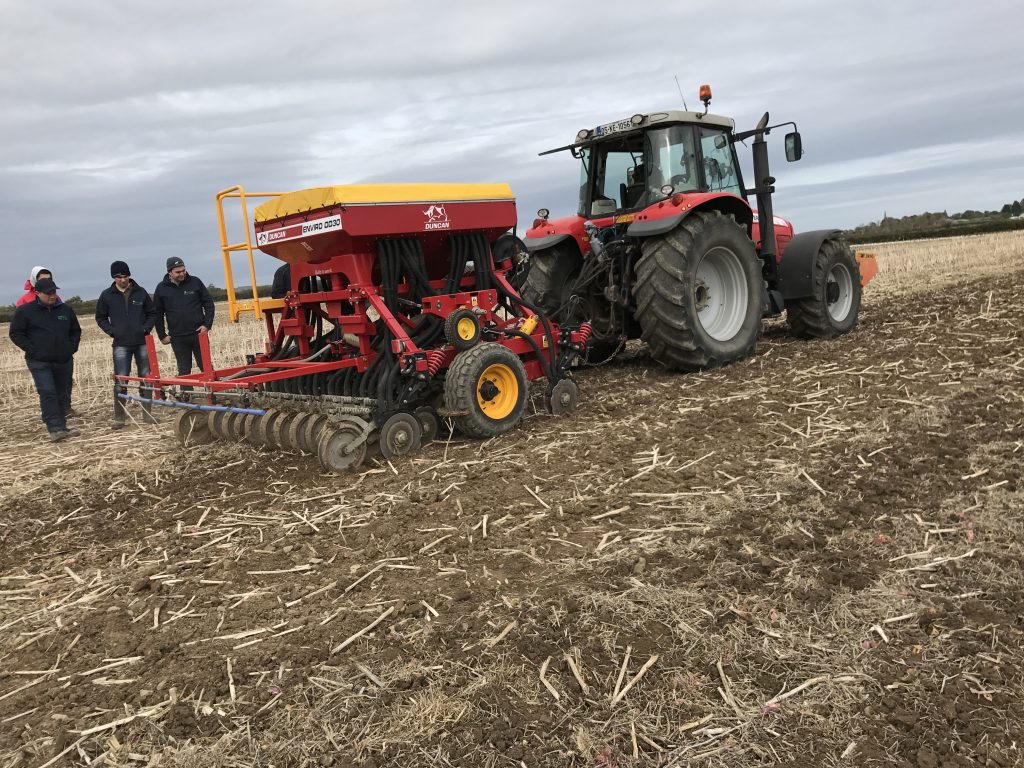 This Duncan drill was one of the machines on show at the Drummonds’ Soil Cultivation Day. It had dribble bars fitted to the back of the drill

“If you’re growing cover crops you have to take account of certain things – your rainfall, your climate and maybe your soil type.

“Some farmers got caught out because they selected cover-crop mixes that had a lot of summer crops in them and they were going into winter situations. Phacelia and tillage radish are summer plants – they grow best during the summer period.

If you plant these into wet, cold ground you might not get germination of the seed. So, they will turn off because the conditions aren’t good. 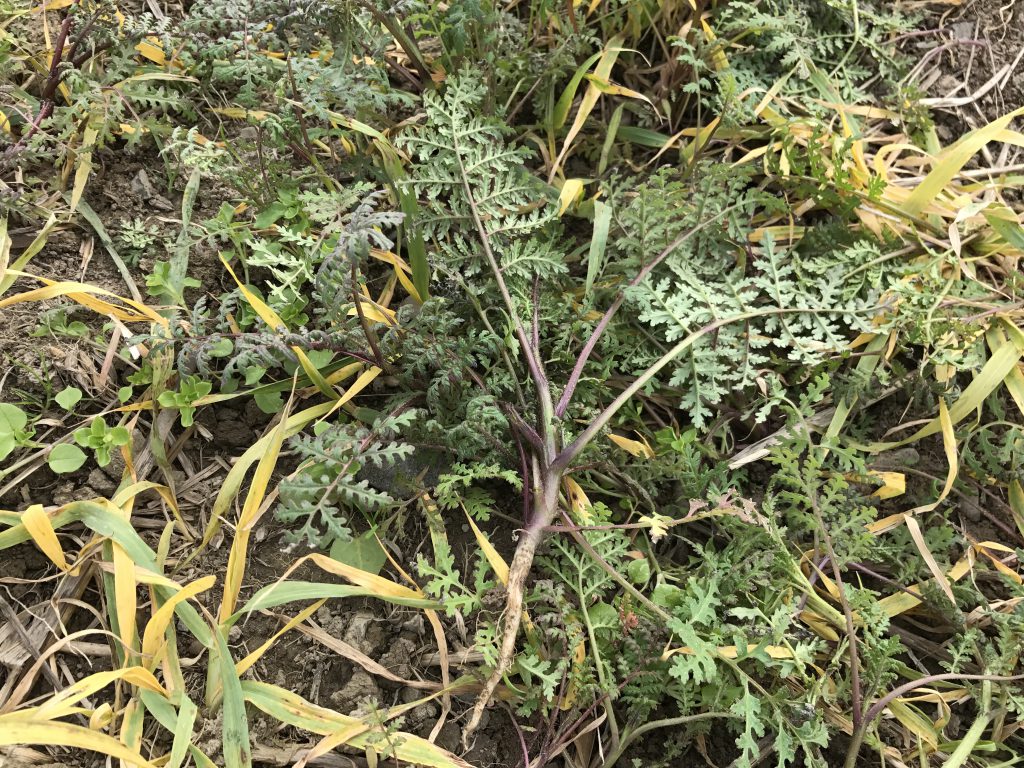 Phacelia has a small tap root, but grows a dense lateral root structure

John continued by describing how these plants will then start to grow when the soil warms up again in the springtime.

“The good thing about these summer plants is that if we have an inclement winter – a lot of frost and cold conditions – it will kill them off, so we don’t need to terminate the crop.

While warmer weather and soil temperatures facilitated the establishment of these plants this year, it is something to be aware of in the future. Crops like forage rape are ideal in temperate climates like Ireland.

Cover crops with a large tap root are ideal for breaking through the soil.

“One of the reasons why you would use tillage radish is that it grows a big tap root and a few lateral roots. It’s fantastic at breaking compaction.

“It’s very good if you’ve got compacted soil and it’s used in a lot of regions around the world. The big healthy tap root drives down into the ground,” John noted.

“You get a really dense root mass coming out from phacelia lateral roots.

There isn’t a cultivator or a piece of cultivation equipment that has been designed by man that will do that type of soil movement for you. You’re adding structure to the soil, which is really, really important. 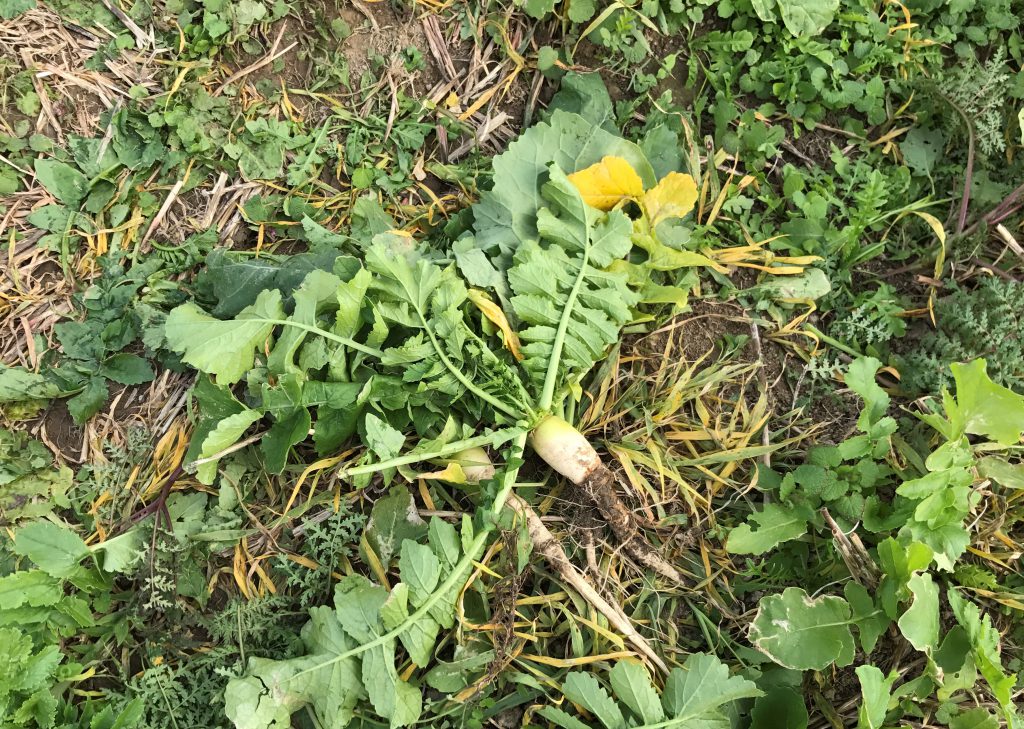 Planting after a cover crop

“If we’re using winter species like forage rape and not grazing it, then the crop will have to be terminated. This brings up an agronomic dilemma; do you terminate the crop six weeks before you’re scheduled to sow your spring crop? Or, do you do it eight weeks before, or very soon before you’re going to sow?

It really depends on the type of system that you’re operating; if you have a disc drill and you’re doing strip tillage or no tillage, you can literally come in and drill your crop into a cover crop.

“You can spray off with a low rate of glyphosate before you go in; that will control your cover crop.

“It’s only in certain instances that you can terminate a cover crop mechanically with a disc. If it’s gone to flower you can do that, but, if it’s in the vegetative stage and you disc it into the ground, there is the possibility of vegetative propagation and regrowth,” John added. 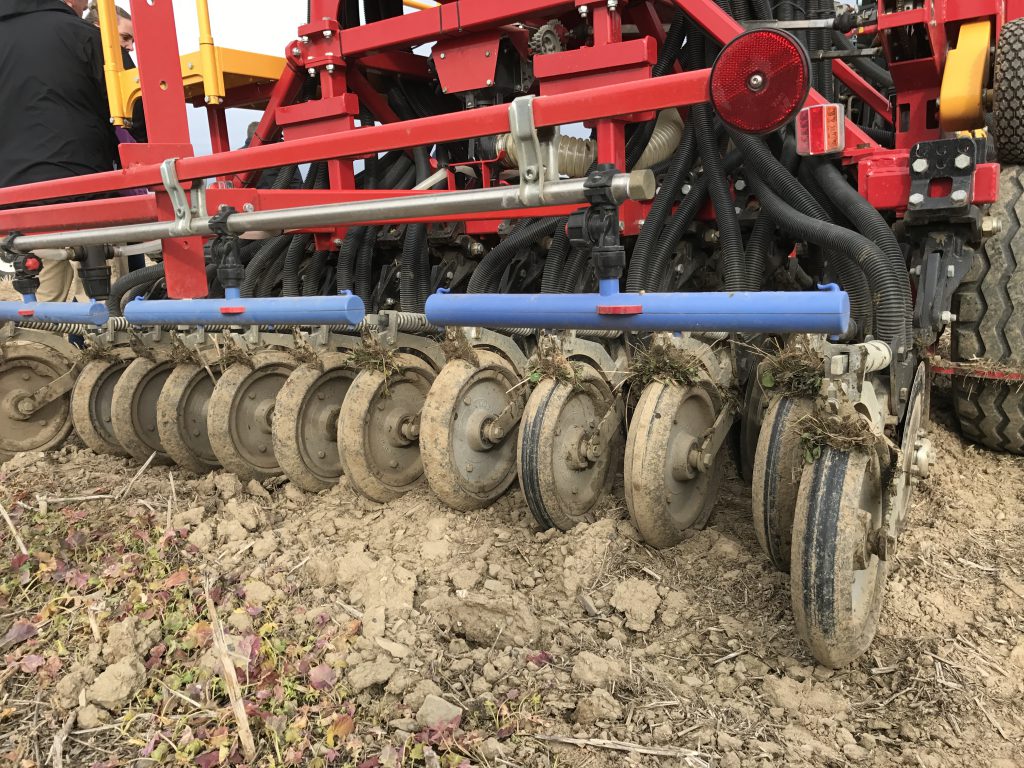 Dribble bars on the back of the Duncan drill

While John is a strong advocate for cover crops and described the benefits from a soil health, soil management and water quality point of view, as well as the biodiversity these crops create that can help to fight against disease, weeds and pests, he is also a realist.

He stated that, if you go back five years or more, on average, between 75% and 80% of income on tillage farms is via schemes – the BPS (Basic Payment Scheme), GLAS, and the recent Forage Incentive Measure.

It’s very important to maximise the payments that you get from these schemes and – at the same time – do the best job that you possibly can do in terms of managing your soil; it’s your primary resource. 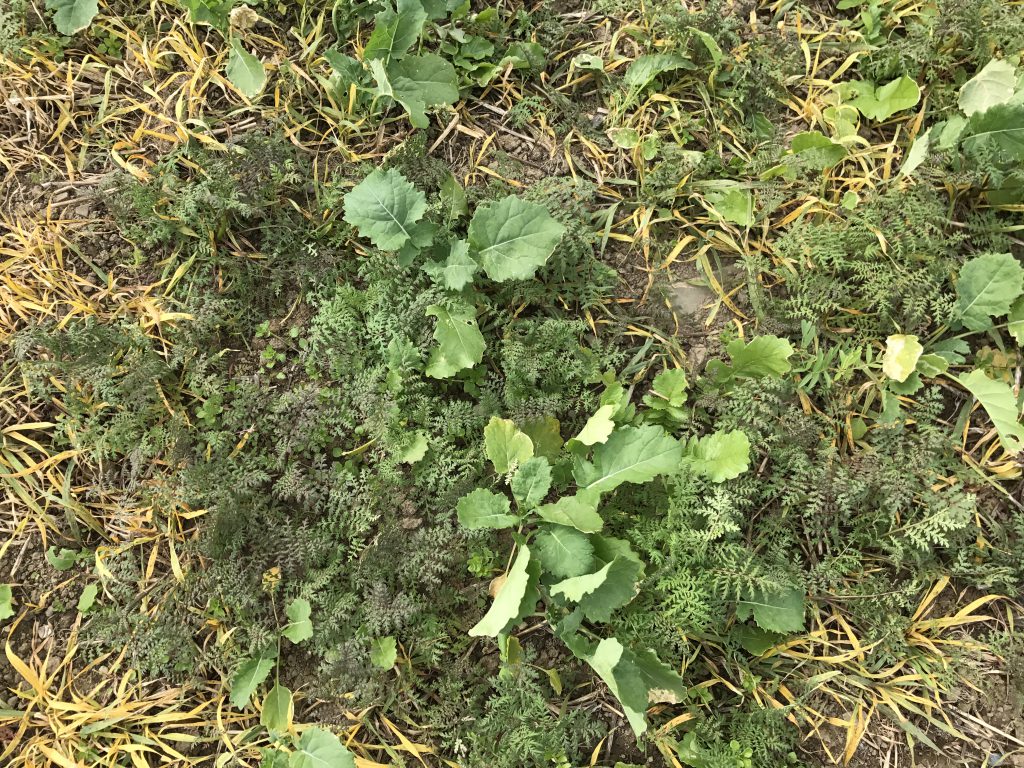 He promoted the grazing of these forage crops when the growing period was complete. He explained that this can give a side income along with the €155/ha. However, he did emphasise the use of small animals for grazing.

“You can graze the ground from December 1 onwards. Use light animals, not heavy animals; if you use heavy animals – 500kg or more – they’re going to muck up the soil on you again.

“It’s very important because you can recycle nutrients again. Those animals are going to urinate and produce dung. That’s all part of organic matter that’s going to feed your soil and your system again,” John added. 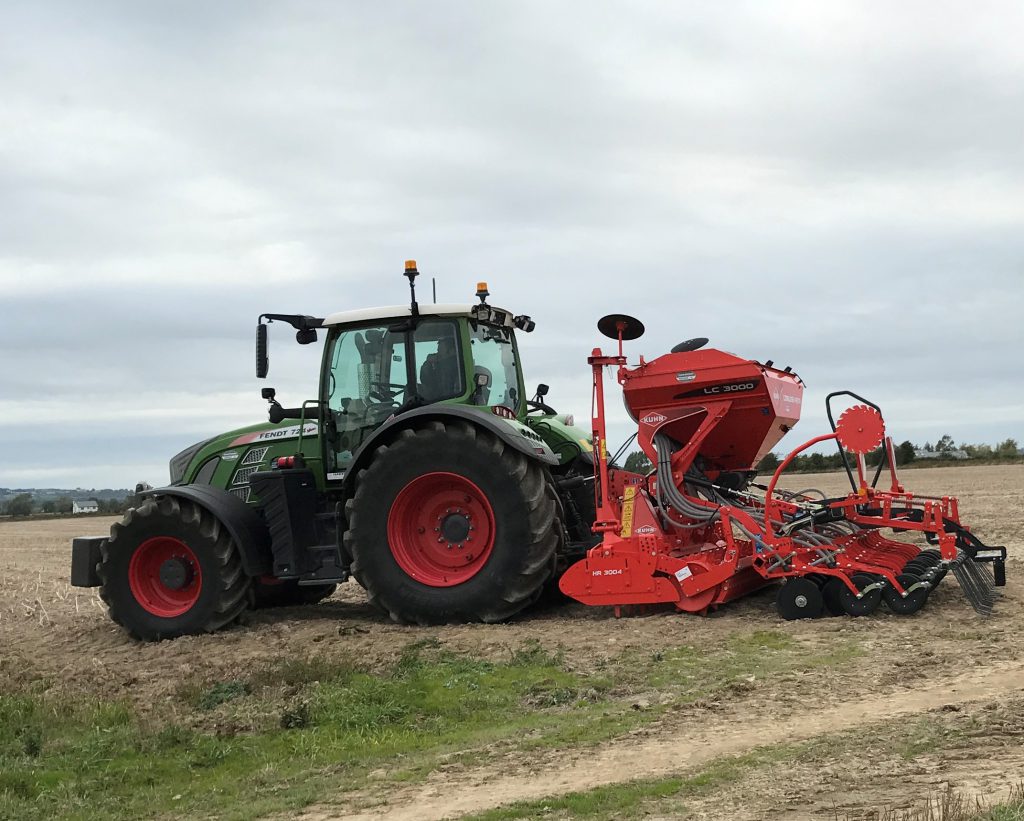 This new Kuhn Drill was on display