Although farmers flocked to Tullamore, Co. Offaly, for last week’s National Ploughing Championships, the mass journey had little or no impact on sheep slaughterings in export approved sheepmeat plants.

Figures from the Department of Agriculture show that some 67,458 sheep were processed last week (week ending September 23) – a drop of only 2,761 head when compared to the previous week.

However, it’s worth noting that the previous week’s kill was strong at 70,219 head and – as last week’s drop is coming from an already strong position – it’s unlikely to have any major impact on the prices being offered by processing plants.

And, although spring lamb throughput declined by over 2,500 head during the week ending September 23, only a small decrease in cast (ewe and ram) slaughterings was observed.

Meanwhile, looking at the cumulative sheep kill for 2018 up to and including the week ending September 23, almost 2.13 million sheep were slaughtered in export approved sheepmeat plants.

Throughput increases were witnessed in the hogget and ewe and ram categories, while spring lamb numbers are running 21,640 head or 2% behind the quantities witnessed in 2017.

‘Processors use excess supply to push down prices’

The chairman of the Irish Cattle and Sheep Farmers’ Association’s (ICSA’s) sheep committee John Brooks hit out at processors for using excess supply to push down prices earlier this week.

Processors are continuing to make huge profits off the backs of sheep farmers; they have no problem forward selling lamb at much greater prices than afforded to the primary producer.

“This time of year is peak supply and factories keep looking for more supply, but as soon as it’s forthcoming, prices are pulled.”

Continuing, John said: “From the time our lambs are in the processors’ hands, everyone handling the product along the line are making profits while also benefiting from a whole raft of rights and terms and conditions that protect them.

“No such protection is available to the sheep farmers who are being squeezed to such an extent that they are producing at a loss. It is both unjust and completely unsustainable in this day and age.”

John noted that 2018 has undoubtedly been, and continues to be, the toughest year for farmers in living memory.

“It is shameful that processors are hammering hard-pressed sheep farmers with their short-term, high-profit outlook.

“Current prices of 465c/kg, and even less in some cases, are below cost of production. In essence, they don’t care who they put out of business,” he concluded. 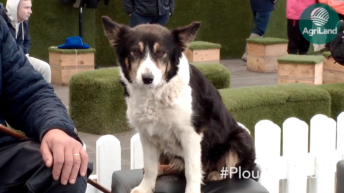 Man’s best friend: ‘You can’t sit down and talk to your quad at night’