Planting, spraying, harvesting, grading, storing, testing – Broadleas Farm has approximately 650ac of potatoes and supplies that product to Tayto Snacks all year round.

Last week Ivan Curran began emptying the last of his potato stores. Once that 1,500t has been delivered the short distance from Stamullen to Ashbourne, where it will be used in the production of Tayto snacks it will be time to start digging the early Lady Rosetta crop. This potato farm has become a highly technical operation.

Ivan’s father began planting potatoes in the 1950s and since the early 1970s the family has had a contract to supply potatoes destined for bags of Tayto crisps. 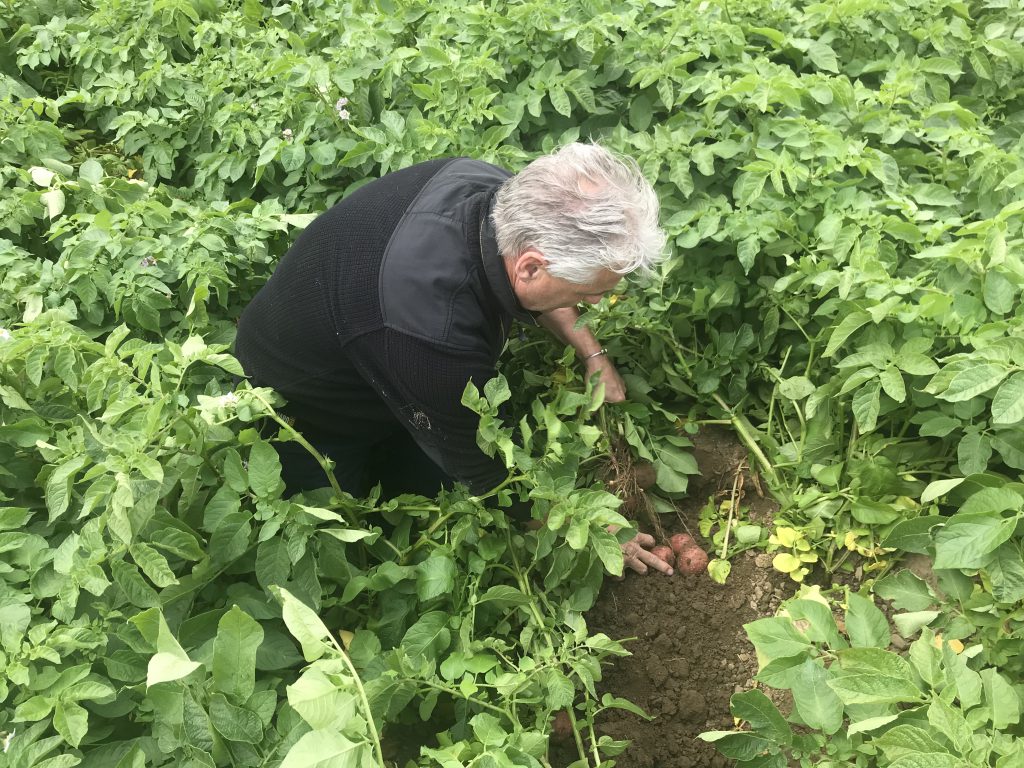 Tayto Snacks is a good news stories for a small cohort of potato growers in counties Louth, Dublin, Meath and Wexford, who supply the factory with 30,000t of potatoes annually. So, if you’re a fan you’ve probably ate crisps that originated in the fields of Stamullen and the surrounding areas that Ivan plants in.

“It’s about 80% of my potato business. We work on a contract so the whole farm is in ‘Tayto mode’. I grow some for Dunnes Stores and for Dennigans; but that’s only about 20% of my overall acreage,” Ivan explained.

The first crop to be lifted was planted in March. Planting carried on into May. Other varieties on the farm include: Lady Joe; Kibitz; Ebony; Sassy – for long-term storage – and roosters for the supermarket.

Harvest will continue until the end of October. At that time Ivan will have 5,000t of crisping product in store.

We specialise in storing. We supply off the field and we store.

Ivan explained that varieties have improved hugely in the past number of years for yield, quality and storage. He added that you can’t see the transition between different potato varieties for crisping. 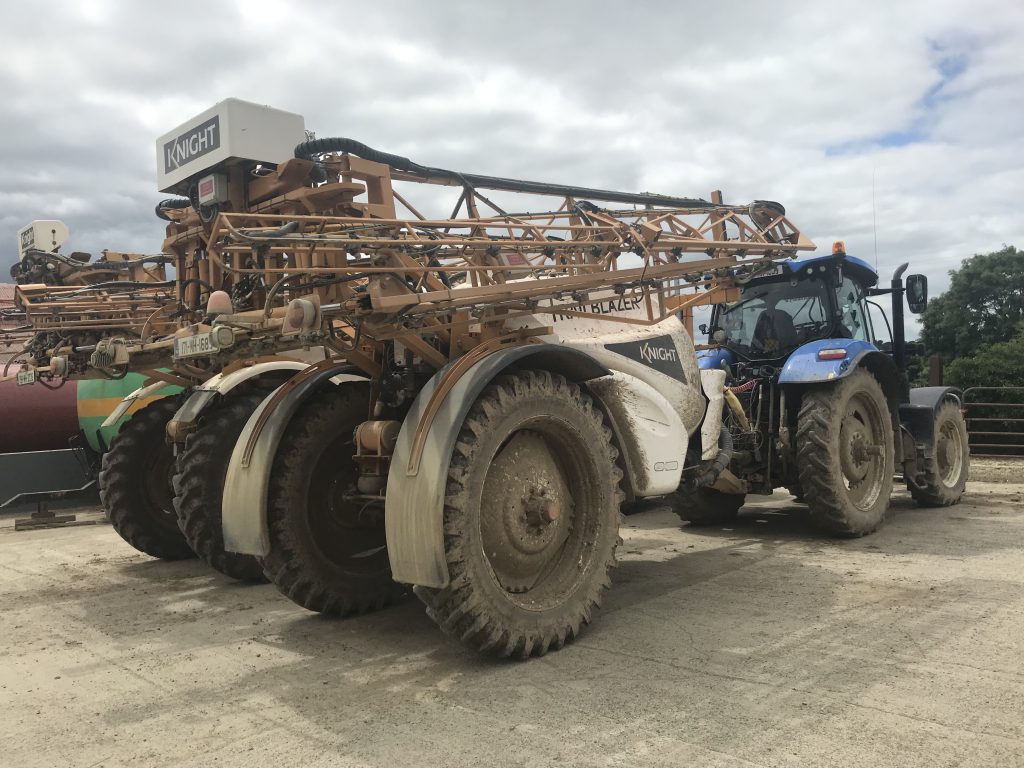 At the minute Ivan is busy preparing for the harvest along with getting the usual work done. The potatoes are sprayed every week for blight at this time of the year. Blight pressure is high at present.

Spraying is the biggest thing at the minute – once a week. We just keep blight products on and that’s it.

“We’re getting ready for digging again of course. Disinfecting sheds and washing them out. I’ve 1,500t still to go. They’re starting Thursday.

“We’ll probably finish drawing on a Friday and start digging again on a Monday. We’ll be starting the combine around that time as well and it will all hit at once. It’s overlapping,” he added.

Growing for Mr. Tayto is completely different to growing potatoes for supermarkets and growers are specialised. 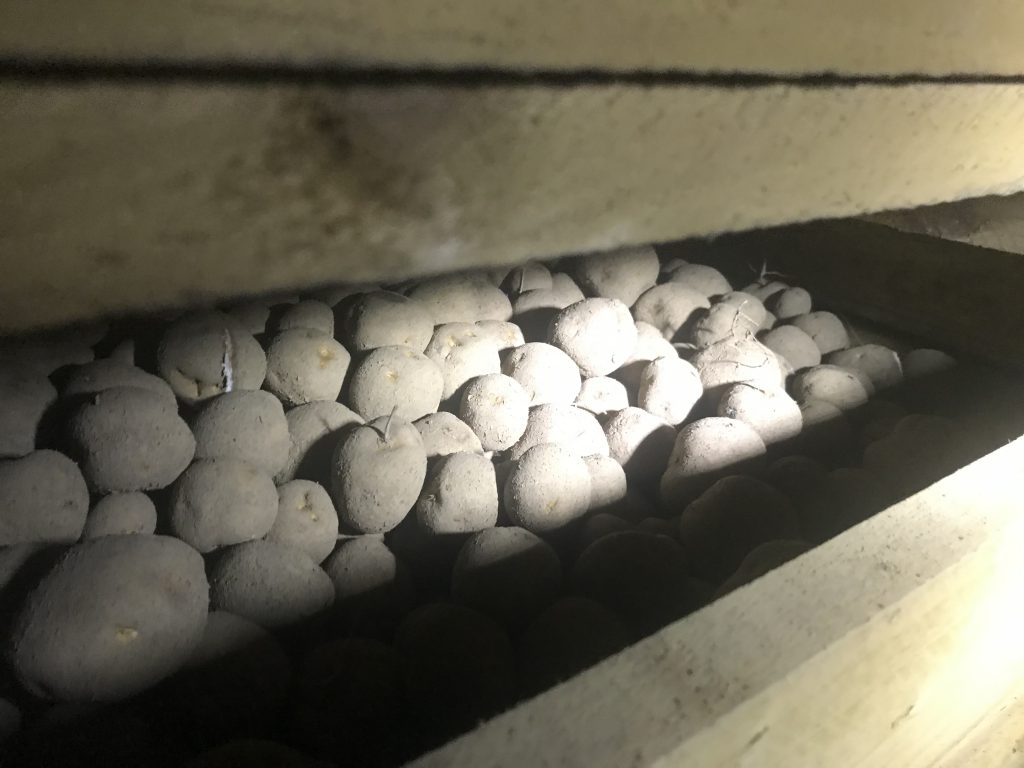 Digging is a long process and takes approximately three months. When AgriLand visited, Ivan’s self-propelled harvester was in the garage in preparation for the weeks ahead.

“We’d have all our crisping product dug by the second week of October. They go into the store in warm enough weather. They come in at a minimum of about 10°C/11°C. We dry them for about two weeks and then bring them down to the temperature we store them at – depending on the variety.”

Storage is second nature to Ivan now, but he says he got to that point by making a few mistakes along the way. He added that Tayto Snacks work with the growers.

If Ivan notices potatoes aren’t storing the way they should be he will ask Tayto to take them in early and both sides work together to ensure a quality product is delivered. 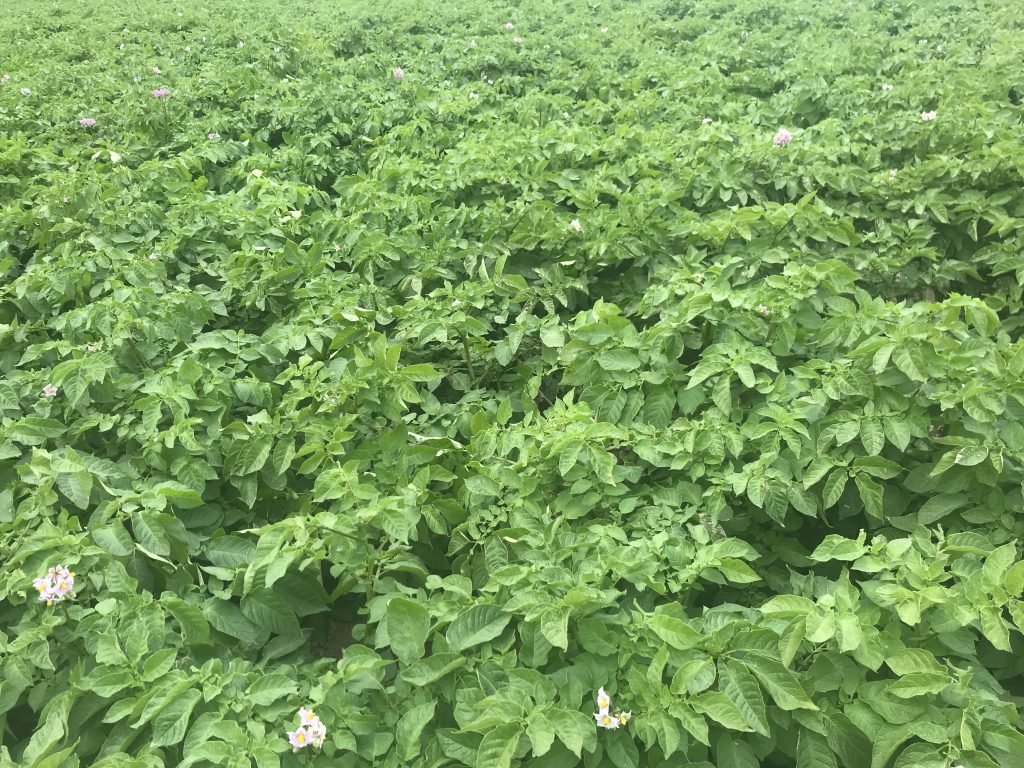 A crop of Lady Rosetta on Broadleas Farm

20 years ago Ivan stored 2,000t of potatoes and put up a store with a commitment from Tayto that they would take the product for seven years. He is now storing 5,000t. The crisp manufacturers are staying true to the Irish brand and supporting their growers, who are in turn extremely loyal.

“They’re working with us all the time. We’re testing the spuds every week. We take a sample out of all of the stores and they check them for frying and colour.

Ivan added that in an exceptional year the factory, like any other, would import a small amount of product to keep the factory going, but this is rare and in small amounts. He explained that Tayto Snacks are pushing the growers to supply all year round.

With the varieties we have now we can store a little bit longer and that will overlap into the early crop, so that’s a big help. They [Tayto Snacks] asked us to do that. They’re pushing it.

Like all farming enterprises there is a huge amount of paperwork and a few weeks ago Ivan completed an 11 hour inspection. He is part of Bórd Bia’s Origin Green and Global Gap.

Everything from crop records to electricity use on the farm was checked. Safety, quality control and labelling are all essential parts of the business and in the coming months Ivan’s daughter Sarah will join the family business. 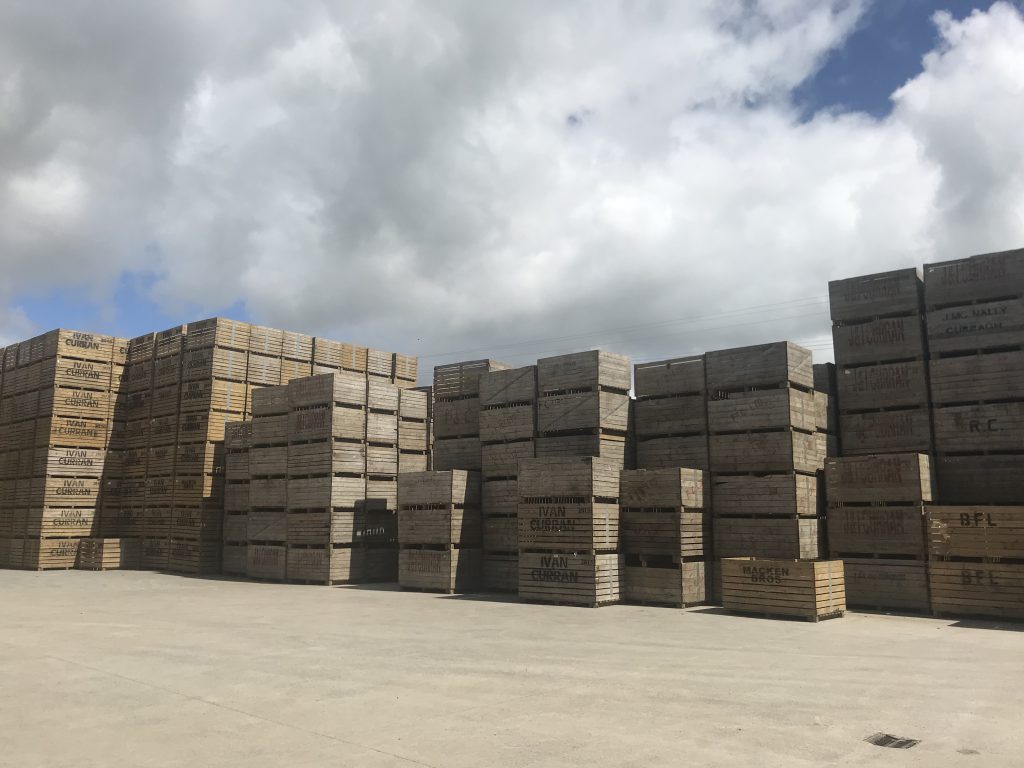 Sarah will look after the grading staff, quality control and labelling boxes. She will carry out testing, for things like bruising everyday and her husband-to-be looks after Ivan’s cattle enterprise. Keeping cattle makes sense on the farm as they are fed waste potatoes and also provide dung for the tillage land.

The farm business has grown massively and this extra help is essential for Ivan and his wife Frances (pictured at the top of the article) who both run Broadleas Farm. There are eight full-time staff on the farm throughout the year. This number rises to 22 when potatoes are being taken into store.

We start digging at the end of July and we’re grading right through to the first week in November. That’s filling all of the stores, labelling and keeping varieties together.

When we’re filling the stores, on a good day, we could pick up to 400t/day.

“You’d like to be averaging 200t/day – there’s a lot of minding, keeping and checking to make sure potatoes aren’t damaged. When we’re digging direct off the field Tayto probably take 120t/day, every week.” 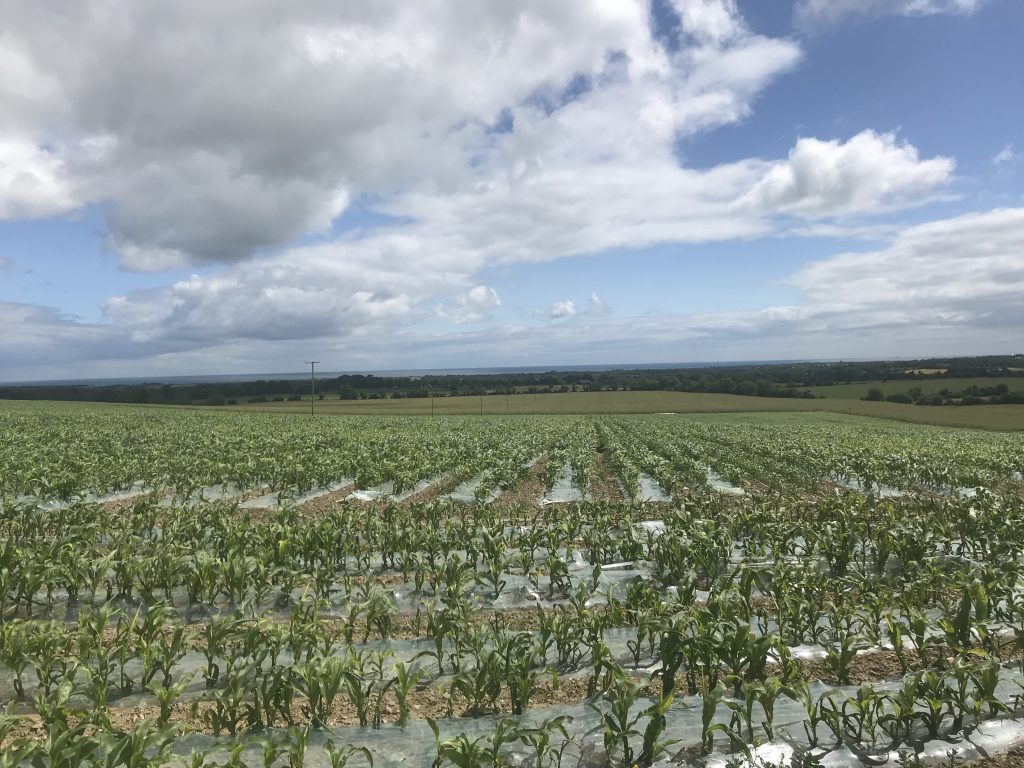 A maize crop destined for silage

Like all tillage farms, potatoes have also been affected by the declining chemical toolbox. Diquat, which is used as a dessicant, is available this season, but Ivan is making plans for the seasons ahead when its use will not be allowed.

Chopping is an option and one that Ivan has tried before, but this process can also leave crops open to disease. Ivan added that storage was difficult after chopping and the spread of black leg was a worry.

CIPC – a sprout suppressant – has also been banned. Ivan trialed a new product in his potato stores this season.

Access to land is one challenge that Ivan has been able to overcome at present, as he has built up relationships with tillage farmers who want to include potatoes in their rotation.

At present Ivan’s works to a five-year rotation of winter wheat, winter barley, oilseed rape, winter wheat and potatoes. He also grows maize on the farm for his finishing cattle.

It will be a busy farm in the next few weeks.