‘The key to sustainable production of biomass is afforestation’

Image source: Department of Agriculture, Food and the Marine Twitter

With the success of the Green Party in the recently held local and European elections, the focus for its members – from now on – will very much be on climate action and sustainability, as the country steps up a gear in the race to save the planet.

In recent years, forestry has been to the fore in Ireland as the country grappled with biodiversity; a recent report indicates that the area of the country now under forest stands at around 770,000ha – the highest level of forestry cover in the country for over 350 years.

The Forest Statistics Ireland 2019 report was published recently and it highlights that the national forest estate is now around 11% of the total land area of Ireland with 4,025ha of new forest planted in 2018.

And, with plenty of discussion around forestry in this country and the importance of planting the ‘right trees in the right place‘ the questions must be asked: Can the Green Party’s influence necessitate the change that many in rural Ireland say is now necessary for afforestation to work effectively?

Is it too late to reverse some of the damage that has already been done to the environment?

According to the party’s Forestry Policy “forests are the most important outdoor recreation facility in Ireland”.

The policy also points to the importance of encouraging “more use of private woodlands” and further supports for the development of community woodlands, as well as “an increase” in the area of protected forests in Ireland.

There is also a suggestion that a re-examination of the current replanting requirement in the 1946 Forestry Act be carried out.

The policy document adds: “This will mean that landowners are no longer necessitated to replant on sites that contravene water quality, biodiversity or heritage objectives.”

The map below, meanwhile, points to forestry development in Ireland since the 1900s. 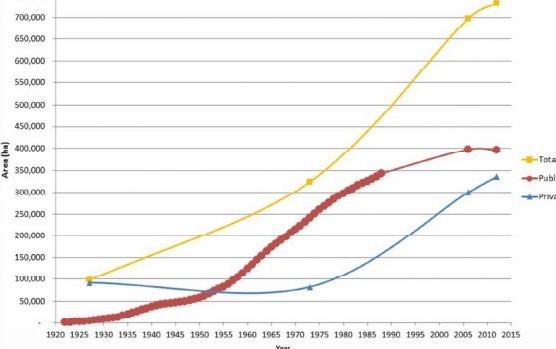 The document goes on then to point out that the underlying land assets, commercial forests and amenity woodlands of Coillte should be retained in public ownership.

“Coillte must reveal a detailed breakdown of its revenues between timber sales, property sales, wind farm leases and timber leases as well as all its other principle activities,” it adds.

Meanwhile, in a statement to AgriLand, the Green Party said that agriculture is wholly dependent on the natural environment and its associated functions and services for the delivery of agricultural goods.

It also pointed out that the country’s natural landscape and its biodiversity – land, soil and soil biota, seeds for crops, water sources, trees and hedgerows for stock proofing and shelter and sources of predators for natural pest control – provides the backdrop and the resources for the sector.

Advertisement
The party then highlighted the “several challenges” the country’s natural environment faces “from current Government policy in relation to the agriculture policy”.

It says the sector faces increasing intensification of agriculture which, it adds, “has been prompted in recent years by the active promotion of the industry-led, Government-supported Food Harvest 2020”.

“This,” the spokesperson added, “will continue to exert considerable pressure on the environment”.

Increasing cattle numbers in particular, caused by the rapid expansion of the dairy sector, will result in increasing methane emissions.

The map blow provides some insight into the new national approach to river basin management planning in this country. 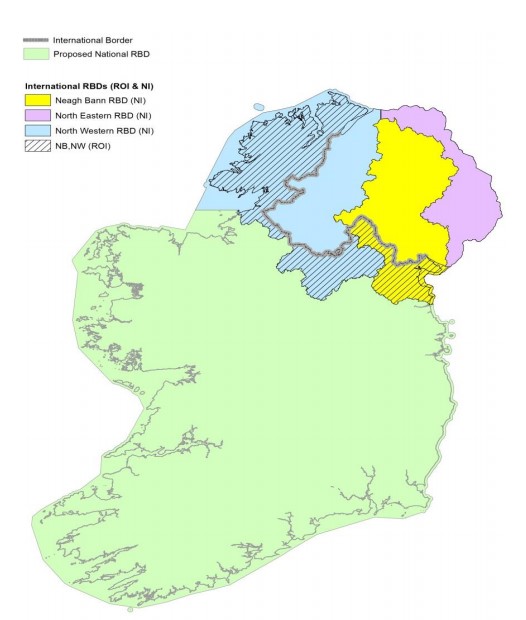 The Green Party’s spokesperson warned, however, that increasing agricultural output “as envisaged by Food Harvest 2020” poses a major challenge to achieving the water quality objectives of the Water Framework Directive.

“In addition, the expansion of farm holdings could lead to the loss of biodiversity in marginal land, hedgerows, field margins and trees,” he said.

The Green Party also says that an increase in “the sustainable production of biomass for the newly developing and valuable renewable energy sector on suitable land” cannot be understated.

“There must be a minimum of 10,000ha of afforestation per year, but with the aim of achieving 15,000ha per annum until 2035, including significantly increased levels beyond the 38% of broadleaves planted in 2010,” the spokesperson continued.

15% of new forest must be devoted to biodiversity.

“The Irish forest industry now provides over 1% of GDP and employs over 16,000 people, mostly in rural areas so there must be a diversion of funds from the Carbon Fund into afforestation.”

'The key to sustainable production of biomass is afforestation'

'We must take responsibility and stand over our environmental credentials'