It has emerged that 24% of farmer respondents to a recent AgriLand survey have been refused access to credit or finance.

As part of the ‘state of the nation’ survey – conducted with almost 3,000 farmer participants in recent days by AgriLand and Empathy Research last month – respondents were asked the question: “Have you ever been refused access to credit or finance?”

24% of respondents answered “yes” to this question, with the remaining 76% selecting “no”.

2,921 respondents participated in this broad-ranging, open (online) survey, conducted through AgriLand. The survey opened on Wednesday, September 11, and closed on Monday, September 16.

Female respondents had a slightly higher “yes” response percentage of 26% compared to the 24% proportion of their male counterparts.

In terms of age groups, the age category 55-59 had the highest proportion of “yes” answers, with 33% of participants in this category confirming they had been refused.

Interestingly, the lowest proportion of affirmative answers was found to be in the 60+ age category – just 15% of these said they had been refused.

In terms of enterprise, those who identified as “primarily sheep farmers” had the highest proportion of “yes” answers, with 29% saying they had been refused credit at some point.

However, “any” degree of dairy, sheep and tillage enterprises were joint on the lowest proportion, with each of these categories level on 23%.

There was no difference between full-time and part-time farmers – some 24% of both said “yes” they had been refused credit before.

In a follow-up question, respondents were then asked: “Do you think you are negatively viewed by financial institutions when it comes to access to finance and credit because you are a farmer or from a farming background?”

30% of participants said “yes” in response to this question, while 16% said they don’t know. Just 53% of farmers said “no”, they do not believe they are negatively viewed.

A higher percentage of female respondents answered affirmative compared to males – with 40% saying “yes” compared to 30% of males. Female participants had a lower “no” response percentage also with just 43% saying “no” compared to 54% of men.

Once again, age-wise, the category with the highest proportion of “yes” answers was the 55-59 age group; 36% of these believe they are negatively viewed by financial institutions due to their farming traits. This was reflected in the percentage saying “no”, some 46% – the lowest “no” proportion recorded.

In terms of breakdown by enterprise, the enterprise with the highest “yes” proportion was the “primarily beef farmer” group – 37% of these felt they were negatively perceived, with just 46% saying “no”.

The lowest “yes” percentage was tied between the dairy and sheep farmers, with both on 21% for “yes” and 66% for “no”.

Finally, in terms of difference between full-time and part-time farmer respondents, 34% of part-time participants said “yes” to the question, with 20% saying they don’t know and 46% saying “no”. 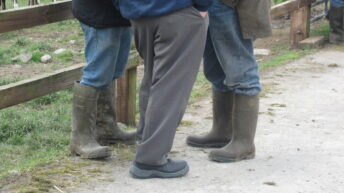